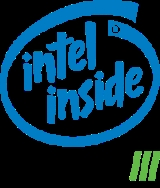 Overview
The Pentium III brand refers to Intel's 32-bit
32-bit
The range of integer values that can be stored in 32 bits is 0 through 4,294,967,295. Hence, a processor with 32-bit memory addresses can directly access 4 GB of byte-addressable memory....
x86 desktop and mobile microprocessor
Microprocessor
A microprocessor incorporates the functions of a computer's central processing unit on a single integrated circuit, or at most a few integrated circuits. It is a multipurpose, programmable device that accepts digital data as input, processes it according to instructions stored in its memory, and...
s based on the sixth-generation P6 microarchitecture
P6 (microarchitecture)
The P6 microarchitecture is the sixth generation Intel x86 microarchitecture, implemented by the Pentium Pro microprocessor that was introduced in November 1995. It is sometimes referred to as i686. It was succeeded by the NetBurst microarchitecture in 2000, but eventually revived in the Pentium M...
introduced on February 26, 1999. The brand's initial processors were very similar to the earlier Pentium II
Pentium II
The Pentium II brand refers to Intel's sixth-generation microarchitecture and x86-compatible microprocessors introduced on May 7, 1997. Containing 7.5 million transistors, the Pentium II featured an improved version of the first P6-generation core of the Pentium Pro, which contained 5.5 million...
-branded microprocessors. The most notable difference was the addition of the SSE
Streaming SIMD Extensions
In computing, Streaming SIMD Extensions is a SIMD instruction set extension to the x86 architecture, designed by Intel and introduced in 1999 in their Pentium III series processors as a reply to AMD's 3DNow! . SSE contains 70 new instructions, most of which work on single precision floating point...
instruction set
Instruction set
An instruction set, or instruction set architecture , is the part of the computer architecture related to programming, including the native data types, instructions, registers, addressing modes, memory architecture, interrupt and exception handling, and external I/O...
(to accelerate floating point
Floating point
In computing, floating point describes a method of representing real numbers in a way that can support a wide range of values. Numbers are, in general, represented approximately to a fixed number of significant digits and scaled using an exponent. The base for the scaling is normally 2, 10 or 16...
and parallel calculations), and the introduction of a controversial serial number embedded in the chip during the manufacturing process.
Similarly to the Pentium II it superseded, the Pentium III was also accompanied by the Celeron
Celeron
Celeron is a brand name given by Intel Corp. to a number of different x86 computer microprocessor models targeted at budget personal computers....
brand for lower-end versions, and the Xeon
Xeon
The Xeon is a brand of multiprocessing- or multi-socket-capable x86 microprocessors from Intel Corporation targeted at the non-consumer server, workstation and embedded system markets.-Overview:...
for high-end (server and workstation) derivatives.

What is the importance of the pentium III processor
More
x