Encyclopedia
The pelycosaurs are an informal grouping (previously considered an order
Order (biology)
In scientific classification used in biology, the order is# a taxonomic rank used in the classification of organisms. Other well-known ranks are life, domain, kingdom, phylum, class, family, genus, and species, with order fitting in between class and family...
) composed of basal
Basal (phylogenetics)
In phylogenetics, a basal clade is the earliest clade to branch in a larger clade; it appears at the base of a cladogram.A basal group forms an outgroup to the rest of the clade, such as in the following example:...
or primitive Late Paleozoic
Paleozoic
The Paleozoic era is the earliest of three geologic eras of the Phanerozoic eon, spanning from roughly...
synapsid
Synapsid
Synapsids are a group of animals that includes mammals and everything more closely related to mammals than to other living amniotes. They are easily separated from other amniotes by having an opening low in the skull roof behind each eye, leaving a bony arch beneath each, accounting for their name...
amniotes. Some species were quite large and could grow up to 3 meters or more, although most species were much smaller. Because more advanced groups of synapsids evolved directly from 'pelycosaurs', the term had fallen out of favor among scientists by the 21st century, and is only used informally if at all in the modern scientific literature.

The pelycosaurs appeared during the Late
Pennsylvanian
The Pennsylvanian is, in the ICS geologic timescale, the younger of two subperiods of the Carboniferous Period. It lasted from roughly . As with most other geochronologic units, the rock beds that define the Pennsylvanian are well identified, but the exact date of the start and end are uncertain...
Carboniferous
Carboniferous
The Carboniferous is a geologic period and system that extends from the end of the Devonian Period, about 359.2 ± 2.5 Mya , to the beginning of the Permian Period, about 299.0 ± 0.8 Mya . The name is derived from the Latin word for coal, carbo. Carboniferous means "coal-bearing"...
and reached their acme in the early part of the Permian
Permian
The PermianThe term "Permian" was introduced into geology in 1841 by Sir Sir R. I. Murchison, president of the Geological Society of London, who identified typical strata in extensive Russian explorations undertaken with Edouard de Verneuil; Murchison asserted in 1841 that he named his "Permian...
Period, remaining the dominant land animals for some 40 million years. A few continued into the late Permian. They were succeeded by the therapsids.

At least two pelycosaur clades independently evolved a tall sail, consisting of elongated vertebral spines: the edaphosaurid
Edaphosauridae
Edaphosauridae is a family of mostly large advanced, Late Pennsylvanian to early Permian pelycosaurs.They were the earliest known herbivorous amniotes, and along with the Diadectidae the earliest known herbivorous tetrapods...
s and the sphenacodontid
Sphenacodontidae
Sphenacodontidae is a family of small to large, advanced, carnivorous, Late Pennsylvanian to middle Permian pelycosaurs. Primitive forms were generally small in size , but during the later part of the early Permian these animals grew progressively larger , to become the top predators of their...
s. In life, this would have been covered by skin, and possibly functioned as a thermoregulatory
Thermoregulation
Thermoregulation is the ability of an organism to keep its body temperature within certain boundaries, even when the surrounding temperature is very different...
device and/or for mating display. Pelycosaur fossils have been found mainly in Europe
Europe
Europe is, by convention, one of the world's seven continents. Comprising the westernmost peninsula of Eurasia, Europe is generally 'divided' from Asia to its east by the watershed divides of the Ural and Caucasus Mountains, the Ural River, the Caspian and Black Seas, and the waterways connecting...
and North America
North America
North America is a continent wholly within the Northern Hemisphere and almost wholly within the Western Hemisphere. It is also considered a northern subcontinent of the Americas...
, although some small, late-surviving forms are known from Russia
Russia
Russia or , officially known as both Russia and the Russian Federation , is a country in northern Eurasia. It is a federal semi-presidential republic, comprising 83 federal subjects...
and South Africa
South Africa
The Republic of South Africa is a country in southern Africa. Located at the southern tip of Africa, it is divided into nine provinces, with of coastline on the Atlantic and Indian oceans...
.

Unlike lepidosauria
Lepidosauria
The Lepidosauria are reptiles with overlapping scales. This subclass includes Squamata and Sphenodontidae. It is a monophyletic group and therefore contains all descendents of a common ancestor. The squamata includes snakes, lizards, tuataras, and amphisbaenia. Lepidosauria is the sister taxon...
n reptiles, pelycosaurs lacked epidermal scale
Scale (zoology)
In most biological nomenclature, a scale is a small rigid plate that grows out of an animal's skin to provide protection. In lepidopteran species, scales are plates on the surface of the insect wing, and provide coloration...
s. Fossil evidence from some ophiacodonts shows that parts of the skin was covered in rows of osteoderm
Osteoderm
Osteoderms are bony deposits forming scales, plates or other structures in the dermal layers of the skin. Osteoderms are found in many groups of extant and extinct reptiles, including lizards, various groups of dinosaurs , crocodilians, phytosaurs, aetosaurs, placodonts, and hupehsuchians...
s, presumably overlain by horny scute
Scute
A scute or scutum is a bony external plate or scale, as on the shell of a turtle, the skin of crocodilians, the feet of some birds or the anterior portion of the mesonotum in insects.-Properties:...
s. The belly was covered in rectangular scutes, looking like those present in crocodiles. Parts of the skin not covered in scutes could have had naked, glandular skin like that found in some mammal
Mammal
Mammals are members of a class of air-breathing vertebrate animals characterised by the possession of endothermy, hair, three middle ear bones, and mammary glands functional in mothers with young...
s. Dermal scutes are also found in a diverse number of extant mammals with conservative body types, such as in the tails of certain rodent
Rodent
Rodentia is an order of mammals also known as rodents, characterised by two continuously growing incisors in the upper and lower jaws which must be kept short by gnawing....
s, sengis, moonrat
Moonrat
The moonrat is a species of mammal in the Erinaceidae family. It is the only species in the genus Echinosorex. The species name is sometimes given as E. gymnurus, but this is incorrect. There are two subspecies: E. g. gymnura is found in Sumatra and on the Malay Peninsula; E. g...
s, the opossums and other marsupials, and as regular dermal armour with underlying bone in the armadillo
Armadillo
Armadillos are New World placental mammals, known for having a leathery armor shell. Dasypodidae is the only surviving family in the order Cingulata, part of the superorder Xenarthra along with the anteaters and sloths. The word armadillo is Spanish for "little armored one"...
.

In 1940 the group was reviewed in detail and every species known at the time described (and many illustrated) in an important monograph by Alfred Sherwood Romer and Llewellyn Price.

Pelycosauria is a paraphyletic taxon because it excludes the therapsids. For that reason the term is not used in some modern books. Eupelycosauria
Eupelycosauria
The Eupelycosauria originally referred to a suborder of 'pelycosaurs' , but has been redefined to designate a clade of synapsids that includes most pelycosaurs, as well as all therapsids and mammals...
is used to designate the clade that includes most Pelycosaurs along with the Therapsida and the Mammals. In contrast to "Pelycosaurs", this is a monophyletic group. Caseasauria
Caseasauria
The Caseasauria are one of the two main clades of early synapsids, the other being the Eupelycosauria. They are currently known only from the Permian, and include two superficially different families, the small insectivorous or carnivorous Eothyrididae, and the large herbivorous CaseidaeThese two...
refers to a pelycosaur side-branch or clade that did not leave any descendants.

The pelycosaurs appear to have been a group of synapsids that had direct ancestral links with the mammalia, having differentiated teeth and a developing hard palate.

Well-known pelycosaurs include the genera
Genus
In biology, a genus is a low-level taxonomic rank used in the biological classification of living and fossil organisms, which is an example of definition by genus and differentia...
Dimetrodon
Dimetrodon
Dimetrodon was a predatory synapsid genus that flourished during the Permian period, living between 280–265 million years ago ....
, Sphenacodon
Sphenacodon
Sphenacodon was a pelycosaur that was about in length. Sphenacodon belongs to the family Sphenacodontidae, a lineage that was related to the therapsids...
, Edaphosaurus
Edaphosaurus
Edaphosaurus is a genus of prehistoric synapsid which lived around 303 to 265 million years ago, during the late Carboniferous to early Permian periods. The name Edaphosaurus means "ground lizard" and is derived from the Greek edaphos/εδαφος and σαυρος/sauros...
, and Ophiacodon
Ophiacodon
Ophiacodon was a large pelycosaur. Its fossils were found in Joggins, Nova Scotia, Canada.Ophiacodon was at least two meters in length, and the largest species were up to . It is estimated to have weighed from . The size of the various species increased during the Early Permian epoch until its...
. 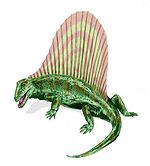 In traditional classification, the order Pelycosauria is paraphyletic--that is, it is a grouping of animals that does not contain all descendants of a common ancestor, as is often required by a different system of naming organisms, phylogenetic nomenclature
Phylogenetic nomenclature
Phylogenetic nomenclature or phylogenetic taxonomy is an alternative to rank-based nomenclature, applying definitions from cladistics . Its two defining features are the use of phylogenetic definitions of biological taxon names, and the lack of obligatory ranks...
. In traditional taxonomy, Therapsida was separated from Pelycosauria in its own biological order, and mammal
Mammal
Mammals are members of a class of air-breathing vertebrate animals characterised by the possession of endothermy, hair, three middle ear bones, and mammary glands functional in mothers with young...
s were separated from both as their own class, though such usage has not been continued by a majority of scientists since the 1990s.

In phylogenetic nomenclature, the "Pelycosauria" is not used, since it does not constitute a clade
Clade
A clade is a group consisting of a species and all its descendants. In the terms of biological systematics, a clade is a single "branch" on the "tree of life". The idea that such a "natural group" of organisms should be grouped together and given a taxonomic name is central to biological...
(a group of organisms descended from one common ancestor and including all the descendants of that ancestor) because the group excludes the therapsids. Instead, it represents a paraphyletic "grade" of basal synapsids leading up to the clade Therapsida. The following cladogram
Cladogram
A cladogram is a diagram used in cladistics which shows ancestral relations between organisms, to represent the evolutionary tree of life. Although traditionally such cladograms were generated largely on the basis of morphological characters, DNA and RNA sequencing data and computational...
follows the one found on Mikko's Phylogeny Archive.