Encyclopedia
Pecorino is the name of a family of hard Italian
Italian cuisine
Italian cuisine has developed through centuries of social and political changes, with roots as far back as the 4th century BCE. Italian cuisine in itself takes heavy influences, including Etruscan, ancient Greek, ancient Roman, Byzantine, Jewish and Arab cuisines...
cheese
Cheese
Cheese is a generic term for a diverse group of milk-based food products. Cheese is produced throughout the world in wide-ranging flavors, textures, and forms....
s made from ewe's milk. The word derives from pecora meaning ‘sheep’, also from the Latin pecora meaning livestock
Livestock
Livestock refers to one or more domesticated animals raised in an agricultural setting to produce commodities such as food, fiber and labor. The term "livestock" as used in this article does not include poultry or farmed fish; however the inclusion of these, especially poultry, within the meaning...
.

Of the four main varieties of Pecorino, all of which have Protected Designation of Origin
Protected designation of origin
Protected Geographical Status is a legal framework defined in European Union law to protect the names of regional foods. Protected Designation of Origin , Protected Geographical Indication and Traditional Speciality Guaranteed are distinct regimes of geographical indications within the framework...
(PDO) status under European Union law
European Union law
European Union law is a body of treaties and legislation, such as Regulations and Directives, which have direct effect or indirect effect on the laws of European Union member states. The three sources of European Union law are primary law, secondary law and supplementary law...
, Pecorino Romano
Pecorino Romano
Pecorino Romano is a hard, salty Italian cheese, suitable primarily for grating, made out of sheep milk . Pecorino Romano was produced in Latium up to 1884 when, due to the prohibition issued by the city council of salting the cheese inside their shops in Rome, many producers moved to the island of...
is probably the best known outside Italy
Italy
Italy , officially the Italian Republic languages]] under the European Charter for Regional or Minority Languages. In each of these, Italy's official name is as follows:;;;;;;;;), is a unitary parliamentary republic in South-Central Europe. To the north it borders France, Switzerland, Austria and...
, especially in the United States
United States
The United States of America is a federal constitutional republic comprising fifty states and a federal district...
which has been an important export market for the cheese since the 19th century. Most Pecorino Romano is produced on the island of Sardinia
Sardinia
Sardinia is the second-largest island in the Mediterranean Sea . It is an autonomous region of Italy, and the nearest land masses are the French island of Corsica, the Italian Peninsula, Sicily, Tunisia and the Spanish Balearic Islands.The name Sardinia is from the pre-Roman noun *sard[],...
, though its production is also allowed in Lazio and in the Tuscan
Tuscany
Tuscany is a region in Italy. It has an area of about 23,000 square kilometres and a population of about 3.75 million inhabitants. The regional capital is Florence ....
Province of Grosseto
Province of Grosseto
The Province of Grosseto is a province in the Tuscany region of Italy. Its capital is the city of Grosseto.-Geography:It has an area of 4,504 km², and a total population of 227.498...
. 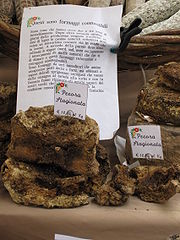 The other three mature PDO cheeses are the Pecorino Sardo
Pecorino Sardo
Pecorino sardo, also known as fiore sardo, is a firm cheese from the Italian island of Sardinia which is made from sheep milk: specifically from the milk of the local Sardinian breed. It was awarded Denominazione d'Origine status in 1991 and granted Protected designation of origin protection in...
from Sardinia; Pecorino Toscano
Pecorino Toscano
Pecorino Toscano is a firm-textured ewe’s milk cheese produced in Tuscany. Since 1996 it has enjoyed protected designation of origin status.-Ancient origins and current regional distribution:...
, the Tuscan relative of Pecorino Sardo (made almost exclusively by Sardinians who emigrated to Southern Tuscany with their flocks in the 1950s); and Pecorino Siciliano
Pecorino Siciliano
Pecorino Siciliano is an origin-protected firm sheep milk cheese from the Italian island and region of Sicily. It is produced throughout the island, but especially in the provinces of Agrigento, Caltanissetta, Enna, Trapani and Palermo...
(or Picurinu Sicilianu in Sicilian
Sicilian language
Sicilian is a Romance language. Its dialects make up the Extreme-Southern Italian language group, which are spoken on the island of Sicily and its satellite islands; in southern and central Calabria ; in the southern parts of Apulia, the Salento ; and Campania, on the Italian mainland, where it is...
) from Sicily.

All come in a variety of styles depending on how long they have been aged. The more matured cheeses, referred to as stagionato (“seasoned” or “aged” ), are harder but still crumbly in texture and have a decisive buttery and nutty flavours. The other two types “semi-stagionato” and “fresco” have softer texture and milder cream and milk tastes.

In the South it is traditional to add black peppercorns or red chili flakes to Pecorino. Today many other additions are made, for example walnuts or rucola or tiny pieces of white or black truffle. In Sardinia
Sardinia
Sardinia is the second-largest island in the Mediterranean Sea . It is an autonomous region of Italy, and the nearest land masses are the French island of Corsica, the Italian Peninsula, Sicily, Tunisia and the Spanish Balearic Islands.The name Sardinia is from the pre-Roman noun *sard[],...
, the larvae of the cheese fly
Cheese fly
Cheese flies are members of the family Piophilidae of flies. Most are scavengers in animal products and fungi. The best-known member of the family is Piophila casei. It is a small fly, about four mm long, found worldwide. The fly's larva infests cured meats, smoked fish, cheeses, and decaying...
are intentionally introduced into Pecorino Sardo
Pecorino Sardo
Pecorino sardo, also known as fiore sardo, is a firm cheese from the Italian island of Sardinia which is made from sheep milk: specifically from the milk of the local Sardinian breed. It was awarded Denominazione d'Origine status in 1991 and granted Protected designation of origin protection in...
to produce a local delicacy called casu marzu
Casu marzu
Casu marzu is a traditional Sardinian sheep milk cheese, notable for containing live insect larvae...
.

A good Pecorino Stagionato is often the finish of a meal, served with pears and walnuts or drizzled with strong chestnut honey. Pecorino is also often used to finish pasta dishes, and used to be the natural choice for most Italian regions from Umbria down to Sicily, rather than the more expensive Parmigiano-Reggiano. It is still preferred today for the pasta dishes of Rome and Lazio, for example Pasta dressed with sugo all'amatriciana
Sugo all'amatriciana
-External links:*** in Italian and English* and in Italian* and in English ***...
, Pasta Cacio e Pepe, and Pasta alla Gricia.
The source of this article is wikipedia, the free encyclopedia.  The text of this article is licensed under the GFDL.