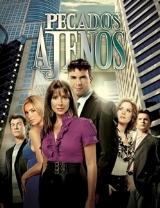 Encyclopedia
Pecados Ajenos is a Spanish-language telenovela
Telenovela
A telenovela is a limited-run serial dramatic programming popular in Latin American, Portuguese, and Spanish television programming. The word combines tele, short for televisión or televisão , and novela, a Spanish or Portuguese word for "novel"...
produced by the United States-based television network Telemundo
Telemundo
Telemundo is an American television network that broadcasts in Spanish. The network is the second-largest Spanish-language content producer in the world, and the second-largest Spanish-language network in the United States, behind Univision....
. This limited-run series was shot in Florida by Telemundo Studios, Miami
Telemundo Television Studios
Telemundo Television Studios is a division of NBC Universal that develops original programming in Spanish.-History:In 2005, Telemundo Communications Group, announced the acquisition of the totality of its property next to RTI Colombia, Telemundo-RTI, to create Telemundo Studios Television and...
. It is also known as A Chance to Love This telenovela was sold to 16 countries around the world.

Pecados Ajenos replaced Amor Mio
Amor Mío
Amor Mío is a Spanish language comedy telecomedy, produced in Argentina by Telefe and for Mexico by Televisa. This romantic comedy features Abril Juárez and Marcos Sinclair, two singles who are forced to share an apartment in Buenos Aires even though they cannot stand each other...
in Telemundo
Telemundo
Telemundo is an American television network that broadcasts in Spanish. The network is the second-largest Spanish-language content producer in the world, and the second-largest Spanish-language network in the United States, behind Univision....
's 10 p.m. (ET/PT) time slot on October 8, 2007. Lorena Rojas
Lorena Rojas
Lorena Rojas is a Mexican actress and singer, a song writer and best known for her leading roles in popular Telenovelas.- Biography :...
and Mauricio Islas
Mauricio Islas
Mauricio Islas is a Mexican television and film actor. He is best known for his work in telenovelas.-Early life:...
were paired together for the first time in this saga of love, marriage, betrayal, parenthood, friendship and passion.

Show was launched for example in Poland on Puls TV and in Romania
Romania
Romania is a country located at the crossroads of Central and Southeastern Europe, on the Lower Danube, within and outside the Carpathian arch, bordering on the Black Sea...
on Acasa TV.
In Georgia
Georgia (country)
Georgia is a sovereign state in the Caucasus region of Eurasia. Located at the crossroads of Western Asia and Eastern Europe, it is bounded to the west by the Black Sea, to the north by Russia, to the southwest by Turkey, to the south by Armenia, and to the southeast by Azerbaijan. The capital of...
, channel Rustavi 2
Rustavi 2
Rustavi 2 Broadcasting Company , better known as Rustavi 2, is the most successful private television broadcasting company in Georgia. The Rustavi, based in Tbilisi, was founded in 1994 in the town of Rustavi. It is a privately owned free to air terrestrial broadcaster that currently reaches around...
broadcasted the novel.

Screenwriter Eric Vonn penned this urban melodrama set in West Palm Beach and Pompano Beach. It features star-crossed lovers who fall in love at the worst possible moment. As with most of its telenovelas, the network broadcast English subtitles as closed captions on CC3. Many scenes were shot on location in Virginia Key
Virginia Key
Virginia Key is a barrier island in Miami, Florida, United States in Biscayne Bay, south of Brickell and north of Key Biscayne. It accessible from the mainland via the Rickenbacker Causeway....
.

Natalia and Adrián are strangers who live in different cities but discover in an instant that they belong together. They were both married for over twenty years, and each has two beautiful young children. Their lives are quite similar—and both are unhappy and frustrated. Destiny brings the two together when they are each on the verge of divorce.

When the pair falls madly in love, they face opposition from Elena, Adrián's hysterical, paranoid and resentful wife, Rogelio, Natalia's alcoholic husband who humiliates her, and Inés, who envies and hates Natalia while pretending to be her friend. Meanwhile Ágata, Natalia's despotic mother-in-law, terrorizes the heroine's life and has stripped her of the fortune which she inherited from her parents. Ágata teams up with Manuel, a treacherous and ambitious villain, to plot Natalia's worst tragedy: separating her from her most beloved treasure, her children.

Natalia and Adrián search for love, companionship and fulfillment on a road full of bitterness, disappointment and misunderstanding. Their story is closely related to that of their respective children. They must find love amid family conflict, jealousy and betrayal.
In the end we discover it was all a dream by Natalia while in a two year coma, and that everything is about to happen as she dreamt it.

Main Cast in Order of Appearance


Secondary Cast in Order of Appearance

When Telemundo
Telemundo
Telemundo is an American television network that broadcasts in Spanish. The network is the second-largest Spanish-language content producer in the world, and the second-largest Spanish-language network in the United States, behind Univision....
announced this project in its 2007 upfront
Upfront
In the North American television industry, an upfront is a meeting hosted at the start of important advertising sales periods by television network executives, attended by the press and major advertisers...
presentation, it was titled "El Otro Lado del Amor" ("The Other Side of Love"). The network then launched promotional
Television advertisement
A television advertisement or television commercial, often just commercial, advert, ad, or ad-film – is a span of television programming produced and paid for by an organization that conveys a message, typically one intended to market a product...
teaser
Teaser
A teaser is a type of gambling bet that allows the bettor to combine his bets on two different games. The bettor can adjust the point spreads for the two games, but realizes a lower return on the bets in the event of a win....
s on July 2, 2007 calling the show "Pecados Ajenos". In addition there were multiple cast departures: Aylín Mújica
Aylín Mújica
Aylín Mújica is a Cuban actress, model, and ballet dancer who currently lives in Mexico City, Mexico.- Career :Mújica began modeling at age 13. She posed nude in the Spanish magazine Interviu and appeared in a sexy photoshoot at the H para Hombres magazine as well...
as Ines Vallejo, Susana Dosamantes
Susana Dosamantes
Susana Dosamantes , is a Mexican actress. She is the mother of Mexican pop diva Paulina Rubio, and has worked in around 50 movies and TV series, including a number of telenovelas...
as Agata Mercernario, Alex Sirvent, Alfredo Torres (went to Madre Luna
Madre Luna
Madre Luna is a Spanish-language telenovela produced by the United States-based television network Telemundo and RTI Colombia. This limited-run series, also known as Grains of Love, debuted on July 2, 2007. Veteran telenovela writer Julio Jiménez developed the story as a vehicle for star Amparo...
), Géraldine Bazán
Géraldine Bazán
Rosalba Géraldine Bazán Ortíz is a Mexican actress, singer, and anchorwoman currently living in Miami. She's part of Women Fair, Amigos for Kids activities, Latin Book Festivals, in Houston, Dallas, Los Angeles, Chicago and New York, In her spare time Geraldine likes to support causes such as the...
as Gloria Mercernario (took a role in Victoria
Victoria (Telemundo Series)
Victoria is the title of a Spanish-language telenovela about a woman who falls in love with a dashing younger man, when her marriage collapses around her. It is produced by the United States-based television network Telemundo and RTI Colombia. This limited-run series debuted in the US on December...
) and Alejandro Chabán
Alejandro Chabán
Alejandro José Chabán Rodríguez is a Venezuelan actor and model who has performed in both English- and Spanish-language productions. He is a U.S. citizen....
.

Filming of Pecados Ajenos was scheduled to begin in July, 2007, with the debut expected in August. On the set in Southwest Ranches, Florida
Southwest Ranches, Florida
Southwest Ranches, located on the eastern edge of the Florida Everglades, southwest of Fort Lauderdale, is Broward County's 30th incorporated place, having incorporated in the year 2000 to avoid annexation by the city of Pembroke Pines and to preserve its semi-rural lifestyle...
, the crew worked a 12-hour day, during which they shot one and a half episodes' worth of scenes. Locations included Davie, Wellington, Pompano Beach and Palm Beach, Florida. David Posada and Danny Gavidia directed the series.

As with many telenovelas it produces in-house, Telemundo used product placement
Product placement
Product placement, or embedded marketing, is a form of advertisement, where branded goods or services are placed in a context usually devoid of ads, such as movies, music videos, the story line of television shows, or news programs. The product placement is often not disclosed at the time that the...
within the show. Best Buy was to appear prominently in the show, with Adrian's son Alfredo working at one of the stores, but this never aired. Also, Toyota was to sponsor a 30-second replay of an important scene at the end of seven episodes. The Pledge and Windex cleaning products did appear in various scenes, as did Walgreens. The debut episode aired commercial-free and sponsored by Kraft Foods' DiGiorno
DiGiorno
DiGiorno is a brand of frozen pizzas sold in the United States, owned by Nestlé. In Canada, Nestlé markets a largely identical line of pizzas under the Delissio brand....
frozen pizzas.