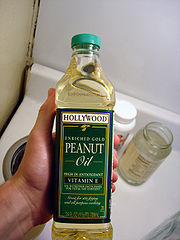 Peanut oil is an organic material oil
Oil
An oil is any substance that is liquid at ambient temperatures and does not mix with water but may mix with other oils and organic solvents. This general definition includes vegetable oils, volatile essential oils, petrochemical oils, and synthetic oils....
derived from peanut
Peanut
The peanut, or groundnut , is a species in the legume or "bean" family , so it is not a nut. The peanut was probably first cultivated in the valleys of Peru. It is an annual herbaceous plant growing tall...
s, noted to have the aroma and taste
Taste
Taste is one of the traditional five senses. It refers to the ability to detect the flavor of substances such as food, certain minerals, and poisons, etc....
of its parent legume.

It is often used in Chinese
Chinese cuisine
Chinese cuisine is any of several styles originating in the regions of China, some of which have become highly popular in other parts of the world – from Asia to the Americas, Australia, Western Europe and Southern Africa...
, South Asian
South Asian cuisine
South Asian cuisine, also known as Desi cuisine, includes the cuisines from the Indian subcontinent. It has roots in South Asia, including practices taken from the Hindu beliefs practiced by the large population found in the region, alongside influences from neighbouring regions and cultures,...
and Southeast Asian cuisine. Peanut oil has a high smoke point
Smoke point
The smoke point generally refers to the temperature at which a cooking fat or oil begins to break down to glycerol and free fatty acids, and produce bluish smoke. The glycerol is then further broken down to acrolein which is a component of the smoke. It is the presence of the acrolein that causes...
relative to many other cooking oils. Its major component fatty acid
Fatty acid
In chemistry, especially biochemistry, a fatty acid is a carboxylic acid with a long unbranched aliphatic tail , which is either saturated or unsaturated. Most naturally occurring fatty acids have a chain of an even number of carbon atoms, from 4 to 28. Fatty acids are usually derived from...
s are oleic acid
Oleic acid
Oleic acid is a monounsaturated omega-9 fatty acid found in various animal and vegetable fats. It has the formula CH37CH=CH7COOH. It is an odorless, colourless oil, although commercial samples may be yellowish. The trans isomer of oleic acid is called elaidic acid...
(46.8% as olein), linoleic acid
Linoleic acid
Linoleic acid is an unsaturated n-6 fatty acid. It is a colorless liquid at room temperature. In physiological literature, it has a lipid number of 18:2...
(33.4% as linolein), and palmitic acid
Palmitic acid
Palmitic acid, or hexadecanoic acid in IUPAC nomenclature, is one of the most common saturated fatty acids found in animals and plants. Its molecular formula is CH314CO2H. As its name indicates, it is a major component of the oil from palm trees . Palmitate is a term for the salts and esters of...
(10.0% as palmitin). The oil also contains some stearic acid
Stearic acid
Stearic acid is the saturated fatty acid with an 18 carbon chain and has the IUPAC name octadecanoic acid. It is a waxy solid, and its chemical formula is CH316CO2H. Its name comes from the Greek word στέαρ "stéatos", which means tallow. The salts and esters of stearic acid are called stearates...
, arachidic acid
Arachidic acid
Arachidic acid, also called eicosanoic acid, is the saturated fatty acid with a 20 carbon chain. It is as a minor constituent of peanut oil and corn oil . Its name derives from the Latin arachis — peanut...
, arachidonic acid
Arachidonic acid
Arachidonic acid is a polyunsaturated omega-6 fatty acid 20:4.It is the counterpart to the saturated arachidic acid found in peanut oil, Arachidonic acid (AA, sometimes ARA) is a polyunsaturated omega-6 fatty acid 20:4(ω-6).It is the counterpart to the saturated arachidic acid found in peanut oil,...
, behenic acid
Behenic acid
Behenic acid is a normal carboxylic acid, the saturated fatty acid with formula C21H43COOH. In appearance, it consists of white to cream color crystals or powder with a melting point of 80°C and boiling point of 306°C.-Sources:...
, lignoceric acid
Lignoceric acid
Lignoceric acid, or tetracosanoic acid, is the saturated fatty acid with formula C23H47COOH. It is found in wood tar, various cerebrosides, and in small amounts in most natural fats. The fatty acids of peanut oil contain small amounts of lignoceric acid . This fatty acid is also a byproduct of...
and other fatty acids.

At the 1900 Paris Exhibition
Exposition Universelle (1900)
The Exposition Universelle of 1900 was a world's fair held in Paris, France, from April 15 to November 12, 1900, to celebrate the achievements of the past century and to accelerate development into the next...
, the Otto Company
Deutz AG
Deutz AG is an engine manufacturer, based in Cologne, Germany.-History:The company was founded by Nikolaus Otto, inventor of the four-stroke internal combustion engine, in 1864 as N. A...
, at the request of the French government
Government of France
The government of the French Republic is a semi-presidential system determined by the French Constitution of the fifth Republic. The nation declares itself to be an "indivisible, secular, democratic, and social Republic"...
, demonstrated that peanut oil could be used as a source of fuel for the diesel engine
Diesel engine
A diesel engine is an internal combustion engine that uses the heat of compression to initiate ignition to burn the fuel, which is injected into the combustion chamber...
; this was one of the earliest demonstrations of biodiesel
Biodiesel
Biodiesel refers to a vegetable oil- or animal fat-based diesel fuel consisting of long-chain alkyl esters. Biodiesel is typically made by chemically reacting lipids with an alcohol....
technology.

It is also used as the main ingredient in some earwax
Earwax
Earwax, also known by the medical term cerumen, is a yellowish waxy substance secreted in the ear canal of humans and other mammals. It protects the skin of the human ear canal, assists in cleaning and lubrication, and also provides some protection from bacteria, fungi, insects and water...
removing products along with almond oil. Peanut oil is also used as a fecal softener.

Peanut oil can also be used to make soap in a process called saponification
Saponification
Saponification is a process that produces soap, usually from fats and lye. In technical terms, saponification involves base hydrolysis of triglycerides, which are esters of fatty acids, to form the sodium salt of a carboxylate. In addition to soap, such traditional saponification processes...
. The soap produced is soft and stable.
According to the USDA data upon which the following table is based, 100 g of peanut oil contains 17.7 g of saturated fat, 48.3 g of monounsaturated fat, and 33.4 g of polyunsaturated fat.
The source of this article is wikipedia, the free encyclopedia.  The text of this article is licensed under the GFDL.