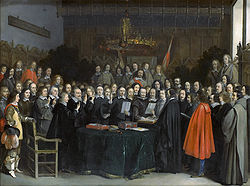 The Peace of Münster was a treaty
Treaty
A treaty is an express agreement under international law entered into by actors in international law, namely sovereign states and international organizations. A treaty may also be known as an agreement, protocol, covenant, convention or exchange of letters, among other terms...
between the Dutch Republic
Dutch Republic
The Dutch Republic — officially known as the Republic of the Seven United Netherlands , the Republic of the United Netherlands, or the Republic of the Seven United Provinces — was a republic in Europe existing from 1581 to 1795, preceding the Batavian Republic and ultimately...
and Spain
Spain
Spain , officially the Kingdom of Spain languages]] under the European Charter for Regional or Minority Languages. In each of these, Spain's official name is as follows:;;;;;;), is a country and member state of the European Union located in southwestern Europe on the Iberian Peninsula...
signed in 1648. It was a landmark treaty for the Dutch republic and one of the key events in Dutch history; with it, the United Netherlands finally became independent from the Spanish Crown
Spanish Empire
The Spanish Empire comprised territories and colonies administered directly by Spain in Europe, in America, Africa, Asia and Oceania. It originated during the Age of Exploration and was therefore one of the first global empires. At the time of Habsburgs, Spain reached the peak of its world power....
. The treaty was a part of the Peace of Westphalia
Peace of Westphalia
The Peace of Westphalia was a series of peace treaties signed between May and October of 1648 in Osnabrück and Münster. These treaties ended the Thirty Years' War in the Holy Roman Empire, and the Eighty Years' War between Spain and the Dutch Republic, with Spain formally recognizing the...
which ended both the Thirty Years' War
Thirty Years' War
The Thirty Years' War was fought primarily in what is now Germany, and at various points involved most countries in Europe. It was one of the most destructive conflicts in European history....
and the Eighty Years' War.

The Dutch Revolt, or Eighty Years' War (1566–1648), was the revolt of the Seven United Provinces of the Netherlands against the Spanish (Habsburg
Habsburg
The House of Habsburg , also found as Hapsburg, and also known as House of Austria is one of the most important royal houses of Europe and is best known for being an origin of all of the formally elected Holy Roman Emperors between 1438 and 1740, as well as rulers of the Austrian Empire and...
) Empire.

Spain was initially successful in suppressing the rebellion. In 1572, however, the rebels conquered Brielle
Brielle
Brielle , also called Den Briel is a town and municipality in the western Netherlands, in the province of South Holland, on the north side of the island of Voorne-Putten, at the mouth of the New Maas. The municipality covers an area of 31.12 km² of which 3.63 km² is water...
, and the rebellion resurged. During the revolt the Northern Netherlands became de facto
De facto
De facto is a Latin expression that means "concerning fact." In law, it often means "in practice but not necessarily ordained by law" or "in practice or actuality, but not officially established." It is commonly used in contrast to de jure when referring to matters of law, governance, or...
independent and rapidly grew to become a world power through their merchant shipping and experienced a period of economic, scientific, and cultural growth. However at the same time the Southern Netherlands
Southern Netherlands
Southern Netherlands were a part of the Low Countries controlled by Spain , Austria and annexed by France...
(situated in modern-day Belgium
Belgium
Belgium , officially the Kingdom of Belgium, is a federal state in Western Europe. It is a founding member of the European Union and hosts the EU's headquarters, and those of several other major international organisations such as NATO.Belgium is also a member of, or affiliated to, many...
, Luxembourg
Luxembourg
Luxembourg , officially the Grand Duchy of Luxembourg , is a landlocked country in western Europe, bordered by Belgium, France, and Germany. It has two principal regions: the Oesling in the North as part of the Ardennes massif, and the Gutland in the south...
and Northern France
France
The French Republic , The French Republic , The French Republic , (commonly known as France , is a unitary semi-presidential republic in Western Europe with several overseas territories and islands located on other continents and in the Indian, Pacific, and Atlantic oceans. Metropolitan France...
) remained under Spanish rule. Despite various attempts the Dutch never managed to expel the Spanish. In the final years of the war the French allied themselves with the Dutch and they attacked the weakened Spanish in the rear. By 1648 large areas of the Southern Netherlands had been lost to France and despite many military successes Andries Bicker
Andries Bicker
Andries Bicker was a wealthy merchant on Moscovia, a member of the vroedschap, the leader of the Arminians, an administrator of the VOC, representative of the States-General of the Netherlands and colonel in the Civic guard...
, Cornelis de Graeff
Cornelis de Graeff
Cornelis de Graeff, also Cornelis de Graeff van Polsbroek was the most illustrious member of the De Graeff family. He was a mayor of Amsterdam from the Dutch Golden Age and a powerful Amsterdam regent after the sudden death of stadholder William II of Orange...
and many others wanted to sue for peace.

The negotiations between the fighting parties began in 1641 in the towns of Münster
Münster
Münster is an independent city in North Rhine-Westphalia, Germany. It is located in the northern part of the state and is considered to be the cultural centre of the Westphalia region. It is also capital of the local government region Münsterland...
and Osnabrück
Osnabrück
Osnabrück is a city in Lower Saxony, Germany, some 80 km NNE of Dortmund, 45 km NE of Münster, and some 100 km due west of Hanover. It lies in a valley penned between the Wiehen Hills and the northern tip of the Teutoburg Forest...
, in present-day Germany.

Despite not formally being recognised as an independent state, the Dutch republic was allowed to participate in the peace talks; even Spain did not oppose this. In January 1646, eight Dutch representatives (two from Holland and one from each of the other six provinces) arrived in Münster to start the negotiations. The Spanish envoys had been given great authority by the Spanish King Philip IV
Philip IV of Spain
Philip IV was King of Spain between 1621 and 1665, sovereign of the Spanish Netherlands, and King of Portugal until 1640...
who had been suing for peace for years. On 30 January 1648, the parties reached an agreement and a text was sent to The Hague and Madrid to be signed. On 15 May the same year peace was made. With the peace, the Netherlands was recognized as an independent country.