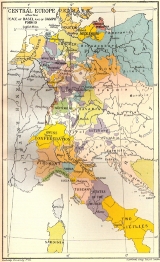 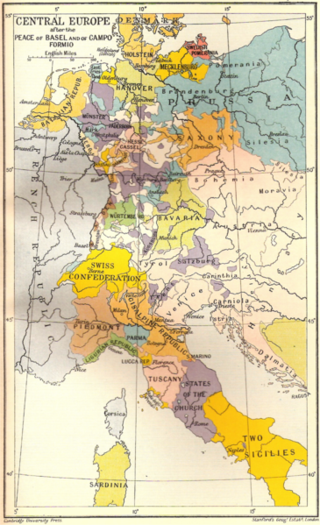 The Peace of Basel
Basel
Basel or Basle In the national languages of Switzerland the city is also known as Bâle , Basilea and Basilea is Switzerland's third most populous city with about 166,000 inhabitants. Located where the Swiss, French and German borders meet, Basel also has suburbs in France and Germany...
of 1795 consists of three peace treaties involving France
France
The French Republic , The French Republic , The French Republic , (commonly known as France , is a unitary semi-presidential republic in Western Europe with several overseas territories and islands located on other continents and in the Indian, Pacific, and Atlantic oceans. Metropolitan France...
(represented by François de Barthélemy).

The effect was the emergence of revolutionary France as a major European power.

The 5 April 1795 agreement between France had been under discussion since 1794. Prussia withdrew from the coalition that was working on the impending partition of Poland, and where appropriate, withdrew troops against Austria and Russia that were at their disposal. (see also the French Revolutionary Wars
French Revolutionary Wars
The French Revolutionary Wars were a series of major conflicts, from 1792 until 1802, fought between the French Revolutionary government and several European states...
and the Napoleonic Wars
Napoleonic Wars
The Napoleonic Wars were a series of wars declared against Napoleon's French Empire by opposing coalitions that ran from 1803 to 1815. As a continuation of the wars sparked by the French Revolution of 1789, they revolutionised European armies and played out on an unprecedented scale, mainly due to...
) In secret Prussia recognized French control of the west bank of Rhine, pending a cession by the Imperial Diet
Imperial Diet
Imperial Diet means the highest representative assembly in an empire, notably:* the historic institution of the Imperial Diet , either the estates in the Holy Roman Empire...
, while France returned all of the lands east of the Rhine captured during the war. On the night of the 6th April the document was signed by the representatives of France and Prussia, François de Barthélemy and Karl August von Hardenberg. They were not face to face, each was in his own accommodation in Rosshof or the Markgräflerhof, and the papers were passed around by a courier. The contract that gave left bank of was in a secret article, along with the promise that it would indemnify the right bank, if the left bank of the Rhine should be covered in a final general peace in France. Peter Ochs was the writer he served as a mediator for a significant proportion of these financial statements.

In the second 1795 Treaty of Basel (22 July) Spain ceded the eastern two-thirds of the island of Hispaniola
Hispaniola
Hispaniola is a major island in the Caribbean, containing the two sovereign states of the Dominican Republic and Haiti. The island is located between the islands of Cuba to the west and Puerto Rico to the east, within the hurricane belt...
to France. The French also came at night to sign the peace treaty between France and Spain, where Spain was represented by Domingo d'Yriarte . This time it was done in the mansion of Peter Ochs
Peter Ochs
Peter W. Ochs is the Edgar M. Bronfman Professor of Modern Judaic Studies at the University of Virginia, where he has served since 1997. He is an influential thinker whose interests include Jewish philosophy and theology, modern and postmodern philosophic theology, pragmatism, and semiotics...
, the Holsteinerhof.

After these treaties with Prussia and Spain that only left two main opponents of the French Republic from the 1st Coalition war.

On 28 August 1795 the third part of the three part Treaty of Basil was finally made. This was a peace between France and Hessen-Kassel; it was done by Friedrich Sigismund Waitz von Eschen.

Marie Thérèse Charlotte de Bourbon, daughter of the French king was there during the peace negotiations in Basel in 1793. There was also an agreement to exchange the Austrian troops that had been captured in Belgium.