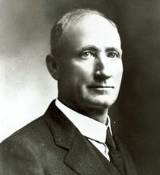 Encyclopedia
Pattillo Higgins was a businessman as well as a self-taught geologist
Geologist
A geologist is a scientist who studies the solid and liquid matter that constitutes the Earth as well as the processes and history that has shaped it. Geologists usually engage in studying geology. Geologists, studying more of an applied science than a theoretical one, must approach Geology using...
. He earned the nickname the "Prophet of Spindletop" for his endeavors in the oil
Oil
An oil is any substance that is liquid at ambient temperatures and does not mix with water but may mix with other oils and organic solvents. This general definition includes vegetable oils, volatile essential oils, petrochemical oils, and synthetic oils....
business, which accrued a fortune for many. He partnered to form the Gladys City Oil Gas and Manufacturing Company and later, established the Higgins Standard Oil Company.

Higgins ventured into real estate at first, and with the money that he saved as a logger, he started the Higgins Manufacturing Company to manufacture bricks. The business sparked his interest in oil and gas
Natural gas
Natural gas is a naturally occurring gas mixture consisting primarily of methane, typically with 0–20% higher hydrocarbons . It is found associated with other hydrocarbon fuel, in coal beds, as methane clathrates, and is an important fuel source and a major feedstock for fertilizers.Most natural...
, as he used it for his kiln
Kiln
A kiln is a thermally insulated chamber, or oven, in which a controlled temperature regime is produced. Uses include the hardening, burning or drying of materials...
s to burn the bricks evenly. He decided to travel to Pennsylvania
Pennsylvania
The Commonwealth of Pennsylvania is a U.S. state that is located in the Northeastern and Mid-Atlantic regions of the United States. The state borders Delaware and Maryland to the south, West Virginia to the southwest, Ohio to the west, New York and Ontario, Canada, to the north, and New Jersey to...
to learn about these fuels and study the geographical features that give signs to the presence of underground oil. Studying geology
Geology
Geology is the science comprising the study of solid Earth, the rocks of which it is composed, and the processes by which it evolves. Geology gives insight into the history of the Earth, as it provides the primary evidence for plate tectonics, the evolutionary history of life, and past climates...
on his own, he dedicated himself to finding these clues by reading all the United States Geological Survey
United States Geological Survey
The United States Geological Survey is a scientific agency of the United States government. The scientists of the USGS study the landscape of the United States, its natural resources, and the natural hazards that threaten it. The organization has four major science disciplines, concerning biology,...
reports and books that he could find. The details he learned reminded him of what some Beaumont locals back home referred to as "Sour Hill Mound", a place where he frequently brought his Sunday school students for outings. This mound was described as "sour" due to the unpleasant sulfur
Sulfur
Sulfur or sulphur is the chemical element with atomic number 16. In the periodic table it is represented by the symbol S. It is an abundant, multivalent non-metal. Under normal conditions, sulfur atoms form cyclic octatomic molecules with chemical formula S8. Elemental sulfur is a bright yellow...
smell that came out of the springs
Spring (hydrosphere)
A spring—also known as a rising or resurgence—is a component of the hydrosphere. Specifically, it is any natural situation where water flows to the surface of the earth from underground...
around it. Convinced that this salt dome
Salt dome
A salt dome is a type of structural dome formed when a thick bed of evaporite minerals found at depth intrudes vertically into surrounding rock strata, forming a diapir....
mound had oil below it, Higgins first partnered with George O'Brien, George Carroll, Emma John, and J.F. Lanier to form the Gladys City Oil, Gas, and Manufacturing Company in 1892. It was during this time that other formally trained geologists dismissed the idea of finding oil along the gulf coast region of the United States. Higgins' personal integrity was even challenged by the local newspaper. However, his informal training in geology influenced his belief that the Spindletop
Spindletop
Spindletop is a salt dome oil field located in the southern portion of Beaumont, Texas in the United States. The Spindletop dome was derived from the Louann Salt evaporite layer of the Jurassic geologic period. On January 10, 1901, a well at Spindletop struck oil . The new oil field soon produced...
field contained oil below due to the presence of mineral water
Mineral water
Mineral water is water containing minerals or other dissolved substances that alter its taste or give it therapeutic value, generally obtained from a naturally occurring mineral spring or source. Dissolved substances in the water may include various salts and sulfur compounds...
and gas seepage, and he managed to convince the partners to proceed with the venture. Work began the following year, but all three of the shallow drilling attempts failed to locate oil due to the shifting sands and unstable clay under the hill. Higgins held onto his ownership and leases of land over the salt dome, but resigned from the company.

Unwilling to give up hope of striking oil, Higgins placed numerous ads in industrial magazines and trade journals in an effort to spark others' interests in the prospect of hitting a successful well at the site. Only one man responded to the ads, a Croatian-American named Anthony Francis Lucas
Anthony Francis Lucas
Anthony Francis Lucas was a Croatian-born oil explorer. With Pattillo Higgins he organized the drilling of an oil well near Beaumont, Texas that became known as Spindletop...
. Lucas signed agreements with the Gladys City Company and also with Higgins in 1899, and in June of the following year, he began to drill. The first well Lucas made with his light equipment collapsed after reaching 575 feet (175.3 m). This failure exhausted the partners' finances, so Lucas turned to John H. Galey and James M. Guffey in Pittsburgh
Pittsburgh, Pennsylvania
Pittsburgh is the second-largest city in the US Commonwealth of Pennsylvania and the county seat of Allegheny County. Regionally, it anchors the largest urban area of Appalachia and the Ohio River Valley, and nationally, it is the 22nd-largest urban area in the United States...
for backing. The terms set forth by Guffey (who held and controlled the funds) limited Lucas’ percentage cut to a small amount, and eliminated Higgins cut completely from the deal.


The Lucas Gusher at Spindletop 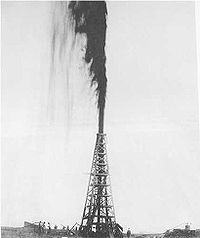 In late October 1900, with the help of the experienced crew of Al and Curt Hamill from Corsicana
Corsicana, Texas
Corsicana is a city in Navarro County, Texas, United States. It is located on Interstate 45 some fifty-five miles south of downtown Dallas. The population was 24,485 at the 2000 census...
, drilling began again. This time, the drilling would be done using a newer, heavier, and more efficient rotary type bit. Over the next several months, work was difficult maintaining the drilling through the underground sands. On January 10, 1901, the six tons of four-inch (102 mm) drilling pipe began to shoot up out of the hole, sending the roughnecks fleeing for safety. The geyser shot oil over 150 feet (45.7 m) high and flowed an estimated 100000 oilbbl/d.
The well was at a depth of 1020 feet (310.9 m), and as it turns out, was at the precise location as initially predicted by Higgins. The well would not have struck oil if it had been drilled just 50 feet (15 m) to the south. The well, which was dubbed "Lucas 1", had an initial flow rate greater than all of the oil wells in the United States combined in that day. The Spindletop oilfield churned out over 3 Moilbbl the first year of operation, and over 17 Moilbbl the following year. This effectively brought an end to John D. Rockefeller
John D. Rockefeller
John Davison Rockefeller was an American oil industrialist, investor, and philanthropist. He was the founder of the Standard Oil Company, which dominated the oil industry and was the first great U.S. business trust. Rockefeller revolutionized the petroleum industry and defined the structure of...
’s world monopoly
Monopoly
A monopoly exists when a specific person or enterprise is the only supplier of a particular commodity...
.


Lawsuit against Lucas and the Gladys City Company

Higgins sued Lucas and Gladys City Oil, Gas and Manufacturing Company for royalties, using the basis that the second lease was invalid due to the fact the first lease had not yet expired when the second was enacted. After the parties settled out of court, Higgins formed the Higgins Oil and Fuel Company located at the center of Spindletop. This company was vulnerable to takeover bids due to Higgins' over-zealous land prospecting, which enabled the lumber baron and businessman John Henry Kirby
John Henry Kirby
John Henry Kirby was a businessman whose ventures made him arguably the largest lumber manufacturer in Texas and the Southern United States. In addition to serving two terms in the Texas Legislature, he would also establish the Kirby Petroleum Company...
to overtake his ownership in 1902 by purchasing his shares of the company for $3 million. Higgins maintained his leasing rights to his land, and would establish the Higgins Standard Oil Company. He later established other wells with various investors, with an eccentric habit of pulling his interests out, leaving the majority of the profits for others.

From the Prescott Evening Courier – Dec 23, 1905:
Articles of Incorporation for the "Higgins World's Oil Company"