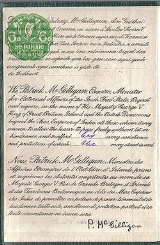 Encyclopedia
Patrick McGilligan was an Irish
Republic of Ireland
Ireland , described as the Republic of Ireland , is a sovereign state in Europe occupying approximately five-sixths of the island of the same name. Its capital is Dublin. Ireland, which had a population of 4.58 million in 2011, is a constitutional republic governed as a parliamentary democracy,...
lawyer and Cumann na nGaedheal/Fine Gael
Fine Gael
Fine Gael is a centre-right to centrist political party in the Republic of Ireland. It is the single largest party in Ireland in the Oireachtas, in local government, and in terms of Members of the European Parliament. The party has a membership of over 35,000...
politician.

McGilligan was born in Coleraine
Coleraine
Coleraine is a large town near the mouth of the River Bann in County Londonderry, Northern Ireland. It is northwest of Belfast and east of Derry, both of which are linked by major roads and railway connections...
, County Londonderry
County Londonderry
The place name Derry is an anglicisation of the old Irish Daire meaning oak-grove or oak-wood. As with the city, its name is subject to the Derry/Londonderry name dispute, with the form Derry preferred by nationalists and Londonderry preferred by unionists...
, Ireland
Ireland
Ireland is an island to the northwest of continental Europe. It is the third-largest island in Europe and the twentieth-largest island on Earth...
. He was educated at St. Columb's College
St. Columb's College
St. Columb's College is a Roman Catholic boys' grammar school in Derry, Northern Ireland and, since 2008, a specialist school in Mathematics and Computing...
, Derry
Derry
Derry or Londonderry is the second-biggest city in Northern Ireland and the fourth-biggest city on the island of Ireland. The name Derry is an anglicisation of the Irish name Doire or Doire Cholmcille meaning "oak-wood of Colmcille"...
, at Clongowes Wood in County Kildare
County Kildare
County Kildare is a county in Ireland. It is part of the Mid-East Region and is also located in the province of Leinster. It is named after the town of Kildare. Kildare County Council is the local authority for the county...
and at University College Dublin
University College Dublin
University College Dublin ) - formally known as University College Dublin - National University of Ireland, Dublin is the Republic of Ireland's largest, and Ireland's second largest, university, with over 1,300 faculty and 17,000 students...
.

He joined Sinn Féin
Sinn Féin
Sinn Féin is a left wing, Irish republican political party in Ireland. The name is Irish for "ourselves" or "we ourselves", although it is frequently mistranslated as "ourselves alone". Originating in the Sinn Féin organisation founded in 1905 by Arthur Griffith, it took its current form in 1970...
but was unsuccessful in his attempt to be elected as a MP
Member of Parliament
A Member of Parliament is a representative of the voters to a :parliament. In many countries with bicameral parliaments, the term applies specifically to members of the lower house, as upper houses often have a different title, such as senate, and thus also have different titles for its members,...
in 1918
Irish (UK) general election, 1918
The Irish general election of 1918 was that part of the 1918 United Kingdom general election that took place in Ireland. It is seen as a key moment in modern Irish history...
. McGilligan was called to the bar in 1921.


Minister for Industry and Commerce

He was elected as a Cumann na nGaedheal TD
Teachta Dála
A Teachta Dála , usually abbreviated as TD in English, is a member of Dáil Éireann, the lower house of the Oireachtas . It is the equivalent of terms such as "Member of Parliament" or "deputy" used in other states. The official translation of the term is "Deputy to the Dáil", though a more literal...
for the National University of Ireland at a by-election held on 3 November 1923. Between 1924 and 1932 McGilligan served as Minister for Industry & Commerce, notably pushing through the Shannon hydroelectric scheme, then the largest hydroelectricity
Hydroelectricity
Hydroelectricity is the term referring to electricity generated by hydropower; the production of electrical power through the use of the gravitational force of falling or flowing water. It is the most widely used form of renewable energy...
project in the world. In 1927 he set up the Electricity Supply Board
Electricity Supply Board
The Electricity Supply Board , is a semi-state electricity company in Ireland. While historically a monopoly, the ESB now operates as a commercial semi-state concern in a liberalised and competitive market...
(ESB), and also the Agricultural Credit Corporation. 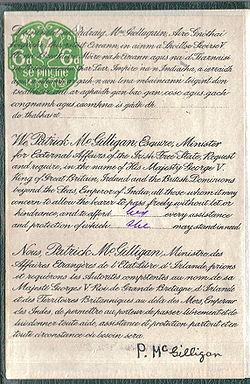 Also in 1927 McGilligan also took over the External Affairs portfolio following the assassination of Kevin O'Higgins
Kevin O'Higgins
Kevin Christopher O'Higgins was an Irish politician who served as Vice-President of the Executive Council and Minister for Justice. He was part of early nationalist Sinn Féin, before going on to become a prominent member of Cumann na nGaedheal. O'Higgins initiated the An Garda Síochána police force...
by the anti-Treaty
Anglo-Irish Treaty
The Anglo-Irish Treaty , officially called the Articles of Agreement for a Treaty Between Great Britain and Ireland, was a treaty between the Government of the United Kingdom of Great Britain and Ireland and representatives of the secessionist Irish Republic that concluded the Irish War of...
elements of the IRA
Irish Republican Army (1922–1969)
The original Irish Republican Army fought a guerrilla war against British rule in Ireland in the Irish War of Independence 1919–1921. Following the signing of the Anglo-Irish Treaty on 6 December 1921, the IRA in the 26 counties that were to become the Irish Free State split between supporters and...
, in revenge for O'Higgins' support for the execution of Republican prisoners during the Irish Civil War
Irish Civil War
The Irish Civil War was a conflict that accompanied the establishment of the Irish Free State as an entity independent from the United Kingdom within the British Empire....
(1922–23). In this position he was hugely influential at the Committee on the Operation of Dominion Legislation and at the Imperial Conference in 1930 (jointly with representatives of Australia
Australia
Australia , officially the Commonwealth of Australia, is a country in the Southern Hemisphere comprising the mainland of the Australian continent, the island of Tasmania, and numerous smaller islands in the Indian and Pacific Oceans. It is the world's sixth-largest country by total area...
, Canada
Canada
Canada is a North American country consisting of ten provinces and three territories. Located in the northern part of the continent, it extends from the Atlantic Ocean in the east to the Pacific Ocean in the west, and northward into the Arctic Ocean...
, New Zealand
New Zealand
New Zealand is an island country in the south-western Pacific Ocean comprising two main landmasses and numerous smaller islands. The country is situated some east of Australia across the Tasman Sea, and roughly south of the Pacific island nations of New Caledonia, Fiji, and Tonga...
, South Africa
South Africa
The Republic of South Africa is a country in southern Africa. Located at the southern tip of Africa, it is divided into nine provinces, with of coastline on the Atlantic and Indian oceans...
and the United Kingdom
United Kingdom
The United Kingdom of Great Britain and Northern IrelandIn the United Kingdom and Dependencies, other languages have been officially recognised as legitimate autochthonous languages under the European Charter for Regional or Minority Languages...
). The Statute of Westminster
Statute of Westminster 1931
The Statute of Westminster 1931 is an Act of the Parliament of the United Kingdom. Passed on 11 December 1931, the Act established legislative equality for the self-governing dominions of the British Empire with the United Kingdom...
that emerged from these meetings gave greater power to dominion
Dominion
A dominion, often Dominion, refers to one of a group of autonomous polities that were nominally under British sovereignty, constituting the British Empire and British Commonwealth, beginning in the latter part of the 19th century. They have included Canada, Australia, New Zealand, Newfoundland,...
s in the Commonwealth
Commonwealth of Nations
The Commonwealth of Nations, normally referred to as the Commonwealth and formerly known as the British Commonwealth, is an intergovernmental organisation of fifty-four independent member states...
like the Irish Free State
Irish Free State
The Irish Free State was the state established as a Dominion on 6 December 1922 under the Anglo-Irish Treaty, signed by the British government and Irish representatives exactly twelve months beforehand...
.

In 1948 McGilligan was appointed Minister for Finance in the first Inter-Party Government
Government of the 13th Dáil
The 13th Dáil was elected at the 1948 general election on 4 February 1948 and first met on 18 February when the 5th Government of Ireland was appointed. The 13th Dáil lasted for 1,211 days....
. As Minister he undertook some major reforms. He instigated a new approach where Government invested radically in capital projects. Colleagues however complained of his frequent absence from the Cabinet table and the difficulty of contacting him at the Department of Finance Between 1954 and 1957 he served as Attorney General
Attorney General of Ireland
The Attorney General is a constitutional officer who is the official adviser to the Government of Ireland in matters of law. He is in effect the chief law officer in Ireland. The Attorney General is not a member of the Government but does participate in cabinet meetings when invited and attends...
, a job in which as he admitted he felt far more at home than as Minister for Finance. He retired from Dáil Éireann
Dáil Éireann
Dáil Éireann is the lower house, but principal chamber, of the Oireachtas , which also includes the President of Ireland and Seanad Éireann . It is directly elected at least once in every five years under the system of proportional representation by means of the single transferable vote...
at the 1965 general election
Irish general election, 1965
The Irish general election of 1965 was held on 7 April 1965. The newly elected members of the 18th Dáil assembled at Leinster House on 21 April when the new Taoiseach and government were appointed....
, having served for over 40 years.

Patrick McGilligan died in Dublin on 15 November 1979. A later Attorney General John M. Kelly
John M. Kelly (politician)
John Maurice Kelly was an Irish legal academic and senior Fine Gael politician.-Education:Kelly received his primary and secondary education at St Conleth's College in Dublin 4 and at the Glenstal Abbey boarding school in County Limerick, respectively.He attended University College Dublin between...
in the preface to The Irish Constitution (1980) noted the remarkable number of senior judges who were former students of McGilligan and suggested that given his own firm belief in the value of judicial review he deserves much of the credit for the remarkable development of Irish law in this field since the early 1960s.