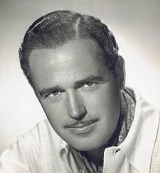 Encyclopedia
Reginald Lawrence Knowles (11 November 1911 – 23 December 1995) was an English film actor
Actor
An actor is a person who acts in a dramatic production and who works in film, television, theatre, or radio in that capacity...
who renamed himself Patric Knowles, a name which reflects his Irish
Irish people
The Irish people are an ethnic group who originate in Ireland, an island in northwestern Europe. Ireland has been populated for around 9,000 years , with the Irish people's earliest ancestors recorded having legends of being descended from groups such as the Nemedians, Fomorians, Fir Bolg, Tuatha...
descent. He appeared in films of the 1930s through the 1970s. He made his film debut in 1933, and played either first or second film leads throughout his career.

In his first American
United States
The United States of America is a federal constitutional republic comprising fifty states and a federal district...
film, Give Me Your Heart (1936), released in Great Britain
Great Britain
Great Britain or Britain is an island situated to the northwest of Continental Europe. It is the ninth largest island in the world, and the largest European island, as well as the largest of the British Isles...
as Sweet Aloes, Knowles was cast as a titled Englishman of means.

While making The Charge of the Light Brigade
The Charge of the Light Brigade (1936 film)
The Charge of the Light Brigade is a 1936 historical film made by Warner Bros. It was directed by Michael Curtiz and produced by Samuel Bischoff, with Hal B. Wallis as executive producer, from a screenplay by Michael Jacoby and Rowland Leigh, from a story by Michael Jacoby based on the poem The...
(1936) at Lone Pine, California
Lone Pine, California
Lone Pine is a census-designated place in Inyo County, California, United States. Lone Pine is located south-southeast of Independence, at an elevation of 3727 feet . The population was 2,035 at the 2010 census, up from 1,655 at the 2000 census. The town is located in the Owens Valley, near the...
, he befriended Errol Flynn
Errol Flynn
Errol Leslie Flynn was an Australian-born actor. He was known for his romantic swashbuckler roles in Hollywood films, being a legend and his flamboyant lifestyle.-Early life:...
, whose acquaintance he had made when both were under contract to Warner Bros.
Warner Bros.
Warner Bros. Entertainment, Inc., also known as Warner Bros. Pictures or simply Warner Bros. , is an American producer of film and television entertainment.One of the major film studios, it is a subsidiary of Time Warner, with its headquarters in Burbank,...
in England
England
England is a country that is part of the United Kingdom. It shares land borders with Scotland to the north and Wales to the west; the Irish Sea is to the north west, the Celtic Sea to the south west, with the North Sea to the east and the English Channel to the south separating it from continental...
. Since that film, in which Knowles played the part of Capt. Perry Vickers, the brother of Flynn's Maj. Geoffrey Vickers, he was cast more frequently as straitlaced characters alongside Flynn's flamboyant ones, notably as Will Scarlet
Will Scarlet
Will Scarlet was a prominent member of Robin Hood's Merry Men. He was present in the earliest ballads along with Little John and Much the Miller's Son....
in The Adventures of Robin Hood
The Adventures of Robin Hood (film)
The Adventures of Robin Hood is a 1938 American swashbuckler film directed by Michael Curtiz and William Keighley. Filmed in Technicolor, the picture stars Errol Flynn, Olivia de Havilland, Basil Rathbone, and Claude Rains.-Plot:...
(1938). Both actors starred as well in Four's A Crowd, also in 1938.

More than two decades after Flynn's death, biographer Charles Higham
Charles Higham (biographer)
Charles Higham is an author, editor and poet. Higham is a recipient of the Prix des Créateurs of the Académie Française and the Poetry Society of London Prize.-Biography:...
sullied Flynn's memory by accusing him of having been a fascist sympathizer and Nazi spy
SPY
SPY is a three-letter acronym that may refer to:* SPY , ticker symbol for Standard & Poor's Depositary Receipts* SPY , a satirical monthly, trademarked all-caps* SPY , airport code for San Pédro, Côte d'Ivoire...
. Knowles, who had served in World War II
World War II
World War II, or the Second World War , was a global conflict lasting from 1939 to 1945, involving most of the world's nations—including all of the great powers—eventually forming two opposing military alliances: the Allies and the Axis...
as a flying instructor in the RCAF, came to Flynn's defense, writing Rebuttal for a Friend as an epilogue
Epilogue
An epilogue, epilog or afterword is a piece of writing at the end of a work of literature or drama, usually used to bring closure to the work...
to Tony Thomas' Errol Flynn: The Spy Who Never Was (Citadel Press, 1990) ISBN 080651180X.

Knowles was a freelance film actor from 1939 until his last film appearance in 1973. In the 1940s, he was known for playing protagonists in a number of horror films, including The Wolf Man (1941) and Frankenstein Meets the Wolfman (1943).

Knowles was also cast as comic foils in a number of comedies such as Abbott and Costello
Abbott and Costello
William "Bud" Abbott and Lou Costello performed together as Abbott and Costello, an American comedy duo whose work on stage, radio, film and television made them the most popular comedy team during the 1940s and 1950s...
's Who Done It? (1942) and Hit The Ice
Hit the Ice (film)
Hit the Ice is a 1943 film starring the comedy team of Abbott and Costello and directed by Charles Lamont, who took over after the original director, Erle C. Kenton, was fired.-Plot:...
(1943). He also appeared opposite Jack Kelly
Jack Kelly (actor)
Jack Kelly was an American film and television actor most noted for the role of "Bart Maverick" in the TV series Maverick, which ran on ABC from 1957 to 1962...
in a 1957 episode of the television series Maverick
Maverick (TV series)
Maverick is a western television series with comedic overtones created by Roy Huggins. The show ran from September 22, 1957 to July 8, 1962 on ABC and stars James Garner as Bret Maverick, a cagey, articulate cardsharp. Eight episodes into the first season, he was joined by Jack Kelly as his brother...
called "The Wrecker", which was based on a Robert Louis Stevenson
Robert Louis Stevenson
Robert Louis Balfour Stevenson was a Scottish novelist, poet, essayist and travel writer. His best-known books include Treasure Island, Kidnapped, and Strange Case of Dr Jekyll and Mr Hyde....
adventure and co-starred James Garner
James Garner
James Garner is an American film and television actor, one of the first Hollywood actors to excel in both media. He has starred in several television series spanning a career of more than five decades...
.

Knowles was inducted into the Hollywood Walk of Fame and wrote a novel called Even Steven (Vantage Press, 1960) ASIN
Asín
Asín is a municipality located in the Cinco Villas comarca of the province of Zaragoza, Aragon, Spain, located a few kilometers west of Orés. According to the 2004 census , the municipality has a population of 106 inhabitants....
B0006RMC2G. He was cremated. His ashes were either given to a friend or family.