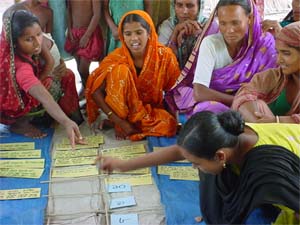 The roots of PRA techniques can be traced to the activist adult education methods of Paulo Freire
Paulo Freire
Paulo Reglus Neves Freire was a Brazilian educator and influential theorist of critical pedagogy.-Biography:...
and the study clubs of the Antigonish Movement
Antigonish Movement
The Antigonish Movement blended adult education, co-operatives, microfinance and rural community development to help small, resource-based communities around Canada’s Maritimes improve their economic and social circumstances. A group of priests and educators, including Father Jimmy Tompkins, Father...
. In this view, an actively involved and empowered local population is essential to successful rural community development. Robert Chambers
Robert Chambers (development scholar)
- His approach:Since the 1980s, he has been one of the leading advocates for putting the poor, destitute and marginalised at the centre of the processes of development policy. In particular he argues they should be taken into account when the development problem is identified, policy formulated and...
, a key exponent of PRA, argues that the approach owes much to "the Freirian theme, that poor and exploited people can and should be enabled to analyze their own reality."

By the early 1980s, there was growing dissatisfaction among development experts with both the reductionism of formal surveys, and the biases of typical field visits. In 1983, Robert Chambers, a Fellow at the Institute of Development Studies (UK), used the term Rapid Rural Appraisal to describe techniques that could bring about a 'reversal of learning' . Two years later, the first international conference to share experiences relating to RRA was held in Thailand . This was followed by a rapid growth in the development of methods that involved rural people in examining their own problems, setting their own goals, and monitoring their own achievements. By the mid 1990’s, the term RRA had been replaced by a number of other terms including ‘Participatory Rural Appraisal (PRA)’ and ‘Participatory Learning and Action’ (PLA).

Hundreds of participatory techniques and tools have been described in a variety of books and newsletters, or taught at training courses around the world. These techniques can be divided into four categories:

To ensure that people are not excluded from participation, these techniques avoid writing
Writing
Writing is the representation of language in a textual medium through the use of a set of signs or symbols . It is distinguished from illustration, such as cave drawing and painting, and non-symbolic preservation of language via non-textual media, such as magnetic tape audio.Writing most likely...
wherever possible, relying instead on the tools of oral communication
Orality
Orality is thought and verbal expression in societies where the technologies of literacy are unfamiliar to most of the population. The study of orality is closely allied to the study of oral tradition...
like pictures, symbols, physical objects and group memory. Efforts are made in many projects, however, to build a bridge to formal literacy
Literacy
Literacy has traditionally been described as the ability to read for knowledge, write coherently and think critically about printed material.Literacy represents the lifelong, intellectual process of gaining meaning from print...
; for example by teaching people how to sign their names or recognize their signatures.


A 'new professionalism' for development

A key idea that has accompanied the development of PRA techniques is that of a new professionalism. Robert Chambers
Robert Chambers (development scholar)
- His approach:Since the 1980s, he has been one of the leading advocates for putting the poor, destitute and marginalised at the centre of the processes of development policy. In particular he argues they should be taken into account when the development problem is identified, policy formulated and...
has explained this as follows:

“The central thrusts of the [new] paradigm … are decentralization and empowerment. Decentralization means that resources and discretion are devolved, turning back the inward and upward flows of resources and people. Empowerment means that people, especially poorer people, are enabled to take more control over their lives, and secure a better livelihood with ownership and control of productive assets as one key element. Decentralization and empowerment enable local people to exploit the diverse complexities of their own conditions, and to adapt to rapid change”.

To be an external agent of change within this discipline implies two-way learning. Development agents learn to both appreciate and lever the power of oral culture and the transformations that are possible within it. Walter J. Ong
Walter J. Ong
Father Walter Jackson Ong, Ph.D. , was an American Jesuit priest, professor of English literature, cultural and religious historian and philosopher. His major interest was in exploring how the transition from orality to literacy influenced culture and changed human consciousness...
has argued that “many of the contrasts often made between ‘western’ and other views seem reducible to contrasts between deeply interiorized literacy and more or less residually oral states of consciousness.”


The limits of PRA

There are those who see limits to PRA. This is on a range of grounds - for example that it doesn't work, that it reveals the secrets of rural communities to be managed by development agencies, or that it is a tool of cooptation into neo-liberal development agendas. These were summarized in Participation: The New Tyranny?