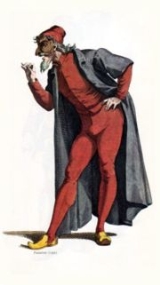 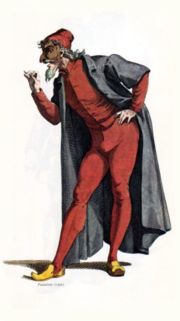 Pantalone, or Pantalone del bisognosi, Italian for 'Pantalone of the needy', is one of the most important principal characters found in commedia del arte. With his exceptional greed and status at the top of the social order, Pantalone is "money" in the commedia world.

Commedia productions date back to Italy around the year 1560, making the origin for Pantalone's character quite difficult to determine. The most common explanation for the name "Pantalone" comes from the Italian phrase pianta leone, translated as "plant the lion." The lion may, in fact, refer to the emblem of the Republic of Venice
Republic of Venice
The Republic of Venice or Venetian Republic was a state originating from the city of Venice in Northeastern Italy. It existed for over a millennium, from the late 7th century until 1797. It was formally known as the Most Serene Republic of Venice and is often referred to as La Serenissima, in...
, and Venice's conquests around the globe where Venetians had literally "planted the lion" flag. Pantalone's character is always a Venetian old man, "a rich and almost miserly old merchant, always decrepit and stumbling." Pantalone is thought to be greatly based on the old Venetian merchants of the time, known for their stingy and less-than-pleasant personalities.

The character of Pantalone is entirely based on money and ego, for he has the highest regards for his intelligence, "but at every step he becomes the butt for every conceivable kind of trick". With little else to occupy his thoughts after a life as a tradesman or merchant, Pantalone is the metaphoric representation of money in the commedia world. Pantalone is usually the father to one of the lovers, another stock character found in commedia. He is driven to keep his child and their respective lover apart. Pantalone is presented either as a widower or bachelor, and despite his age, makes numerous passes at the women within the commedia world, "though he is always rejected". Pantalone never forgets a deal and his merit is based on actions, not words.

Despite his sinister and often inhumane treatment towards his fellows, Pantalone is perceived to be a pivotal part of commedia. His importance is represented in almost every commedia production; often placing him at the beginning of the comedy. In a commedia comedy, many zanni
Zanni
Zanni or Zani is a character type of Commedia dell'arte best known as an astute servant and trickster. The Zanni comes from the countryside. The Zanni is known to be a “dispossessed immigrant worker”. "Immigrant" in Italy at the time of the city-states, did not necessarily mean someone from...
or lazzi
Lazzi
Lazzi is an improvised comic dialogue or action commonly used in the Commedia dell'arte. Most English-speaking troupes use the Italian plural "lazzi" as the singular and "lazzis" for the plural....
routines will begin by an action delivered by Pantalone himself.

The traditional Pantalone stance is that of a hunch-backed old man. While it would generally be assumed the hunch-backed position may be one of an elderly old man, it is really for the protection of his money bag that generates his apparent frailty. He walks with his hips forward, allowing him to make larger strides when he walks. He often falls backwards, generally to bad news related in some way or another to his financials. When this occurs, he is often amusingly "beetle-like" and is often stuck in that position until assisted. None of Pantalone's physical actions should look easy, for his is truly "the oldest of the old".

Pantalone's character has transcended through the decades; "were we to seek his present-day counterpart we should not be far wrong in thinking of a middle-aged businessman, wealthy and well esteemed, apt at times to dally with ladies full of doubtful virtue, at other times as apt to show himself the devoted father anxious to protect a young son or puzzled by the actions of a daughter he does not understand". Parts of his character, from the overprotective father to the greedy man concerned with nothing but his wealth, are traits familiar to today's pop-culture world. For example, the school principal in the film Sixteen Candles
Sixteen Candles
Sixteen Candles is a 1984 American film starring Molly Ringwald, Michael Schoeffling and Anthony Michael Hall. It was written and directed by John Hughes.- Plot :...
(1984) is an interpretation of the Pantalone character, for his goal is to keep the two main characters from being together and to maintain some type of control of his school. He is the bitter old man determined to keep his students from having any kind of fun. On the television show The Simpsons
The Simpsons
The Simpsons is an American animated sitcom created by Matt Groening for the Fox Broadcasting Company. The series is a satirical parody of a middle class American lifestyle epitomized by its family of the same name, which consists of Homer, Marge, Bart, Lisa and Maggie...
, Mr. Burns, owner of the Springfield Nuclear Power Plant and the richest citizen of Springfield, is perhaps the epitome of the Pantalone character. He is greedy, stingy, and occasionally downright mean.

Pantalone is one of the most complex characters found in commedia dell'arte and is arguably the most important character in any commedia production. Commedia would not have the true commedia-essence without the eternally bitter Pantalone, driven to protect and control the money and keep the lovers apart. He is a true nod to the development of Italian comedy, providing humor, absurdity, and even some pity from audiences who frequent the commedia-scene.