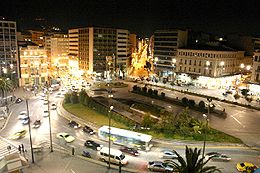 Omonoia Square is a central square in Athens
Athens
Athens , is the capital and largest city of Greece. Athens dominates the Attica region and is one of the world's oldest cities, as its recorded history spans around 3,400 years. Classical Athens was a powerful city-state...
. It marks the northern corner of the downtown area defined by the city plans of the 19th century, and is one of the city's principal traffic hubs. It is served by a Omonia train station
Omonoia station
Omonoia station is a subway station in Omonoia square of Athens used by Attiko Metro and ISAP.The first station opened 1895 but had been completely redesigned until 1930 as a Metro station. In 2000 the additional platforms for Line 2 was opened....
, used by the Athens Metro
Athens Metro
The Athens Metro is an underground rapid transit system serving Athens, the capital city of Greece. It was constructed and owned by Attiko Metro S.A. and operated until 2011 by Attiko Metro Etaireia Leitourgias S.A....
and the Ilektrikos.

The circle accesses 3 Septemvriou Street in the north (September 3, exit), Patission Street, Panepistimiou Street
Panepistimiou Street
Panepistimiou Street is a major street in Athens that runs one way for non-transit vehicles since 2002 from Amalias Avenue, Syntagma Square and Vassilissis Sofias Avenue to Omonoia Square in which is now a pedestrian crossing and before an intersection...
(entrance), Agiou Konstantinou Street in the west (formerly entrance/exit, now exit), Panagi Tsaldari Street accessing Pireos Street
Pireos Street
Peiraios Street is a main road in Athens, Greece linking the center of the city to the suburban port city of Piraeus. From downtown Athens since the 1970s, it is bypassed by Andrea Syngrou and a small highway southward, and aligns nearly to the northeast from the southwest, while aligning...
(formerly entrance/exit, now entrance), Athinas Street
Athinas Street
Athinas Street is a street in downtown Athens in Greece. It is named after Athena, the goddess of wisdom. The street runs from Ermou Street north to Omonoia Square through the Psiri neighborhood. Its total length is nearly 1 km of which 80 m is a walkway since 1999...
(entrance/exit) in the south and now a walkway, while Stadiou Street
Stadiou Street
Stadiou Street is Athens' major street linking the Omonoia and Syntagma Squares. It runs diagonally and is one-way from northwest to southeast...
(named after the ancient Stadium) in the southeast (exit) once continued the circle.

The square's traffic route from the 19th century until 1998 once more fully circumvented the centre with six streets, of which five also functioned as entrances and exits. From the 19th century to the 1950s, the area's layout more literally approached that of a square, framed by broad paths to the edges and centrally, and surrounded by neoclassical buildings. The square's focus also featured a shading arc of palm trees until the 1950s, and a central fountain until 2000, while almost a century ago, ceremonial cannon were once aligned in a central circle. The square including its trees were later and to great criticism demolished, except for the fountain, to make room for the ever-increasing traffic. The area now formed a pentagon facing northwest and greener hexagon to the northeast, with a central circle. Road areas continued to encroach on the previous design in the shape of a circle totaling four lanes, with part of the former road nevertheless transformed into a larger open pedestrian space; but to great regret half the neoclassical buildings in the western and northern areas were removed, although some neoclassical structures remain in the northern part and within Athinas Street.

Trees were later replanted within Omonoia, and encircled the fountain once again. When part of the square was shut down for renovation ahead of the Athens 2004 Summer Olympics, it was now decided to eliminate traffic from the west and east sides for good, reducing it to the westbound lanes at the southern section and the eastbound lanes at south leaving one route.

The focal space here has been argued to have existed since ancient times, later abandoned but revived when Athens became a city once more. Omonoia has always been the commercial hub of modern downtown Athens, juxtaposed to the civic center around Syntagma Square
Syntagma Square
Syntagma Square , is located in central Athens, Greece. The Square is named after the Constitution that King Otto was forced to grant the people after a popular and military uprising, on September 3, 1843....
to the east.

Sporting celebrations have recently been held here, including following Greece
Greece
Greece , officially the Hellenic Republic , and historically Hellas or the Republic of Greece in English, is a country in southeastern Europe....
's victory in the Eurobasket 2005
Eurobasket 2005
The EuroBasket 2005 was held in Serbia and Montenegro between 16 September and 25 September 2005. Greece won the gold medal by defeating Germany, while France won the bronze medal over Spain...
finals and winning the championship. Other sporting successes, such as at the Euro 2004 tournament, have also tended to be celebrated here.

On Omonoia Square two former hotels designed by the German-Greek architect Ernst Ziller
Ernst Ziller
Ernst Moritz Theodor Ziller was a Saxon architect who later became a Greek national, and in the late 19th and early 20th centuries was a major designer of royal and municipal buildings in Athens, Patras and other Greek cities.- Buildings :* Presidential Mansion, Athens* National Theatre of...
in the late 1870s stand ; the "Bagkeion" and the "Megas Alexandros".
The source of this article is wikipedia, the free encyclopedia.  The text of this article is licensed under the GFDL.