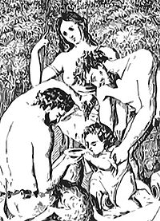 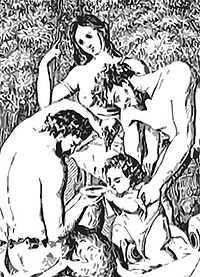 In Greek mythology
Greek mythology
Greek mythology is the body of myths and legends belonging to the ancient Greeks, concerning their gods and heroes, the nature of the world, and the origins and significance of their own cult and ritual practices. They were a part of religion in ancient Greece...
, Panacea (Greek Πανάκεια, Panakeia) was a goddess of healing. She was the daughter of Asclepius
Asclepius
Asclepius is the God of Medicine and Healing in ancient Greek religion. Asclepius represents the healing aspect of the medical arts; his daughters are Hygieia , Iaso , Aceso , Aglæa/Ægle , and Panacea...
and Epione
Epione
In Greek mythology, Epione was the goddess of soothing of pain; in fact, her name actually means soothing. She was the wife of Asclepius and mother of Panacea, the goddess of medicines, and Hygieia, the goddess of health. She was probably also the mother of the famous physicians Machaon and...
. Panacea and her five sisters each performed a facet of Apollo
Apollo
Apollo is one of the most important and complex of the Olympian deities in Greek and Roman mythology...
's art: Panacea was the goddess of cure
Cure
A cure is a completely effective treatment for a disease.The Cure is an English rock band.Cure, or similar, may also refer to:-Film and television:* The Cure , a short film starring Charlie Chaplin...
s, Iaso
Iaso
Iaso or Ieso was the Greek goddess of recuperation from illness. The daughter of Asclepius, she had five sisters: Aceso, Aglæa/Ægle, Hygieia, Panacea, and Meditrina . All six were associated with some aspect of health or healing.-Description:...
was the goddess of recuperation
Recuperation
Recuperation, in common usage, refers to a period of recovery. This has many uses, from medicine, in which sense it refers to the process by which medical patients recover from disease, injury, or mental illness, or finance, where it refers to the financial recovery of an individual or company....
, Hygieia
Hygieia
In Greek and Roman mythology, Hygieia , was a daughter of the god of medicine, Asclepius. She was the goddess/personification of health , cleanliness and sanitation. She also played an important part in her father's cult...
was the goddess of disease prevention, Aceso
Aceso
Aceso was the Greek goddess of the healing process. She was the daughter of Asclepius and Epione, sister of Iaso, Hygieia, Panacea, and Aegle....
was the goddess of recovery
Healing
Physiological healing is the restoration of damaged living tissue, organs and biological system to normal function. It is the process by which the cells in the body regenerate and repair to reduce the size of a damaged or necrotic area....
, and Aglaea was the goddess of natural beauty.

Panacea also had four brothers – Podaleirus
Podalirius
In Greek mythology, Podalirius or Podalarius was a son of Asclepius. With Machaon, his brother, he led thirty ships from Thessaly in the Trojan War on the side of the Greeks. Like Machaon, he was a legendary healer. He healed Philoctetes, holder of the bow and arrows of Heracles required to end...
, one of the two kings of Tricca
Tricca
Tricca was an ancient city in Thessaly, Greece. It corresponds to modern Trikala.It was an ancient city, near the Peneius River and on the Lethaeus River. It is mentioned in Homer as the Kingdom of Machaon and Podaleirius, sons of Aesculapius and physicians of the Greek army. It possessed the...
, who had a flair for diagnostics, and Machaon
Machaon (mythology)
In Greek mythology, Machaon was a son of Asclepius. With Podalirius, his brother, he led an army from Thessaly in the Trojan War on the side of the Greeks. He, along with his brother, were highly valued surgeons and medics. In the Iliad he was wounded and put out of action by Paris...
, the other king of Tricca, who was a master surgeon
Surgeon
In medicine, a surgeon is a specialist in surgery. Surgery is a broad category of invasive medical treatment that involves the cutting of a body, whether human or animal, for a specific reason such as the removal of diseased tissue or to repair a tear or breakage...
(these two took part in the Trojan War
Trojan War
In Greek mythology, the Trojan War was waged against the city of Troy by the Achaeans after Paris of Troy took Helen from her husband Menelaus, the king of Sparta. The war is among the most important events in Greek mythology and was narrated in many works of Greek literature, including the Iliad...
until Machaon was killed by Penthesilea
Penthesilea
Penthesilea or Penthesileia was an Amazonian queen in Greek mythology, the daughter of Ares and Otrera and the sister of Hippolyta, Antiope and Melanippe...
, queen of the Amazons); Telesphoros
Telesphorus (mythology)
In Greek mythology, Telesphorus was a son of Asclepius. He frequently accompanied his sister, Hygieia. He was a dwarf whose head was always covered with a hood or cap....
, who devoted his life to serving Asclepius
Asclepius
Asclepius is the God of Medicine and Healing in ancient Greek religion. Asclepius represents the healing aspect of the medical arts; his daughters are Hygieia , Iaso , Aceso , Aglæa/Ægle , and Panacea...
; and Aratus
Aratus
Aratus was a Greek didactic poet. He is best known today for being quoted in the New Testament. His major extant work is his hexameter poem Phaenomena , the first half of which is a verse setting of a lost work of the same name by Eudoxus of Cnidus. It describes the constellations and other...
, her stepbrother, who was a Greek hero
Hero
A hero , in Greek mythology and folklore, was originally a demigod, their cult being one of the most distinctive features of ancient Greek religion...
and the patron/liberator of Sicyon
Sicyon
Sikyon was an ancient Greek city situated in the northern Peloponnesus between Corinth and Achaea on the territory of the present-day prefecture of Corinthia...
.

Panacea was said to have a poultice
Poultice
A poultice, also called cataplasm, is a soft moist mass, often heated and medicated, that is spread on cloth over the skin to treat an aching, inflamed, or painful part of the body. It can be used on wounds such as cuts...
or potion
Potion
A potion is a consumable medicine or poison.In mythology and literature, a potion is usually made by a magician, sorcerer, dragon, fairy or witch and has magical properties. It might be used to heal, bewitch or poison people...
with which she healed the sick. This brought about the concept of the panacea in medicine
Panacea (medicine)
The panacea , named after the Greek goddess of healing, Panacea, also known as panchrest, was supposed to be a remedy that would cure all diseases and prolong life indefinitely...
, a substance meant to cure all diseases. The term is also used figuratively as something intended to completely solve a large, multi-faceted problem.

A river in Thrace
Thrace
Thrace is a historical and geographic area in southeast Europe. As a geographical concept, Thrace designates a region bounded by the Balkan Mountains on the north, Rhodope Mountains and the Aegean Sea on the south, and by the Black Sea and the Sea of Marmara on the east...
/Moesia
Moesia
Moesia was an ancient region and later Roman province situated in the Balkans, along the south bank of the Danube River. It included territories of modern-day Southern Serbia , Northern Republic of Macedonia, Northern Bulgaria, Romanian Dobrudja, Southern Moldova, and Budjak .-History:In ancient...
was named after the goddess, and is still known as the river Panega (from Greek panakeia).
The source of this article is wikipedia, the free encyclopedia.  The text of this article is licensed under the GFDL.