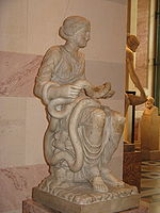 Encyclopedia
In Greek
Greek mythology
Greek mythology is the body of myths and legends belonging to the ancient Greeks, concerning their gods and heroes, the nature of the world, and the origins and significance of their own cult and ritual practices. They were a part of religion in ancient Greece...
and Roman mythology
Roman mythology
Roman mythology is the body of traditional stories pertaining to ancient Rome's legendary origins and religious system, as represented in the literature and visual arts of the Romans...
, Hygieia (also Hygiea or Hygeia, Greek or , Latin Hygēa or Hygīa), was a daughter of the god of medicine, Asclepius
Asclepius
Asclepius is the God of Medicine and Healing in ancient Greek religion. Asclepius represents the healing aspect of the medical arts; his daughters are Hygieia , Iaso , Aceso , Aglæa/Ægle , and Panacea...
. She was the goddess/personification of health (Greek
Greek language
Greek is an independent branch of the Indo-European family of languages. Native to the southern Balkans, it has the longest documented history of any Indo-European language, spanning 34 centuries of written records. Its writing system has been the Greek alphabet for the majority of its history;...
: ὑγίεια - hugieia), cleanliness and sanitation. She also played an important part in her father's cult
Cult (religious practice)
In traditional usage, the cult of a religion, quite apart from its sacred writings , its theology or myths, or the personal faith of its believers, is the totality of external religious practice and observance, the neglect of which is the definition of impiety. Cult in this primary sense is...
. While her father was more directly associated with healing, she was associated with the prevention of sickness and the continuation of good health. Her name is the source of the word "hygiene
Hygiene
Hygiene refers to the set of practices perceived by a community to be associated with the preservation of health and healthy living. While in modern medical sciences there is a set of standards of hygiene recommended for different situations, what is considered hygienic or not can vary between...
".
She was imported by the Romans as the Goddess Valetudo, the goddess of personal health, but in time she started to be increasingly identified with the ancient Italian goddess of social welfare, Salus
Salus
Salus was a minor Roman goddess. She was the personification of well-being of both the individual and the state. She is sometimes erroneously associated with the Greek goddess Hygieia....
.

At Athens, Hygieia was the subject of a local cult since at least the 7th century BC. "Athena Hygieia" was one of the cult titles given to Athena
Athena
In Greek mythology, Athena, Athenê, or Athene , also referred to as Pallas Athena/Athene , is the goddess of wisdom, courage, inspiration, civilization, warfare, strength, strategy, the arts, crafts, justice, and skill. Minerva, Athena's Roman incarnation, embodies similar attributes. Athena is...
, as Plutarch recounts of the building of the Parthenon
Parthenon
The Parthenon is a temple on the Athenian Acropolis, Greece, dedicated to the Greek goddess Athena, whom the people of Athens considered their virgin patron. Its construction began in 447 BC when the Athenian Empire was at the height of its power. It was completed in 438 BC, although...
(447-432 BC):

However, the cult of Hygieia as an independent goddess did not begin to spread out until the Delphic oracle recognized her, and after the devastating Plague of Athens
Plague of Athens
The Plague of Athens was a devastating epidemic which hit the city-state of Athens in ancient Greece during the second year of the Peloponnesian War , when an Athenian victory still seemed within reach. It is believed to have entered Athens through Piraeus, the city's port and sole source of food...
(430-27 BC) and in Rome in 293 BC.

In the 2nd century AD, Pausanias
Pausanias (geographer)
Pausanias was a Greek traveler and geographer of the 2nd century AD, who lived in the times of Hadrian, Antoninus Pius and Marcus Aurelius. He is famous for his Description of Greece , a lengthy work that describes ancient Greece from firsthand observations, and is a crucial link between classical...
noted the statues both of Hygieia and of Athena Hygieia near the entrance to the Acropolis
Acropolis
Acropolis means "high city" in Greek, literally city on the extremity and is usually translated into English as Citadel . For purposes of defense, early people naturally chose elevated ground to build a new settlement, frequently a hill with precipitous sides...
of Athens.

Hygieia's primary temples were in Epidaurus
Epidaurus
Epidaurus was a small city in ancient Greece, at the Saronic Gulf. Two modern towns bear the name Epidavros : Palaia Epidavros and Nea Epidavros. Since 2010 they belong to the new municipality of Epidavros, part of the peripheral unit of Argolis...
, Corinth, Cos
Kos
Kos or Cos is a Greek island in the south Sporades group of the Dodecanese, next to the Gulf of Gökova/Cos. It measures by , and is from the coast of Bodrum, Turkey and the ancient region of Caria. Administratively the island forms a separate municipality within the Kos peripheral unit, which is...
and Pergamon
Pergamon
Pergamon , or Pergamum, was an ancient Greek city in modern-day Turkey, in Mysia, today located from the Aegean Sea on a promontory on the north side of the river Caicus , that became the capital of the Kingdom of Pergamon during the Hellenistic period, under the Attalid dynasty, 281–133 BC...
. Pausanias
Pausanias (geographer)
Pausanias was a Greek traveler and geographer of the 2nd century AD, who lived in the times of Hadrian, Antoninus Pius and Marcus Aurelius. He is famous for his Description of Greece , a lengthy work that describes ancient Greece from firsthand observations, and is a crucial link between classical...
remarked that, at the Asclepieion of Titane
Titane
Titane may refer to*Titan *Titani, an ancient city and a modern village in the Korinthia prefecture Category:Sicyon...
in Sicyon
Sicyon
Sikyon was an ancient Greek city situated in the northern Peloponnesus between Corinth and Achaea on the territory of the present-day prefecture of Corinthia...
(founded by Alexanor
Alexanor
Alexanor was a son of Machaon, and grandson of the Greek god Asclepius, who built to his grandfather a temple on the summit of Titane in the territory of Sicyon. Around it there were dwellings for the use of those who came to solicit the aid of the god. Alexanor himself too was worshiped there,...
, Asclepius' grandson), statues of Hygieia were covered by women's hair and pieces of Babylon
Babylon
Babylon was an Akkadian city-state of ancient Mesopotamia, the remains of which are found in present-day Al Hillah, Babil Province, Iraq, about 85 kilometers south of Baghdad...
ian clothes. According to inscriptions, the same sacrifices were offered at Paros
Paros
Paros is an island of Greece in the central Aegean Sea. One of the Cyclades island group, it lies to the west of Naxos, from which it is separated by a channel about wide. It lies approximately south-east of Piraeus. The Municipality of Paros includes numerous uninhabited offshore islets...
.

Ariphron
Ariphron
Ariphron was the name of several people from ancient Greek history:*Ariphron, the father of Xanthippus, and grandfather of Pericles, both prominent Athenian statesmen. He was a member of the Alcmaeonid family.*Ariphron, the brother of Pericles....
, a Sicyonian artist from the 4th century BC wrote a well-known hymn
Hymn
A hymn is a type of song, usually religious, specifically written for the purpose of praise, adoration or prayer, and typically addressed to a deity or deities, or to a prominent figure or personification...
celebrating her. Statues of Hygieia were created by Scopas
Scopas
Scopas or Skopas was an Ancient Greek sculptor and architect, born on the island of Paros. Scopas worked with Praxiteles, and he sculpted parts of the Mausoleum of Halicarnassus, especially the reliefs. He led the building of the new temple of Athena Alea at Tegea...
, Bryaxis
Bryaxis
Bryaxis was an ancient Greek sculptor. He created the sculptures on the north side of the mausoleum of Maussollos at Halicarnassus which was commissioned by the queen Artemisia II of Caria in memory of her brother and husband, Mausolus...
and Timotheus
Timotheus
Timotheus may refer to:*Timotheus , Athenian statesman and general*Timotheus of Miletus, 5th century BCE Greek poet*Timotheus , a musician at the court of Alexander the Great...
, among others, but there is no clear description of what they looked like. She was often depicted as a young woman feeding a large snake that was wrapped around her body or drinking from a jar that she carried. These attributes were later adopted by the Gallo-Roman healing goddess, Sirona
Sirona
In Celtic mythology, Sirona was a goddess worshipped predominantly in East Central Gaul and along the Danubian limes. A healing deity, she was associated with healing springs; her attributes were snakes and eggs. She was sometimes depicted with Apollo Grannus or Apollo Borvo...
. Hygieia was accompanied by her brother, Telesphorus
Telesphorus (mythology)
In Greek mythology, Telesphorus was a son of Asclepius. He frequently accompanied his sister, Hygieia. He was a dwarf whose head was always covered with a hood or cap....
.