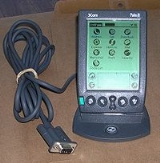 Encyclopedia
The Palm III was a personal digital assistant
Personal digital assistant
A personal digital assistant , also known as a palmtop computer, or personal data assistant, is a mobile device that functions as a personal information manager. Current PDAs often have the ability to connect to the Internet...
made by the Palm Computing division of 3Com
3Com
3Com was a pioneering digital electronics manufacturer best known for its computer network infrastructure products. The company was co-founded in 1979 by Robert Metcalfe, Howard Charney, Bruce Borden, and Greg Shaw...
. It went on sale in 1998 as a replacement for the PalmPilot
PalmPilot
The PalmPilot Personal and PalmPilot Professional are the second generation of Palm PDA devices produced by Palm Inc...
handheld. It was the first Palm handheld to support infrared
IRDA
IRDA may refer to:* Infrared Data Association, in information and communications technology , a standard for communication between devices over short distances using infrared signals...
file transfer and a Flash ROM-capable operating system
Operating system
An operating system is a set of programs that manage computer hardware resources and provide common services for application software. The operating system is the most important type of system software in a computer system...
. At release, the Palm III was priced at US$400.

At first glance, the most notable difference between the Palm III and its predecessor, the PalmPilot
PalmPilot
The PalmPilot Personal and PalmPilot Professional are the second generation of Palm PDA devices produced by Palm Inc...
, is the more rugged and streamlined case. Other differences include a removable hard cover to protect the screen, removal of the memory
Memory
In psychology, memory is an organism's ability to store, retain, and recall information and experiences. Traditional studies of memory began in the fields of philosophy, including techniques of artificially enhancing memory....
door, a more recessed contrast adjustment knob, an infrared port, and a battery
Battery (electricity)
An electrical battery is one or more electrochemical cells that convert stored chemical energy into electrical energy. Since the invention of the first battery in 1800 by Alessandro Volta and especially since the technically improved Daniell cell in 1836, batteries have become a common power...
door less prone to accidentally falling off.

The Palm III ran the new PalmOS version 3.0 which featured a new application
Application software
Application software, also known as an application or an "app", is computer software designed to help the user to perform specific tasks. Examples include enterprise software, accounting software, office suites, graphics software and media players. Many application programs deal principally with...
launcher, an extra font
Font
In typography, a font is traditionally defined as a quantity of sorts composing a complete character set of a single size and style of a particular typeface...
size, bug
Software bug
A software bug is the common term used to describe an error, flaw, mistake, failure, or fault in a computer program or system that produces an incorrect or unexpected result, or causes it to behave in unintended ways. Most bugs arise from mistakes and errors made by people in either a program's...
fixes, and other improvements. It featured two megabytes of EDO
EDO
Edo may refer to:* Edo, the historical name for Tokyo, Japan* Edo Aircraft Corporation, a defunct American company that primarily designed aircraft floats* Edo language, a language spoken in Nigeria* Edo period, in Japanese history...
SDRAM
SDRAM
Synchronous dynamic random access memory is dynamic random access memory that is synchronized with the system bus. Classic DRAM has an asynchronous interface, which means that it responds as quickly as possible to changes in control inputs...
for storage of user data
Data
The term data refers to qualitative or quantitative attributes of a variable or set of variables. Data are typically the results of measurements and can be the basis of graphs, images, or observations of a set of variables. Data are often viewed as the lowest level of abstraction from which...
and software and two megabytes of Flash ROM for storage of the operating system and built-in applications.

The Palm III had the OS ROM
Read-only memory
Read-only memory is a class of storage medium used in computers and other electronic devices. Data stored in ROM cannot be modified, or can be modified only slowly or with difficulty, so it is mainly used to distribute firmware .In its strictest sense, ROM refers only...
and RAM mounted on a memory card separate from the motherboard
Motherboard
In personal computers, a motherboard is the central printed circuit board in many modern computers and holds many of the crucial components of the system, providing connectors for other peripherals. The motherboard is sometimes alternatively known as the mainboard, system board, or, on Apple...
. This card could be replaced by a third party upgrade card to increase the Palm III's storage or functionality.