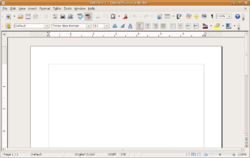 Application software, also known as an application or an "app", is computer software
Computer software
Computer software, or just software, is a collection of computer programs and related data that provide the instructions for telling a computer what to do and how to do it....
designed to help the user to perform specific tasks. Examples include enterprise software
Enterprise software
Enterprise software, also known as enterprise application software , is software used in organizations, such as in a business or government, contrary to software chosen by individuals...
, accounting software
Accounting software
Accounting software is application software that records and processes accounting transactions within functional modules such as accounts payable, accounts receivable, payroll, and trial balance. It functions as an accounting information system...
, office suite
Office suite
In computing, an office suite, sometimes called an office software suite or productivity suite is a collection of programs intended to be used by knowledge workers...
s, graphics software
Graphics software
In computer graphics, graphics software or image editing software is a program or collection of programs that enable a person to manipulate visual images on a computer....
and media players. Many application programs deal principally with documents
Document file format
A document file format is a text or binary file format for storing documents on a storage media, especially for use by computers.There currently exist a multitude of incompatible document file formats....
. Apps may be bundled
Product bundling
Product bundling is a marketing strategy that involves offering several products for sale as one combined product. This strategy is very common in the software business , in the cable television industry Product bundling is a marketing strategy that involves offering several products for sale as...
with the computer and its system software, or may be published separately. Some users are satisfied with the bundled apps and need never install one.

Similar relationships apply in other fields. For example, a shopping mall does not provide the merchandise a shopper is seeking, but provides space and services for retailers that serve the shopper. Rail tracks similarly support trains, allowing the trains to transport passengers.

Application software applies the power of a particular computing platform or system software to a particular purpose. Some apps such as Microsoft Office
Microsoft Office
Microsoft Office is a non-free commercial office suite of inter-related desktop applications, servers and services for the Microsoft Windows and Mac OS X operating systems, introduced by Microsoft in August 1, 1989. Initially a marketing term for a bundled set of applications, the first version of...
are available in versions for several different platforms; others have narrower requirements and are thus called, for example, a Geography
Geographic Information System
A geographic information system, geographical information science, or geospatial information studies is a system designed to capture, store, manipulate, analyze, manage, and present all types of geographically referenced data...
application for Windows
Microsoft Windows
Microsoft Windows is a series of operating systems produced by Microsoft.Microsoft introduced an operating environment named Windows on November 20, 1985 as an add-on to MS-DOS in response to the growing interest in graphical user interfaces . Microsoft Windows came to dominate the world's personal...
or an Android application for education
Educational software
Educational software is computer software, the primary purpose of which is teaching or self-learning.-Early History, 1940s - 1970s:The use of computer hardware and software in education and training dates to the early 1940s, when American researchers developed flight simulators which used analog...
or Linux gaming
Linux gaming
Linux gaming refers to playing or developing video games for the Linux operating systems.- Background :Linux gaming refers to all game titles that can run on Linux based operating systems. This can refer to free / open source games, which may also be commercial, that run natively on Linux, or...
. Sometimes a new and popular application arises which only runs on one platform, increasing the desirability of that platform. This is called a killer application
Killer application
A killer application , in the jargon of marketing teams, has been used to refer to any computer program that is so necessary or desirable that it proves the core value of some larger technology, such as computer hardware, gaming console, software, or an operating system...
.

In information technology
Information technology
Information technology is the acquisition, processing, storage and dissemination of vocal, pictorial, textual and numerical information by a microelectronics-based combination of computing and telecommunications...
, an application is a computer program
Computer program
A computer program is a sequence of instructions written to perform a specified task with a computer. A computer requires programs to function, typically executing the program's instructions in a central processor. The program has an executable form that the computer can use directly to execute...
designed to help people perform an activity. An application thus differs from an operating system
Operating system
An operating system is a set of programs that manage computer hardware resources and provide common services for application software. The operating system is the most important type of system software in a computer system...
(which runs a computer), a utility
Utility software
Utility software is system software designed to help analyze, configure, optimize or maintain a computer. A single piece of utility software is usually called a utility or tool....
(which performs maintenance or general-purpose chores), and a programming language
Programming language
A programming language is an artificial language designed to communicate instructions to a machine, particularly a computer. Programming languages can be used to create programs that control the behavior of a machine and/or to express algorithms precisely....
(with which computer programs are created). Depending on the activity for which it was designed, an application can manipulate text, numbers, graphics, or a combination of these elements. Some application packages offer considerable computing power by focusing on a single task, such as word processing; others, called integrated software
Integrated software
Integrated software is software for personal computers that combines the most commonly used functions of many productivity software programs into one application....
, offer somewhat less power but include several applications.
User-written software tailors systems to meet the user's specific needs. User-written software include spreadsheet templates, word processor macros, scientific simulations, graphics and animation scripts. Even email filters are a kind of user software. Users create this software themselves and often overlook how important it is.

The delineation between system software such as operating system
Operating system
An operating system is a set of programs that manage computer hardware resources and provide common services for application software. The operating system is the most important type of system software in a computer system...
s and application software is not exact, however, and is occasionally the object of controversy. For example, one of the key questions in the United States v. Microsoft
United States v. Microsoft
United States v. Microsoft was a set of civil actions filed against Microsoft Corporation pursuant to the Sherman Antitrust Act of 1890 Section 1 and 2 on May 8, 1998 by the United States Department of Justice and 20 U.S. states. Joel I. Klein was the lead prosecutor...
antitrust
Antitrust
The United States antitrust law is a body of laws that prohibits anti-competitive behavior and unfair business practices. Antitrust laws are intended to encourage competition in the marketplace. These competition laws make illegal certain practices deemed to hurt businesses or consumers or both,...
trial was whether Microsoft's Internet Explorer
Internet Explorer
Windows Internet Explorer is a series of graphical web browsers developed by Microsoft and included as part of the Microsoft Windows line of operating systems, starting in 1995. It was first released as part of the add-on package Plus! for Windows 95 that year...
web browser
Web browser
A web browser is a software application for retrieving, presenting, and traversing information resources on the World Wide Web. An information resource is identified by a Uniform Resource Identifier and may be a web page, image, video, or other piece of content...
was part of its Windows
Microsoft Windows
Microsoft Windows is a series of operating systems produced by Microsoft.Microsoft introduced an operating environment named Windows on November 20, 1985 as an add-on to MS-DOS in response to the growing interest in graphical user interfaces . Microsoft Windows came to dominate the world's personal...
operating system or a separable piece of application software. As another example, the GNU/Linux naming controversy
GNU/Linux naming controversy
The GNU/Linux naming controversy is a dispute among members of the free and open source software community over how to refer to the computer operating system commonly called Linux....
is, in part, due to disagreement about the relationship between the Linux kernel
Linux kernel
The Linux kernel is an operating system kernel used by the Linux family of Unix-like operating systems. It is one of the most prominent examples of free and open source software....
and the operating systems built over this kernel
Kernel (computing)
In computing, the kernel is the main component of most computer operating systems; it is a bridge between applications and the actual data processing done at the hardware level. The kernel's responsibilities include managing the system's resources...
. In some types of embedded system
Embedded system
An embedded system is a computer system designed for specific control functions within a larger system. often with real-time computing constraints. It is embedded as part of a complete device often including hardware and mechanical parts. By contrast, a general-purpose computer, such as a personal...
s, the application software and the operating system software may be indistinguishable to the user, as in the case of software used to control a VCR, DVD
DVD
A DVD is an optical disc storage media format, invented and developed by Philips, Sony, Toshiba, and Panasonic in 1995. DVDs offer higher storage capacity than Compact Discs while having the same dimensions....
player or microwave oven
Microwave oven
A microwave oven is a kitchen appliance that heats food by dielectric heating, using microwave radiation to heat polarized molecules within the food...
. The above definitions may exclude some applications that may exist on some computers in large organizations. For an alternative definition of an app: see Application Portfolio Management.

There are many types of application software:


Applications can also be classified by computing platform such as a particular operating system
Operating system
An operating system is a set of programs that manage computer hardware resources and provide common services for application software. The operating system is the most important type of system software in a computer system...
, delivery network such as in cloud computing
Cloud computing
Cloud computing is the delivery of computing as a service rather than a product, whereby shared resources, software, and information are provided to computers and other devices as a utility over a network ....
and Web 2.0
Web 2.0
The term Web 2.0 is associated with web applications that facilitate participatory information sharing, interoperability, user-centered design, and collaboration on the World Wide Web...
applications, or delivery devices such as mobile apps
Mobile apps
Mobile apps, also called mobile applications, are software applications, usually designed to run on smartphones and tablet computers. They are available through application distribution platforms which are typically operated by the owner of the mobile operating system, such as the App Store,...
for mobile devices.