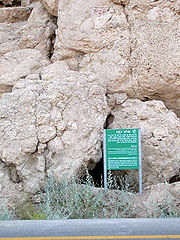 The Palestine Exploration Fund is a British society often simply known as the PEF. It was founded in 1865 and is still functioning today. Its initial object was to carry out surveys of the topography and ethnography of Ottoman
Ottoman Empire
The Ottoman EmpireIt was usually referred to as the "Ottoman Empire", the "Turkish Empire", the "Ottoman Caliphate" or more commonly "Turkey" by its contemporaries...
Palestine
Palestine
Palestine is a conventional name, among others, used to describe the geographic region between the Mediterranean Sea and the Jordan River, and various adjoining lands....
with a remit that fell somewhere between an expeditionary survey and military intelligence gathering. Consequently, it had a complex relationship with Corps of Royal Engineers, and its members sent back reports on the need to salvage and modernize the region.

The beginnings of the Palestine Exploration Fund are rooted in a literary society founded by British Consul James Finn
James Finn
James Finn was a British Consul in Jerusalem, in the then Ottoman Empire . He arrived in 1845 with his wife Elizabeth Anne Finn. Finn was a devout Christian, who belonged to the London Society for Promoting Christianity Amongst the Jews, but who did not engage in missionary work during his years in...
and his wife Elizabeth.Finn, Elizabet. Reminiscences of Mrs. Finn. London. Marshall, Morgan,& Scott. 1929. p.252. Many photographs of Palestine have been kept from this period

On 22 June 1865, a group of Biblical archaeologists
Biblical archaeology
For the movement associated with William F. Albright and also known as biblical archaeology, see Biblical archaeology school. For the interpretation of biblical archaeology in relation to biblical historicity, see The Bible and history....
and clergymen financed the fund, with an initial fund of only £300. The most notable of the founders were Arthur P. Stanley
Arthur Penrhyn Stanley
Arthur Penrhyn Stanley was an English churchman, Dean of Westminster, known as Dean Stanley. His position was that of a Broad Churchman and he was the author of works on Church History.-Life and times:...
, the Dean of Westminster
Westminster Abbey
The Collegiate Church of St Peter at Westminster, popularly known as Westminster Abbey, is a large, mainly Gothic church, in the City of Westminster, London, United Kingdom, located just to the west of the Palace of Westminster. It is the traditional place of coronation and burial site for English,...
, and George Grove
George Grove
Sir George Grove, CB was an English writer on music, known as the founding editor of Grove's Dictionary of Music and Musicians....
, who later founded the Royal College of Music
Royal College of Music
The Royal College of Music is a conservatoire founded by Royal Charter in 1882, located in South Kensington, London, England.-Background:The first director was Sir George Grove and he was followed by Sir Hubert Parry...
and was responsible for Grove's Dictionary of Music. Its founders established the Fund "for the purpose of investigating the Archaeology, Geography, manners, customs and culture, Geology and Natural History of the Holy Land
Holy Land
The Holy Land is a term which in Judaism refers to the Kingdom of Israel as defined in the Tanakh. For Jews, the Land's identifiction of being Holy is defined in Judaism by its differentiation from other lands by virtue of the practice of Judaism often possible only in the Land of Israel...
."

The preliminary meeting of the Society of the Palestine Exploration Fund took place in the Jerusalem Chamber of Westminster Abbey
Westminster Abbey
The Collegiate Church of St Peter at Westminster, popularly known as Westminster Abbey, is a large, mainly Gothic church, in the City of Westminster, London, United Kingdom, located just to the west of the Palace of Westminster. It is the traditional place of coronation and burial site for English,...
. William Thompson, the Archbishop of York, read out the original prospectus at the first organisational meeting;

[O]ur object is strictly an inductive inquiry. We are not to be a religious society; we are not about to launch controversy; we are about to apply the rules of science, which are so well understood by us in our branches, to an investigation into the facts concerning the Holy Land. "No country should be of so much interest to us as that in which the documents of our Faith were written, and the momentous events they describe enacted. At the same time no country more urgently requires illustration ... Even to a casual traveller in the Holy Land the Bible
Bible
The Bible refers to any one of the collections of the primary religious texts of Judaism and Christianity. There is no common version of the Bible, as the individual books , their contents and their order vary among denominations...
becomes, in its form, and therefore to some extent in its substance, a new book. Much would be gained by ...bringing to light the remains of so many races and generations which must lie concealed under the accumulation of rubbish and ruins on which those villages stand ...

The PEF conducted many early excavations of biblical and post biblical sites around the Levant
Levant
The Levant or ) is the geographic region and culture zone of the "eastern Mediterranean littoral between Anatolia and Egypt" . The Levant includes most of modern Lebanon, Syria, Jordan, Israel, the Palestinian territories, and sometimes parts of Turkey and Iraq, and corresponds roughly to the...
, as well as studies involving natural history, anthropology, history and geography.

Among other noteworthy individuals associated with the fund were:

Today the fund is located at 2 Hinde Mews, W1U 2AA, off Jason Court and Marylebone Lane north of Wigmore Street
Wigmore Street
Wigmore Street is a street in the City of Westminster, in the West End of London, England. The street runs for about 600 yards parallel and to the north of Oxford Street between Portman Square to the west and Cavendish Square to the east....
in Marylebone
Marylebone
Marylebone is an affluent inner-city area of central London, located within the City of Westminster. It is sometimes written as St. Marylebone or Mary-le-bone....
section of the City of Westminster
City of Westminster
The City of Westminster is a London borough occupying much of the central area of London, England, including most of the West End. It is located to the west of and adjoining the ancient City of London, directly to the east of the Royal Borough of Kensington and Chelsea, and its southern boundary...
, London. It holds regular events and lectures and provides annual grants for various projects. The PEF's offices also house collections of photographs, pictures, maps and various antiquities. The journal of the PEF devoted to the study of the history, archaeology and geography of the Levant is Palestine Exploration Quarterly which has appeared since 1869. There are currently three volumes published each year.