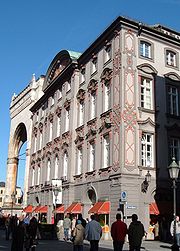 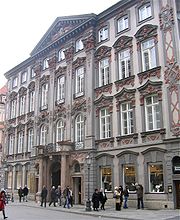 The Palais Preysing is a late-Baroque
Baroque architecture
Baroque architecture is a term used to describe the building style of the Baroque era, begun in late sixteenth century Italy, that took the Roman vocabulary of Renaissance architecture and used it in a new rhetorical and theatrical fashion, often to express the triumph of the Catholic Church and...
mansion in Munich
Munich
Munich The city's motto is "" . Before 2006, it was "Weltstadt mit Herz" . Its native name, , is derived from the Old High German Munichen, meaning "by the monks' place". The city's name derives from the monks of the Benedictine order who founded the city; hence the monk depicted on the city's coat...
, southern Germany
Germany
Germany , officially the Federal Republic of Germany , is a federal parliamentary republic in Europe. The country consists of 16 states while the capital and largest city is Berlin. Germany covers an area of 357,021 km2 and has a largely temperate seasonal climate...
, which served as residence for the Counts of Preysing. To distinguish it from the nearby Palais Neuhaus-Preysing, it is also called the Elder Palais Preysing.

Joseph Effner
Joseph Effner
Joseph Effner was a German architect and decorator.Effner was born in Dachau as a son of the court gardener Christian Öffner. Effner accompanied the elector of Bavaria Max Emanuel to Bruxelles. In 1706 Effner was retrained by Gabriel Germain Boffrand in Paris. Here he changed his family name to...
built the mansion between 1723 and 1728 for the Count Johann Maximilian of Preysing opposite to the Residenz
Residenz, Munich
The Munich Residenz is the former royal palace of the Bavarian monarchs in the center of the city of Munich, Germany...
. It is Munich's first Rococo
Rococo
Rococo , also referred to as "Late Baroque", is an 18th-century style which developed as Baroque artists gave up their symmetry and became increasingly ornate, florid, and playful...
style palace. The exterior walls were embellished with stucco. Since its restoration after the destructions of World War II, the building houses shops and offices but the decorated stairway is open for the public.

The mansion is situated behind the Feldherrnhalle
Feldherrnhalle
The Feldherrnhalle is a monumental loggia in Munich, Germany. It was built between 1841 and 1844 at the southern end of Munich's Ludwigstrasse next to the Palais Preysing and east of the Hofgarten. Previously the Gothic Schwabinger Tor occupied that place...
at Odeonsplatz
Odeonsplatz
Odeonsplatz is a large square in central Munich which was named after the former concert hall Odeon.-Architecture:In 1791 the medieval city wall was demolished and plans for a square at the point of the Schwabing Gate could be realized with the erection of the Brienner Straße in 1816. The...
, the little alley behind the Palais Preysing connecting the Residenzstrasse and the Theatinerstrasse is called Viscardigasse (after Giovanni Antonio Viscardi
Giovanni Antonio Viscardi
Giovanni Antonio Viscardi was a Swiss architect of the baroque, who worked mostly in Bavaria....
), but it used to be known by the locals as "Drueckebergergasse". "Drueckeberger" is a German slang expression for someone who tries to avoid his duty. Adolf Hitler
Adolf Hitler
Adolf Hitler was an Austrian-born German politician and the leader of the National Socialist German Workers Party , commonly referred to as the Nazi Party). He was Chancellor of Germany from 1933 to 1945, and head of state from 1934 to 1945...
ordered that everyone passing the Feldherrnhalle had to give the Nazi salute as they walked by, as a tribute to the Nazi sympathisers who had been killed at that spot in the Beer Hall Putsch
Beer Hall Putsch
The Beer Hall Putsch was a failed attempt at revolution that occurred between the evening of 8 November and the early afternoon of 9 November 1923, when Nazi Party leader Adolf Hitler, Generalquartiermeister Erich Ludendorff, and other heads of the Kampfbund unsuccessfully tried to seize power...
of 1923. Many people practised a kind of passive resistance by making a detour down the Viscardigasse, to avoid passing the Feldherrnhalle and having to salute.
The source of this article is wikipedia, the free encyclopedia.  The text of this article is licensed under the GFDL.