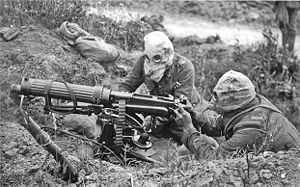 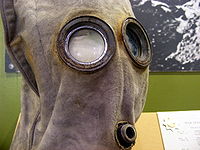 The P helmet, PH helmet and PHG helmet were early types of gas mask
Gas mask
A gas mask is a mask put on over the face to protect the wearer from inhaling airborne pollutants and toxic gases. The mask forms a sealed cover over the nose and mouth, but may also cover the eyes and other vulnerable soft tissues of the face. Some gas masks are also respirators, though the word...
issued by the British Army
British Army
The British Army is the land warfare branch of Her Majesty's Armed Forces in the United Kingdom. It came into being with the unification of the Kingdom of England and Scotland into the Kingdom of Great Britain in 1707. The new British Army incorporated Regiments that had already existed in England...
in the First World War, to protect troops against chlorine
Chlorine
Chlorine is the chemical element with atomic number 17 and symbol Cl. It is the second lightest halogen, found in the periodic table in group 17. The element forms diatomic molecules under standard conditions, called dichlorine...
, phosgene
Phosgene
Phosgene is the chemical compound with the formula COCl2. This colorless gas gained infamy as a chemical weapon during World War I. It is also a valued industrial reagent and building block in synthesis of pharmaceuticals and other organic compounds. In low concentrations, its odor resembles...
and tear gases. Rather than having a separate filter for removing the toxic chemicals, they consisted of a gas-permeable hood worn over the head which was treated with chemicals.

The P (or Phenate) Helmet, officially called the Tube Helmet,
appeared in July 1915, replacing the simpler Hypo Helmet
Hypo helmet
The Hypo helmet, or British Smoke Hood , was an early British gas mask in World War I.The first use of poison gas on the Western Front was on 22 April 1915, by the Germans at Ypres, against Canadian and French colonial troops. The initial response was to equip troops with cotton mouth pads for...
. It featured two mica
Mica
The mica group of sheet silicate minerals includes several closely related materials having highly perfect basal cleavage. All are monoclinic, with a tendency towards pseudohexagonal crystals, and are similar in chemical composition...
eyepieces instead of the single visor of its predecessor, and added an exhaust valve fed from a metal tube which the wearer held in his mouth. The exhaust valve was needed because a double layer of flannel – one treated and one not – was needed because the solution attacked the fabric.

It had flannel layers of cloth-dipped in sodium phenolate and glycerin and protected against chlorine and phosgene, but not against tear gas. Around 9 million were made.

The PH Helmet (Phenate Hexamine) replaced it in October 1915, and added hexamethylene tetramine, which greatly improved protection against phosgene and added protection against hydrocyanic acid. Around 14 million were made and it remained in service until the end of the war by which time it was relegated to second line use.

The PHG Helmet appeared in January 1916 and was similar to the PH Helmet but had a facepiece made of rubber sponge to add protection against tear gas. Around one and a half million were produced in 1916-1917.

It was finally superseded by the small box respirator in February 1916, which was much more satisfactory against high concentrations
of phosgene or lachrymators.