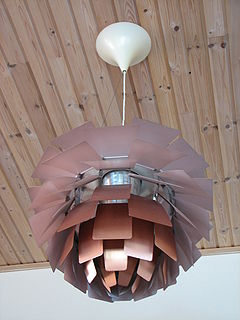 The PH Artichoke Pendant is a designer
Designer
A designer is a person who designs. More formally, a designer is an agent that "specifies the structural properties of a design object". In practice, anyone who creates tangible or intangible objects, such as consumer products, processes, laws, games and graphics, is referred to as a...
Light fixture
Light fixture
A light fixture, light fitting, or luminaire is an electrical device used to create artificial light and/or illumination, by use of an electric lamp...
manufactured by Louis Poulsen. It was designed by Poul Henningsen
Poul Henningsen
Poul Henningsen , Danish author, architect and critic, was one of the leading figures of the cultural life of Denmark between the World Wars. In Denmark, he is often referred to as PH.-Early life and education:...
in 1958. A chrome inner diffuser also assists in the proper even reflection of the light source. The light source can be an incandescent bulb (high powered halogen
Halogen lamp
A halogen lamp, also known as a tungsten halogen lamp, is an incandescent lamp with a tungsten filament contained within an inert gas and a small amount of a halogen such as iodine or bromine. The chemical halogen cycle redeposits evaporated tungsten back on to the filament, extending the life of...
or xenon
Xenon arc lamp
A xenon arc lamp is a specialized type of gas discharge lamp, an electric light that produces light by passing electricity through ionized xenon gas at high pressure to produce a bright white light that closely mimics natural sunlight...
), fluorescent
Fluorescent lamp
A fluorescent lamp or fluorescent tube is a gas-discharge lamp that uses electricity to excite mercury vapor. The excited mercury atoms produce short-wave ultraviolet light that then causes a phosphor to fluoresce, producing visible light. A fluorescent lamp converts electrical power into useful...
(with the ballast mounted in fixture canopy), or metal halide
Metal halide lamp
Metal-halide lamps, a member of the high-intensity discharge family of lamps, produce high light output for their size, making them a compact, powerful, and efficient light source. By adding rare earth metal salts to the mercury vapor lamp, improved luminous efficacy and light color is obtained...
(canopy-mounted ballast). The metal halide sources are used in the largest of the Artichoke fixtures. For years, a number of companies have tried to replicate the Artichoke fixture, only a handful have made a replica that is at all geometrically and cosmetically similar.

The Poulson Artichoke Pendent comes in copper
Copper
Copper is a chemical element with the symbol Cu and atomic number 29. It is a ductile metal with very high thermal and electrical conductivity. Pure copper is soft and malleable; an exposed surface has a reddish-orange tarnish...
, wet painted white or brushed
Brushed metal
Brushed metal is metal that has been abraded , usually with a fine grit sandpaper. The brushing gives the metal a distinctive look, as it retains some but not all of its metallic lustre and is given a pattern of very fine lines. It can be compared to metal with several small scratches all running...
stainless steel and in three different sizes. The leaves are laser-cut steel to produce shape lines reflective of modern design
Modernism
Modernism, in its broadest definition, is modern thought, character, or practice. More specifically, the term describes the modernist movement, its set of cultural tendencies and array of associated cultural movements, originally arising from wide-scale and far-reaching changes to Western society...
. The entire fixture is mounted by stainless steel
Stainless steel
In metallurgy, stainless steel, also known as inox steel or inox from French "inoxydable", is defined as a steel alloy with a minimum of 10.5 or 11% chromium content by mass....
aircraft cables to hold the unusually heavy weight of the light. A heavy duty UL Listed junction box is generally required to handle the weight of this pendant. The metal halide–sourced version utilizes a 220-277 volt AC power input, generally requiring a dedicated 20 A circuit and breaker.

The English name is PH Artichoke (artichoke
Artichoke
-Plants:* Globe artichoke, a partially edible perennial thistle originating in southern Europe around the Mediterranean* Jerusalem artichoke, a species of sunflower with an edible tuber...
)

The (original) Danish name is PH Kogle (conifer cone
Conifer cone
A cone is an organ on plants in the division Pinophyta that contains the reproductive structures. The familiar woody cone is the female cone, which produces seeds. The male cones, which produce pollen, are usually herbaceous and much less conspicuous even at full maturity...
)

The Norwegian and German name is PH Kogle/PH Zapfen (conifer cone
Conifer cone
A cone is an organ on plants in the division Pinophyta that contains the reproductive structures. The familiar woody cone is the female cone, which produces seeds. The male cones, which produce pollen, are usually herbaceous and much less conspicuous even at full maturity...
).