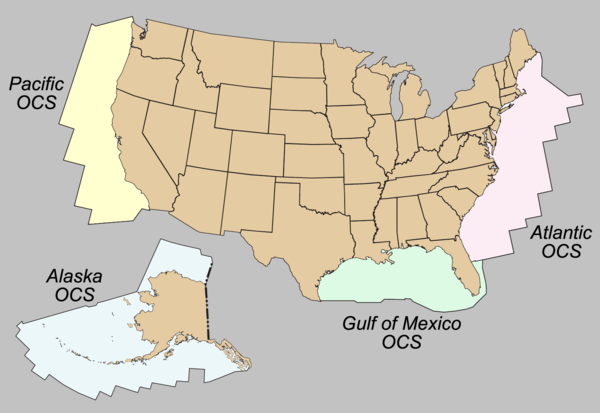 The United States OCS has been divided into four leasing regions:

State jurisdiction is defined as follows:

Coastlines are emergent
Emergent coastline
Emergent coastlines are stretches along the coast that have been exposed by the sea due to a relative fall in sea levels. This occurs due to either isostacy or eustacy....
. Thus the landward boundary of the outer continental shelf is a legal construct rather than a physical construct, modified only at intervals by appropriate processes of law
Law
Law is a system of rules and guidelines which are enforced through social institutions to govern behavior, wherever possible. It shapes politics, economics and society in numerous ways and serves as a social mediator of relations between people. Contract law regulates everything from buying a bus...
.http://www.mms.gov/offshore/mapping/OCSPolicyInfo.htm