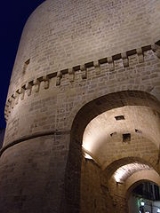 Encyclopedia
Otranto (ˈɔːtranto) is a town and comune
Comune
In Italy, the comune is the basic administrative division, and may be properly approximated in casual speech by the English word township or municipality.-Importance and function:...
in the province of Lecce
Province of Lecce
The Province of Lecce is a province in the Apulia region of Italy. Its capital is the city of Lecce. Totally included in the Salento peninsula, it is the second most populous province in Apulia and the twenty-first most populous in Italy....
(Apulia
Apulia
Apulia is a region in Southern Italy bordering the Adriatic Sea in the east, the Ionian Sea to the southeast, and the Strait of Òtranto and Gulf of Taranto in the south. Its most southern portion, known as Salento peninsula, forms a high heel on the "boot" of Italy. The region comprises , and...
, Italy
Italy
Italy , officially the Italian Republic languages]] under the European Charter for Regional or Minority Languages. In each of these, Italy's official name is as follows:;;;;;;;;), is a unitary parliamentary republic in South-Central Europe. To the north it borders France, Switzerland, Austria and...
), in a fertile region once famous for its breed of horses.

It is located on the east coast of the Salento
Salento
Salento is the south-eastern extremity of the Apulia region of Italy. It is a sub-peninsula of the main Italian Peninsula, sometimes described as the "heel" of the Italian "boot"...
peninsula. The Strait of Otranto
Strait of Otranto
The Strait of Otranto connects the Adriatic Sea with the Ionian Sea and separates Italy from Albania. Its width at Punta Palascìa, east of Salento is less than . The strait is named after the Italian city of Otranto.- History :...
, to which the city gives its name, connects the Adriatic Sea
Adriatic Sea
The Adriatic Sea is a body of water separating the Italian Peninsula from the Balkan peninsula, and the system of the Apennine Mountains from that of the Dinaric Alps and adjacent ranges...
with the Ionian Sea
Ionian Sea
The Ionian Sea , is an arm of the Mediterranean Sea, south of the Adriatic Sea. It is bounded by southern Italy including Calabria, Sicily and the Salento peninsula to the west, southern Albania to the north, and a large number of Greek islands, including Corfu, Zante, Kephalonia, Ithaka, and...
and Italy with Albania
Albania
Albania , officially known as the Republic of Albania , is a country in Southeastern Europe, in the Balkans region. It is bordered by Montenegro to the northwest, Kosovo to the northeast, the Republic of Macedonia to the east and Greece to the south and southeast. It has a coast on the Adriatic Sea...
. The harbour is small and has little trade.

The lighthouse Faro della Palascìa, at approximately 5 km southeast of Otranto, marks the most easterly point of the Italian mainland.

About 50 km south lies the promontory of Santa Maria di Leuca
Santa Maria di Leuca
Santa Maria di Leuca, often spelled simply Leuca, is a frazione of the comune of Castrignano del Capo, in the province of Lecce , southern Italy.A part of the town once belonged to the comune of Gagliano del Capo.- Description :...
(so called since ancient times from its white cliffs, leukos being Greek for white), the southeastern extremity of Italy, the ancient Promontorium lapygium or Sallentinum. The district between this promontory and Otranto is thickly populated and very fertile. 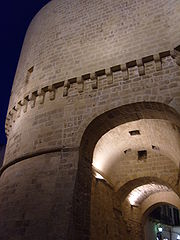 Otranto occupies the site of the ancient Hydrus (in Greek: Ὑδροῦς) or Hydruntum (in Latin), also known as Hydrunton, Hydronton, or Hydruntu. Otranto was a town of Greek origin, which, in the wars of Pyrrhus
Pyrrhus
Pyrrhus or Pyrrhos or Pyrros may refer to the following figures from Greek history and mythology:* Pyrrhus or Neoptolemus, son of Achilles* Pyrrhus of Epirus , famous king, to whom the term Pyrrhic victory alludes...
and of Hannibal sided against Rome.

In Roman times it was a city in the Provincia Calabria. As it is the nearest port to the eastern coast of the Adriatic Sea, it was perhaps more important than Brundisium (present Brindisi), under the Roman emperors as a point of embarkation for the East, as the distance to Apollonia was less than from Brundisium.

In the 8th century, it was for some time in the possession of duke Arechis II of Benevento
Arechis II of Benevento
Arechis II was Duke of Benevento, in southern Italy, from 758 until his death....
. It remained in the hands of the Byzantine emperors until it was among the last cities of Apulia to surrender to the Norman Robert Guiscard
Robert Guiscard
Robert d'Hauteville, known as Guiscard, Duke of Apulia and Calabria, from Latin Viscardus and Old French Viscart, often rendered the Resourceful, the Cunning, the Wily, the Fox, or the Weasel was a Norman adventurer conspicuous in the conquest of southern Italy and Sicily...
in 1068, and then became part of the Principality of Taranto
Principality of Taranto
The Principality of Taranto was a state in southern Italy created in 1088 for Bohemond I, eldest son of Robert Guiscard, as part of the peace between him and his younger brother Roger Borsa after a dispute over the succession to the Duchy of Apulia....
. In the Middle Ages the Jews had a school there.

In 1480, Mehmet the Conqueror sent an Ottoman Turkish fleet to invade Rome under the command of Gedik Ahmet Paşa. The army reached the shore on 28 July 1480 and the city was captured in two weeks on 11 August 1480. The Pope in panic, called for a crusade to be built up by Ferdinand I of Naples
Ferdinand I of Naples
Ferdinand I , also called Don Ferrante, was the King of Naples from 1458 to 1494. He was the natural son of Alfonso V of Aragon by Giraldona Carlino.-Biography:...
, among them notably troops of Hungarian king Matthias Corvinus. Turks controlled the city for 13 months. Mehmet II died en route to capture the rest of Italy . His successor II. Bayezit ordered Gedik Ahmet Paşa to be hung and the Turks retreated at the end on 11 September 1481.

In 1537, the famous Turkish corsair and Ottoman admiral Barbarossa captured Otranto and the Fortress of Castro, but the Turks were eventually repulsed from the city and the rest of Puglia.

In 1804, the city was obliged to harbour a French garrison that was established there to watch the movements of the English fleet. Under the French name of Otranto it was created a duché grand-fief de l'Empire in the Napoleonic kingdom of Naples for Joseph Fouché
Joseph Fouché
Joseph Fouché, 1st Duc d'Otrante was a French statesman and Minister of Police under Napoleon Bonaparte. In English texts his title is often translated as Duke of Otranto.-Youth:Fouché was born in Le Pellerin, a small village near Nantes...
, Napoleon's minister of Police (1809), the grandfather of Margareta Fouché
Margareta Fouché
Margareta Fouché d'Otrante, was the wife of Gustav Albrecht, 5th Prince of Sayn-Wittgenstein-Berleburg, and the mother of Richard, 6th Prince of Sayn-Wittgenstein-Berleburg, who is the husband of Princess Benedikte of Denmark....
. The family used the title of duc d'Otrante after Joseph Fouché's death.

In 1997 dozens of Albanians died here aboard a boat accidentally sunk by the Italian navy. 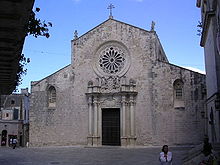