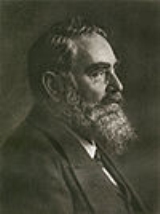 Born in Munich
Munich
Munich The city's motto is "" . Before 2006, it was "Weltstadt mit Herz" . Its native name, , is derived from the Old High German Munichen, meaning "by the monks' place". The city's name derives from the monks of the Benedictine order who founded the city; hence the monk depicted on the city's coat...
into an Upper Bavaria
Upper Bavaria
Upper Bavaria is one of the seven administrative regions of Bavaria, Germany.- Geography :Upper Bavaria is located in the southern portion of Bavaria, and is centered around the city of Munich. It is subdivided into four regions : Ingolstadt, Munich, Bayerisches Oberland , and Südostoberbayern...
n family from Aichach
Aichach
Aichach is a town in Germany, located in the Bundesland of Bavaria and situated just northeast of Augsburg. It is the capital of the district of Aichach-Friedberg. The municipality of Aichach counts some 20,000 inhabitants. It isn't far from the motorway that connects Munich and Stuttgart, the A8....
, he was the son of the first supervisor of the royal ore foundry in Munich, Ferdinand von Miller
Ferdinand Von Miller
Ferdinand von Miller was a German artisan who is noted for his furtherance of bronze founding.-Biography:Von Miller was born in Fürstenfeldbruck....
(1813–1887) and his wife Anna Pösl (1815–1890). Miller married the painter Marie Seitz in 1884, with whom he had seven children, two of whom, however, died in infancy. His brother was the ore caster and director of the Munich Academy of Fine Arts Baron Ferdinand von Miller
Ferdinand Freiherr von Miller
Ferdinand Miller, from 1875 von Miller and from 1912 Freiherr von Miller was a ore caster, sculptor and direktor of the Academy of Fine Arts, Munich...
. With the elevation of his father Ferdinand into the Bavarian nobility on 12 October 1875 and with the inscription of the family name on the roll of the aristocracy of the Kingdom of Bavaria on 30 December 1875, Oskar was simultaneously ennobled.

Miller decided to study technology and the building industry. Soon he discovered the recently developed field of electrotechnology, and so turned to it. In 1882 he organized the first electrotechnical exhibition in Germany, after having been fascinated by the first exhibition of this kind in Paris. At this exhibition, on 16 September 1882, in partnership with Marcel Deprez, he succeeded in transmitting an electric current for the first time over a distance of approximately 60 kilometers, from Miesbach
Miesbach
Miesbach is a town in Bavaria, Germany, and is the capital of the Miesbach district. The district is at an altitude of 697 metres above sea level. It covers an area of approximately 863.50 km² of alpine headlands and in 2004 had a population of 93,942. The town is located 48 km southeast...
to the Glaspalast
Glaspalast (Munich)
The Glaspalast was a glass and iron exhibition building in Munich modeled after The Crystal Palace in London. The Glaspalast opened for the Erste Allgemeine Deutsche Industrieausstellung on July 15, 1854.-Construction:The Glaspalast was ordered by Maximilian II, King of Bavaria, built by MAN AG...
in Munich.

In 1883, along with Emil Rathenau, he was a director of the German Edison Company (later AEG
AEG
Allgemeine Elektricitäts-Gesellschaft was a German producer of electrical equipment founded in 1883 by Emil Rathenau....
). He built the first power station in Germany in 1884 in Munich.

In 1890 he founded his own engineering office, which soon became prominent in the energy industry. He took over management of the electrotechnical exhibition
International Electro-Technical Exhibition - 1891
The 1891 International Electro-Technical Exhibition was held between 16 May and 19 October on the disused site of the three former “Westbahnhöfe” in Frankfurt am Main. The exhibition featured the first long distance transmission of high-power, three-phase electrical current, which was generated...
at Frankfurt am Main
Frankfurt
Frankfurt am Main , commonly known simply as Frankfurt, is the largest city in the German state of Hesse and the fifth-largest city in Germany, with a 2010 population of 688,249. The urban area had an estimated population of 2,300,000 in 2010...
in 1891. He succeeded in transmitting 20,000 V
Volt
The volt is the SI derived unit for electric potential, electric potential difference, and electromotive force. The volt is named in honor of the Italian physicist Alessandro Volta , who invented the voltaic pile, possibly the first chemical battery.- Definition :A single volt is defined as the...
three-phase
Three-phase
In electrical engineering, three-phase electric power systems have at least three conductors carrying voltage waveforms that are radians offset in time...
alternating current
Alternating current
In alternating current the movement of electric charge periodically reverses direction. In direct current , the flow of electric charge is only in one direction....
176 kilometers from Lauffen am Neckar
Lauffen
Lauffen am Neckar is a town in the district of Heilbronn, Baden-Württemberg, Germany. It is situated on the river Neckar, 9 km southwest of Heilbronn...
to Frankfurt am Main, a technical masterpiece and significant breakthrough in the transmission of alternating current.

In 1903 he fulfilled his dream of founding a museum devoted to science and technology — the Deutsches Museum. Miller had recruited widespread contacts for many years for such a museum. In Prince Regent Luitpold he found a patron who assured him also of national support. Famous scientists and entrepreneurs such as Max Planck
Max Planck
Max Karl Ernst Ludwig Planck, ForMemRS, was a German physicist who actualized the quantum physics, initiating a revolution in natural science and philosophy. He is regarded as the founder of the quantum theory, for which he received the Nobel Prize in Physics in 1918.-Life and career:Planck came...
, Hugo Junkers
Hugo Junkers
Hugo Junkers was an innovative German engineer, as his many patents in varied areas show...
, Wilhelm Conrad Roentgen and Emil Rathenau
Emil Rathenau
Emil Moritz Rathenau was a German entrepreneur and industrialist, a leading figure in the early European electrical industry.- Biography :...
advised him on the structure of the departments. Nearly all the material needed for the construction of the building was donated, owing to his commitment. With Carl von Linde
Carl von Linde
Professor Doctor Carl Paul Gottfried von Linde was a German engineer who developed refrigeration and gas separation technologies...
, he educated the first museum executive committee to the developer of the refrigeration technology and Walter von Dyck, the rector of the technical university.

In 1906 Emperor Wilhelm II
William II, German Emperor
Wilhelm II was the last German Emperor and King of Prussia, ruling the German Empire and the Kingdom of Prussia from 15 June 1888 to 9 November 1918. He was a grandson of the British Queen Victoria and related to many monarchs and princes of Europe...
laid the cornerstone of the museum complex in its current location on the museum island. Until the grand opening, which took place on von Miller's 70th birthday on 7 May 1925, smaller exhibits were set up in provisional rooms.

From 1918 to 1924 he was project manager in the building of the then-largest high pressure hydroelectric power station in the world, the Walchenseekraftwerk.

Miller died in 1934 in the Deutsches Museum as a consequence of a heart attack, a few months after the accidental death of his wife. He was interred next to the church at the Neuhausen Cemetery in Munich.

Several posts which von Miller held emphasize his personality and the importance he had in electro-technology, for example: