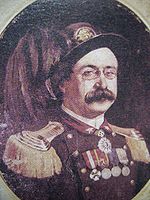 Oreste Baratieri was an Italian
Italy
Italy , officially the Italian Republic languages]] under the European Charter for Regional or Minority Languages. In each of these, Italy's official name is as follows:;;;;;;;;), is a unitary parliamentary republic in South-Central Europe. To the north it borders France, Switzerland, Austria and...
general and governor of Eritrea
Eritrea
Eritrea , officially the State of Eritrea, is a country in the Horn of Africa. Eritrea derives it's name from the Greek word Erethria, meaning 'red land'. The capital is Asmara. It is bordered by Sudan in the west, Ethiopia in the south, and Djibouti in the southeast...
who led the Italian army and was defeated in the First Italo–Ethiopian War's Battle of Adowa
Battle of Adowa
The Battle of Adwa was fought on 1 March 1896 between Ethiopia and Italy near the town of Adwa, Ethiopia, in Tigray...
.

Born in Condino
Condino
Condino is a comune in Trentino in the northern Italian region Trentino-Alto Adige/Südtirol, located about 45 km southwest of Trento. As of 31 December 2004, it had a population of 1,507 and an area of 33.8 km²....
, Trentino, Baratieri began his career as a volunteer for Giuseppe Garibaldi
Giuseppe Garibaldi
Giuseppe Garibaldi was an Italian military and political figure. In his twenties, he joined the Carbonari Italian patriot revolutionaries, and fled Italy after a failed insurrection. Garibaldi took part in the War of the Farrapos and the Uruguayan Civil War leading the Italian Legion, and...
's Redshirts, where he served during the Sicilian-Neapolitan campaign from May 11, 1860 to February 13, 1861. Following the unification of Italy, pursued a military career joining the Italian army later fighting at the Battle of Custoza
Battle of Custoza (1866)
The Battle of Custoza took place on June 24, 1866 during the Third Italian Independence War in the Italian unification process.The Austrian Imperial army with the old Venetian Army, led by Archduke Albert of Habsburg, defeated the Italian army led by Alfonso Ferrero la Marmora and Enrico Cialdini,...
on June 24, 1866. Rising to the rank of general by 1891, Baratieri was appointed commander of Italian forces in colonial Africa and the following year became governor of Eritrea
Eritrea
Eritrea , officially the State of Eritrea, is a country in the Horn of Africa. Eritrea derives it's name from the Greek word Erethria, meaning 'red land'. The capital is Asmara. It is bordered by Sudan in the west, Ethiopia in the south, and Djibouti in the southeast...
. Baratieri would spend several years fighting with local Ethiopian forces along the border from 1893 to 1895, winning several victories over the Mahdists, particularly at the Battle of Kassala
Battle of Kassala
The Battle of Kassala was fought on July 17, 1894, between Italian troops and Mahdist Sudanese forces. The Italians were victorious, and captured the town of Kassala.The Italians also captured two flags and a number of cannons....
on July 17, 1894.

Following Ethiopia
Ethiopia
Ethiopia , officially known as the Federal Democratic Republic of Ethiopia, is a country located in the Horn of Africa. It is the second-most populous nation in Africa, with over 82 million inhabitants, and the tenth-largest by area, occupying 1,100,000 km2...
n emperor
Emperor of Ethiopia
The Emperor of Ethiopia was the hereditary ruler of Ethiopia until the abolition of the monarchy in 1974. The Emperor was the head of state and head of government, with ultimate executive, judicial and legislative power in that country...
Menelik II
Menelek II of Ethiopia
Emperor Menelik II GCB, GCMG, baptized as Sahle Maryam , was Negus of Shewa , then of Ethiopia from 1889 to his death. At the height of his internal power and external prestige, the process of territorial expansion and creation of the modern empire-state had been completed by 1898...
's repudiation of the Treaty of Wuchale
Treaty of Wuchale
Treaty of Wuchale was a treaty signed by King Menelik II of Shewa, later the Emperor of Ethiopia with Count Pietro Antonelli of Italy in the town of Wuchale, Ethiopia, on 2 May 1889...
, Italy launched an invasion of the Ethiopian empire. Returning briefly to Italy, Baratieri promised crowds to bring back Menelik in a cage and in late 1895 Baratieri led a force of 20,000 men into Ethiopia.

However, Menelik had spent several years re-equipping his soldiers with modern arms and ammunition for such a conflict -- at times with Italian help -- and called up an army that vastly outnumbered the Italian forces. Baratieri spent nearly a year of the First Italo–Ethiopian War evading a decisive confrontation. In February 1896, however, the impatient Italian government of Francesco Crispi
Francesco Crispi
Francesco Crispi was a 19th-century Italian politician of Arbëreshë ancestry. He was instrumental in the unification of Italy and was its 17th and 20th Prime Minister from 1887 until 1891 and again from 1893 until 1896.-Sicily:Crispi’s paternal family came originally from the small agricultural...
ordered Baratieri to engage the Ethiopians.

On February 29, Baratieri marched on the Ethiopians at Adowa
Battle of Adowa
The Battle of Adwa was fought on 1 March 1896 between Ethiopia and Italy near the town of Adwa, Ethiopia, in Tigray...
, where they outnumbered his command of 17,700 men over six to one. The fighting began soon after 5:30 am on the morning of 1 March, when a horseman entered the camp with news of the Italian advance. By noon the battle was effectively over.

Though the two sides suffered nearly equal casualties--11,000 Italian dead and 10,000 Ethiopian--they accounted for nearly the whole of Baratieri's force. As a result of the disaster, Italy was forced to sign the Treaty of Addis Ababa
Treaty of Addis Ababa
The Treaty of Addis Ababa, signed 23 October 1896, formally ended the First Italo–Ethiopian War on terms mostly favorable to Ethiopia. This treaty superseded a secret agreement between Ethiopia and Italy negotiated days after the decisive Battle of Adowa in March of the same year, in which...
guaranteeing Ethiopian sovereignty. Baratieri was court-martialed at Asmara
Asmara
Asmara is the capital city and largest settlement in Eritrea, home to a population of around 579,000 people...
; though he was acquitted, he was forced to resign his post the following year. He spent the remainder of his life living in retirement in the Austrian Tyrol until his death on August 7, 1901 at Sterzing
Sterzing
Sterzing is a comune in South Tyrol in the region of Trentino-Alto Adige/Südtirol, Italy. It is the main village of the southern Wipptal, and the Eisack River flows through the medieval town.-Origin:...
.
The source of this article is wikipedia, the free encyclopedia.  The text of this article is licensed under the GFDL.