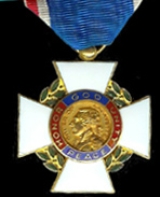 Encyclopedia
The Order of Lafayette is a patriotic, hereditary, nonpartisan, and fraternal organization established in New York City
New York City
New York is the most populous city in the United States and the center of the New York Metropolitan Area, one of the most populous metropolitan areas in the world. New York exerts a significant impact upon global commerce, finance, media, art, fashion, research, technology, education, and...
in 1958 by Colonel Hamilton Fish III
Hamilton Fish III
Hamilton Fish III was a soldier and politician from New York State...
(1888-1991), a former Congressman from New York and decorated veteran
Veteran
A veteran is a person who has had long service or experience in a particular occupation or field; " A veteran of ..."...
of the First World War. The Order's patron is the Marquis de Lafayette, the French officer who was commissioned a general in the Continental Army, and who served with George Washington
George Washington
George Washington was the dominant military and political leader of the new United States of America from 1775 to 1799. He led the American victory over Great Britain in the American Revolutionary War as commander-in-chief of the Continental Army from 1775 to 1783, and presided over the writing of...
during the American Revolution
American Revolution
The American Revolution was the political upheaval during the last half of the 18th century in which thirteen colonies in North America joined together to break free from the British Empire, combining to become the United States of America...
. The Order's principles are "God, Unity, Peace, Honor."

American enlisted men who served in France or in French possessions during World War I or World War II, and who were commissioned later are also eligible for membership in the Order of Lafayette, as well as commissioned officers and non-commissioned officers of the French Foreign Legion
French Foreign Legion
The French Foreign Legion is a unique military service wing of the French Army established in 1831. The foreign legion was exclusively created for foreign nationals willing to serve in the French Armed Forces...
. Membership in the order is also open to all recipients, regardless of rank, of the Medal of Honor
Medal of Honor
The Medal of Honor is the highest military decoration awarded by the United States government. It is bestowed by the President, in the name of Congress, upon members of the United States Armed Forces who distinguish themselves through "conspicuous gallantry and intrepidity at the risk of his or her...
or the French Medaille Militaire
Médaille militaire
The Médaille militaire is a decoration of the French Republic which was first instituted in 1852.-History:The creator of the médaille was the emperor Napoléon III, who may have taken his inspiration in a medal issued by his father, Louis Bonaparte, King of Holland...
who served in France or French possessions during World War I or World War II, and are admitted as members without having to pay dues to the Order. All lineal descendants, male or female, of original members, or those who would have qualified as original members, are eligible for full membership in the Order on reaching the age of twenty-one years.


Activities of the Order

The Order participates in a number of patriotic activities, such as the annual Armistice Day
Armistice Day
Armistice Day is on 11 November and commemorates the armistice signed between the Allies of World War I and Germany at Compiègne, France, for the cessation of hostilities on the Western Front of World War I, which took effect at eleven o'clock in the morning—the "eleventh hour of the eleventh day...
Memorial Mass at Saint Vincent de Paul's R.C. Church held each November in New York City; the graduation convocation of the United States Military Academy
United States Military Academy
The United States Military Academy at West Point is a four-year coeducational federal service academy located at West Point, New York. The academy sits on scenic high ground overlooking the Hudson River, north of New York City...
at West Point, New York
West Point, New York
West Point is a federal military reservation established by President of the United States Thomas Jefferson in 1802. It is a census-designated place located in Town of Highlands in Orange County, New York, United States. The population was 7,138 at the 2000 census...
, where the Order of Lafayette Award is given to a distinguished graduate; social and cultural gatherings to promote and improve Franco-American relations; the annual "Massing of the Colors" ceremony each autumn, and other events.


Insignia of the Order


Flag of the Order

The flag of the Order of Lafayette was designed by Mr. Kenneth A. Menken. Based on the French Tricolor it incorporates thirteen stars and the Order of Lafayette's insignia in the center. The flag symbolizes France's contributions to the struggle for American independence during the American Revolution, and at the same time, America's defense of freedom on French soil during two conflicts, the First and Second World Wars.