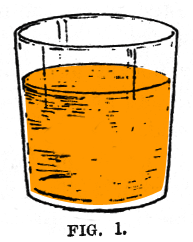 Typically such beverages contain little or no orange juice
Orange juice
Orange juice is a popular beverage made from oranges. It is made by extraction from the fresh fruit, by desiccation and subsequent reconstitution of dried juice, or by concentration of the juice and the subsequent addition of water to the concentrate...
and are mainly composed of water
Water
Water is a chemical substance with the chemical formula H2O. A water molecule contains one oxygen and two hydrogen atoms connected by covalent bonds. Water is a liquid at ambient conditions, but it often co-exists on Earth with its solid state, ice, and gaseous state . Water also exists in a...
, sugar
Sugar
Sugar is a class of edible crystalline carbohydrates, mainly sucrose, lactose, and fructose, characterized by a sweet flavor.Sucrose in its refined form primarily comes from sugar cane and sugar beet...
or sweeteners, flavor, coloring, and additives, sometimes in that order. As such, they are very low in nutrition
Nutrition
Nutrition is the provision, to cells and organisms, of the materials necessary to support life. Many common health problems can be prevented or alleviated with a healthy diet....
al value, although many are fortified with vitamin C and In 2002, however, a "cheap, fortified, orange-flavored drink" was developed with the intention of improving nutrition in the third world
Third World
The term Third World arose during the Cold War to define countries that remained non-aligned with either capitalism and NATO , or communism and the Soviet Union...
by adding Vitamin A
Vitamin A
Vitamin A is a vitamin that is needed by the retina of the eye in the form of a specific metabolite, the light-absorbing molecule retinal, that is necessary for both low-light and color vision...
, Iron
Iron
Iron is a chemical element with the symbol Fe and atomic number 26. It is a metal in the first transition series. It is the most common element forming the planet Earth as a whole, forming much of Earth's outer and inner core. It is the fourth most common element in the Earth's crust...
, and Iodine
Iodine
Iodine is a chemical element with the symbol I and atomic number 53. The name is pronounced , , or . The name is from the , meaning violet or purple, due to the color of elemental iodine vapor....
to people's diets.

Because orange drinks can be confused with orange juice
Orange juice
Orange juice is a popular beverage made from oranges. It is made by extraction from the fresh fruit, by desiccation and subsequent reconstitution of dried juice, or by concentration of the juice and the subsequent addition of water to the concentrate...
, the U.S. government requires orange drinks, as well as other beverages whose names allude to fruit
Fruit
In broad terms, a fruit is a structure of a plant that contains its seeds.The term has different meanings dependent on context. In non-technical usage, such as food preparation, fruit normally means the fleshy seed-associated structures of certain plants that are sweet and edible in the raw state,...
products, to state the percentage of juice
Juice
Juice is the liquid that is naturally contained in fruit or vegetable tissue.Juice is prepared by mechanically squeezing or macerating fruit or vegetable flesh without the application of heat or solvents. For example, orange juice is the liquid extract of the fruit of the orange tree...
contained above the "Nutrition Facts" label. and requires companies to state them as orange drinks instead of orange juice.