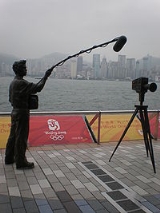 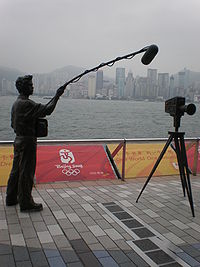 An operator is a professional
Professional
A professional is a person who is paid to undertake a specialised set of tasks and to complete them for a fee. The traditional professions were doctors, lawyers, clergymen, and commissioned military officers. Today, the term is applied to estate agents, surveyors , environmental scientists,...
designation used in various industries, including broadcast
Broadcast
Broadcast or Broadcasting may refer to:* Broadcasting, the transmission of audio and video signals* Broadcast, an individual television program or radio program* Broadcast , an English electronic music band...
ing (in television
Television
Television is a telecommunication medium for transmitting and receiving moving images that can be monochrome or colored, with accompanying sound...
and radio
Radio
Radio is the transmission of signals through free space by modulation of electromagnetic waves with frequencies below those of visible light. Electromagnetic radiation travels by means of oscillating electromagnetic fields that pass through the air and the vacuum of space...
), computing
Computing
Computing is usually defined as the activity of using and improving computer hardware and software. It is the computer-specific part of information technology...
, customer service
Customer service
Customer service is the provision of service to customers before, during and after a purchase.According to Turban et al. , “Customer service is a series of activities designed to enhance the level of customer satisfaction – that is, the feeling that a product or service has met the customer...
, physics
Physics
Physics is a natural science that involves the study of matter and its motion through spacetime, along with related concepts such as energy and force. More broadly, it is the general analysis of nature, conducted in order to understand how the universe behaves.Physics is one of the oldest academic...
, and construction
Construction
In the fields of architecture and civil engineering, construction is a process that consists of the building or assembling of infrastructure. Far from being a single activity, large scale construction is a feat of human multitasking...
. Operators are day-to-day end users of systems, that may or may not be mission-critical, but are typically managed and maintained by technician
Technician
A technician is a worker in a field of technology who is proficient in the relevant skills and techniques, with a relatively practical understanding of the theoretical principles. Experienced technicians in a specific tool domain typically have intermediate understanding of theory and expert...
s or engineer
Engineer
An engineer is a professional practitioner of engineering, concerned with applying scientific knowledge, mathematics and ingenuity to develop solutions for technical problems. Engineers design materials, structures, machines and systems while considering the limitations imposed by practicality,...
s. They might also work on a 24-hour rotating shift
Shift work
Shift work is an employment practice designed to make use of the 24 hours of the clock. The term "shift work" includes both long-term night shifts and work schedules in which employees change or rotate shifts....
schedule.