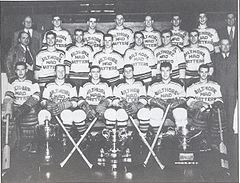 The Guelph Biltmore Mad Hatters were a junior ice hockey
Junior ice hockey
Junior hockey is a catch-all term used to describe various levels of ice hockey competition for players generally between 16 and 20 years of age...
team in the Ontario Hockey Association
Ontario Hockey League
The Ontario Hockey League is one of the three Major Junior ice hockey leagues which constitute the Canadian Hockey League. The league is for players aged 15-20.The OHL also operates under the Ontario Hockey Federation of Hockey Canada....
from 1940 to 1942, and 1947 to 1960. The team was often known as the "Biltmores" and sponsored by the Guelph Biltmore Hat Company, and played home games at the Guelph Memorial Gardens
Guelph Memorial Gardens
The Guelph Memorial Gardens was an arena located in Guelph, Ontario. It was originally built in 1948 out of the remnants of a nineteenth-century building that had housed the Royal Winter Fair. The Gardens hosted various hockey teams over the years, including the Guelph Biltmore Mad Hatters, Guelph...
.

The Guelph Biltmore Mad Hatters were a brief note in junior hockey history, but left an impression on the game during 13 years of operation. The team that was sponsored by a local manufacturer in the Royal City would capture a national championship, several provincial titles, and send four men onto the Hockey Hall of Fame.

The team was founded as the Guelph Indians
Guelph Indians
The Guelph Indians were a junior ice hockey team in the Ontario Hockey Association from 1936 to 1940. After four seasons of play, the Guelph Biltmore Hat Company became the team's sponsors, and the team changed names to the Guelph Biltmore Mad Hatters. Guelph's best season was 1937-38, when they...
for the 1936-37 season. After four seasons, the Guelph Biltmore Hat Company became the team's sponsors. After two more seasons of play, the team was put on hiatus for World War II
World War II
World War II, or the Second World War , was a global conflict lasting from 1939 to 1945, involving most of the world's nations—including all of the great powers—eventually forming two opposing military alliances: the Allies and the Axis...
. The team was resurrected in 1947 as a farm team for the New York Rangers
New York Rangers
The New York Rangers are a professional ice hockey team based in the borough of Manhattan in New York, New York, USA. They are members of the Atlantic Division of the Eastern Conference of the National Hockey League . Playing their home games at Madison Square Garden, the Rangers are one of the...
of the NHL and coached by former Rangers forward Alf Pike until the end of 1954. Eddie Bush
Eddie Bush
Edward Webster Bush was a Canadian professional ice hockey defenceman who played two seasons in the National Hockey League for the Detroit Red Wings, and who coached for one season in the National Hockey League for the Kansas City Scouts.-External links:...
, a former NHL defencman would take over the coaching duties from 1954 onwards.

The Biltmore Hat Company rewarded any player scoring three of more goals in one game the choice of hats at their factory, bringing new meaning to the term "hat trick." Some sources credit this as the origin of the term. http://www.funtrivia.com/ask.cfm?action=details&qnid=46526

After running into financial trouble in 1960, new ownership renamed the team the Guelph Royals
Guelph Royals (hockey)
The Guelph Royals were a junior ice hockey team in the Ontario Hockey Association from 1960 to 1963. The team was based in Guelph, Ontario, Canada and played home games at the Guelph Memorial Gardens. They were affiliated with the NHL New York Rangers...
, after the city's nickname. Three years later the team moved becoming the Kitchener Rangers, taking the name of the parent club from the NHL.

The Mad Hatters won the Memorial Cup
Memorial Cup
The Memorial Cup is a junior ice hockey club championship trophy awarded annually to the Canadian Hockey League champion. It is awarded following a four-team, round robin tournament between a host team and the champions of the CHL's three member leagues: the Ontario Hockey League , Quebec Major...
in 1952 as national junior ice hockey champions of Canada
Canada
Canada is a North American country consisting of ten provinces and three territories. Located in the northern part of the continent, it extends from the Atlantic Ocean in the east to the Pacific Ocean in the west, and northward into the Arctic Ocean...
, and the George Richardson Memorial Trophy
George Richardson Memorial Trophy
The George T. Richardson Memorial Trophy was presented annually from 1932 until 1972 by the Canadian Amateur Hockey Association to the Eastern Canadian Junior "A" Champions. The trophy is named in honour of George T. Richardson, an Allan Cup winner with Queen’s University in 1909...
as eastern Canadian champions the same year. Guelph won the J. Ross Robertson Cup
J. Ross Robertson Cup
The J. Ross Robertson Cup is an ice hockey trophy awarded annually to the winner of the Ontario Hockey League playoff championship. It was presented by and named for John Ross Robertson, the president of the Ontario Hockey Association who served from 1899 to 1905.Originally it was awarded to the...
three times as OHA champions.

Guelph that year broke the OHA record for single season scoring with 341 goals in a 54 game schedule, which was 34 goals more than the previous mark. Ken Laufman set on OHA record at the time with 139 points. Guelph defeated the Montreal Junior Canadiens in a six game series for the Eastern Canadian final.

The Mad Hatters won the first game on home ice at the Guelph Memorial Gardens by a score of 8 to 2. The rest of the series would be played at Maple Leaf Gardens
Maple Leaf Gardens
Maple Leaf Gardens is an indoor arena that was converted into a Loblawssupermarket and Ryerson University athletic centre in Toronto, on the northwest corner of Carlton Street and Church Street in Toronto's Garden District.One of the temples of hockey, it was home to the Toronto Maple Leafs of the...
in Toronto. Guelph won the next two games 4 to 2 and 8 to 2. The Biltmores completed the series sweep in game four posting a 10 to 2 triumph to win the Memorial Cup.

Four alumni of the Mad Hatters would be inducted into the Hockey Hall of Fame
Hockey Hall of Fame
The Hockey Hall of Fame is located in Toronto, Ontario, Canada. Dedicated to the history of ice hockey, it is both a museum and a hall of fame. It holds exhibits about players, teams, National Hockey League records, memorabilia and NHL trophies, including the Stanley Cup...
. They are Andy Bathgate
Andy Bathgate
Andrew James Bathgate is a retired Canadian professional ice hockey centre who played 17 seasons in the National Hockey League for the New York Rangers, Toronto Maple Leafs, Detroit Red Wings and Pittsburgh Penguins.-Playing career:...
, Rod Gilbert
Rod Gilbert
Rodrigue Gabriel Gilbert is a retired Canadian professional ice hockey forward who played for the New York Rangers in the National Hockey League. He played right wing on the GAG line that also featured Vic Hadfield and Jean Ratelle...
, Harry Howell
Harry Howell (hockey player)
Henry Vernon Howell is a former professional hockey player and longtime star for the New York Rangers of the National Hockey League...
and Jean Ratelle
Jean Ratelle
Joseph Gilbert Yvon "Jean" Ratelle is a former Canadian ice hockey player and a member of the Hockey Hall of Fame. It has often been said of Jean Ratelle that he was so consistently effective at a high level of play day in and day out that he has been overlooked by some as one of the greatest to...
. Players who also had impressive NHL careers are Dean Prentice
Dean Prentice
Dean Sutherland Prentice is a retired professional ice hockey left winger who played in the National Hockey League for 22 seasons between 1952–53 and 1973–74...
and Ron Murphy
Ron Murphy
Robert Ronald Murphy is a retired former professional ice hockey player who played for the New York Rangers, Chicago Black Hawks, Detroit Red Wings and Boston Bruins over the course of an 889-game NHL career....
with the New York Rangers.