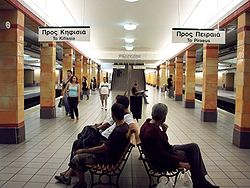 Omonoia station is a subway
Athens Metro
The Athens Metro is an underground rapid transit system serving Athens, the capital city of Greece. It was constructed and owned by Attiko Metro S.A. and operated until 2011 by Attiko Metro Etaireia Leitourgias S.A....
station in Omonoia square
Omonoia Square
Omonoia Square is a central square in Athens. It marks the northern corner of the downtown area defined by the city plans of the 19th century, and is one of the city's principal traffic hubs...
of Athens
Athens
Athens , is the capital and largest city of Greece. Athens dominates the Attica region and is one of the world's oldest cities, as its recorded history spans around 3,400 years. Classical Athens was a powerful city-state...
used by Attiko Metro and ISAP
ISAP
I.S.A.P. is the acronym for the Athens-Piraeus Electric Railways , the oldest urban rapid transit system of Athens metropolitan area in Greece. It is the second-oldest underground metro system in the world, after the Metropolitan Railway, of 1863, now a part of the London Underground...
.

The first station opened 1895 but had been completely redesigned until 1930 as a Metro station. In 2000 the additional platforms for Line 2 was opened.
The source of this article is wikipedia, the free encyclopedia.  The text of this article is licensed under the GFDL.