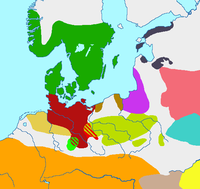 The Oksywie culture is named after the village Oksywie
Oksywie
Oksywie is a neighbourhood of the city of Gdynia, Pomeranian Voivodeship, northern Poland. Formerly a separate settlement, it is actually several centuries older than the city it is a part of currently.-Etymology:...
, now part of the city of Gdynia
Gdynia
Gdynia is a city in the Pomeranian Voivodeship of Poland and an important seaport of Gdańsk Bay on the south coast of the Baltic Sea.Located in Kashubia in Eastern Pomerania, Gdynia is part of a conurbation with the spa town of Sopot, the city of Gdańsk and suburban communities, which together...
in northern Poland
Poland
Poland , officially the Republic of Poland , is a country in Central Europe bordered by Germany to the west; the Czech Republic and Slovakia to the south; Ukraine, Belarus and Lithuania to the east; and the Baltic Sea and Kaliningrad Oblast, a Russian exclave, to the north...
, where the first archaeological finds typical of this culture were discovered.

Archaeological research of last decades near Pomerania
Pomerania
Pomerania is a historical region on the south shore of the Baltic Sea. Divided between Germany and Poland, it stretches roughly from the Recknitz River near Stralsund in the West, via the Oder River delta near Szczecin, to the mouth of the Vistula River near Gdańsk in the East...
in Poland
Poland
Poland , officially the Republic of Poland , is a country in Central Europe bordered by Germany to the west; the Czech Republic and Slovakia to the south; Ukraine, Belarus and Lithuania to the east; and the Baltic Sea and Kaliningrad Oblast, a Russian exclave, to the north...
suggests the transition of Oksywie culture into Wielbark culture. Its timing coincides with the appearance of new population of Scandinavians
Scandinavians
Scandinavians are a group of Germanic peoples, inhabiting Scandinavia and to a lesser extent countries associated with Scandinavia, and speaking Scandinavian languages. The group includes Danes, Norwegians and Swedes, and additionally the descendants of Scandinavian settlers such as the Icelandic...
in a previously uninhabited area ("no man's land
No man's land
No man's land is a term for land that is unoccupied or is under dispute between parties that leave it unoccupied due to fear or uncertainty. The term was originally used to define a contested territory or a dumping ground for refuse between fiefdoms...
") between the Oksywie and Przeworsk culture
Przeworsk culture
The Przeworsk culture is part of an Iron Age archaeological complex that dates from the 2nd century BC to the 5th century AD. It was located in what is now central and southern Poland, later spreading to parts of eastern Slovakia and Carpathian Ruthenia ranging between the Oder and the middle and...
areas. It appears likely that the new population which appeared on southern coast of the Baltic
Baltic Sea
The Baltic Sea is a brackish mediterranean sea located in Northern Europe, from 53°N to 66°N latitude and from 20°E to 26°E longitude. It is bounded by the Scandinavian Peninsula, the mainland of Europe, and the Danish islands. It drains into the Kattegat by way of the Øresund, the Great Belt and...
in the early 1st century AD catalyzed the transformation of Oksywie culture into Wielbark culture and can be identified with the Berig party described by Jordanes. The area where they settled suggests that those northmen of Berig could have been invited to settle as a buffer bulwark to defend the tribes known as Oksywie culture against their southern (probably Vandal) neighbors.