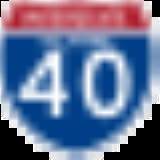 Encyclopedia
The Oklahoma City Crosstown is an elevated four mile (6 km) stretch of Interstate 40 that dissects downtown Oklahoma City
Oklahoma city
Oklahoma City is the capital and largest city of the U.S. state of Oklahoma.Oklahoma City may also refer to:*Oklahoma City metropolitan area*Downtown Oklahoma City*Uptown Oklahoma City*Oklahoma City bombing*Oklahoma City National Memorial...
from Agnew Avenue to Byers Avenue. It is owned and maintained by the Oklahoma Department of Transportation
Oklahoma Department of Transportation
The Oklahoma Department of Transportation is an agency of the government of Oklahoma responsible for the construction, maintenance, and regulation the use of the state's transportation infrastructure...
(ODOT). It is the primary east–west artery through Oklahoma City, and serves an unofficial dividing line between north and south Oklahoma City (the official dividing line for address purposes is [Reno Avenue]). While the Crosstown designed to withstand about 76,000 vehicles a day, it is currently used by nearly 120,000 vehicles a day. The Crosstown was completed in the 1960s using an engineering process commonly termed as "fracture critical", a process that has not been used since the 1970s because it does not provide redundancies
Redundancy (engineering)
In engineering, redundancy is the duplication of critical components or functions of a system with the intention of increasing reliability of the system, usually in the case of a backup or fail-safe....
. According to Brian Windsor, an ODOT structural engineer, without redundant support, the failure of a single beam creates the risk of total collapse of that section of bridge. The entire stretch of the Crosstown is elevated, and at some points, the elevation is as much as 50 feet (15.2 m). Other safety problems of the existing Crosstown include falling chunks of concrete and a lack of shoulder
Shoulder
The human shoulder is made up of three bones: the clavicle , the scapula , and the humerus as well as associated muscles, ligaments and tendons. The articulations between the bones of the shoulder make up the shoulder joints. The major joint of the shoulder is the glenohumeral joint, which...
s or breakdown lanes. In an August 2007 poll sponsored by The Oklahoman
The Oklahoman
The Oklahoman is the largest daily newspaper in Oklahoma and is the only daily newspaper that covers the entire Oklahoma City area.-Ownership:...
, nearly ⅔ of respondents indicated that they were "afraid to drive across the Crosstown bridge in Oklahoma City".

Constructed nearly fifty years ago, Interstate 40 (I-40) stretches from Wilmington, North Carolina
Wilmington, North Carolina
Wilmington is a port city in and is the county seat of New Hanover County, North Carolina, United States. The population is 106,476 according to the 2010 Census, making it the eighth most populous city in the state of North Carolina...
to Barstow, California
Barstow, California
Barstow is a city in San Bernardino County, California, United States. The population was 22,639 at the 2010 census, up from 21,119 at the 2000 census. Barstow is located north of San Bernardino....
. The highway roughly traces the path of historical U.S. Route 66
U.S. Route 66
U.S. Route 66 was a highway within the U.S. Highway System. One of the original U.S. highways, Route 66 was established on November 11, 1926 -- with road signs erected the following year...
west of Oklahoma City.

The Oklahoma City Crosstown is the busiest of Oklahoma's many aging bridges. According to a 2006 report, Oklahoma leads the nation with 6,299 "structurally deficient" bridges. Attention to the Crosstown project increased after the collapse of a stretch of I-35 in Minneapolis, Minnesota on August 1, 2007. At that time, ODOT released a statement indicating that the condition of the Crosstown was "deteriorating", but that it "remained safe." Concerns about whether the Crosstown will last until its 2012 replacement date increased on September 23, 2007, when a hole in the Crosstown resulted in closure of all but one lane and created significant traffic delays.

In May 2002, federal funding was secured to finance replacement of the Oklahoma City Crosstown. Rather than replace the existing structure, a new stretch of I-40 will be constructed about five block
City block
A city block, urban block or simply block is a central element of urban planning and urban design. A city block is the smallest area that is surrounded by streets. City blocks are the space for buildings within the street pattern of a city, they form the basic unit of a city's urban fabric...
s south of the current location. Initial estimates of the Crosstown replacement project were that the project would take 8 years with a completion date of 2010, and would cost $360 million dollars. The most recent revision to this estimate was released in July 2007, and indicated that the project will be completed in 2012 and will cost $557 million. The ground-level boulevard to replace the current Crosstown bridges is no longer included in the cost estimates. The new Crosstown will have ten lanes for traffic traveling at 70 mi/h, despite the current speed limit of 60 mph. It is being designed to carry 170,000 vehicles per day, and will have shoulders for disabled vehicles. Over 95% of current traffic on the Crosstown is through traffic, not transferring to or from downtown streets.

More recently, the Crosstown project has come under serious controversy. In an era of fluctuating energy prices and changing circumstances, several citizen's groups are challenging the project. Devon Energy
Devon Energy
Devon Energy Corporation , is among the largest U.S.-based independent natural gas and oil producers. Based in Oklahoma City, Oklahoma, the company's operations are focused on North American onshore exploration and production...
announced in March 2008 it would construct a one million square foot office tower in the center of a revitalized downtown to house between 2,000 and 3,000 of its employees. The Devon location will be ten blocks away from the interstate instead of four blocks, resulting in increased congestion on slower downtown streets during rush hour. Under current construction plans, part of Oklahoma City's Union Station railyard would be sacrificed to make space for the freeway, leading to concerns that this would disable the station from use in future light rail, commuter rail or traffic circulation use. An unprecedented ruling in June 2008 by the Federal Surface Transportation Board held that the BNSF railway made fraudulent representations in their request for abandonment of the freight line that would enable the Crosstown, and denied the abandonment. However, in May 2009 the final decision from the STB reversed the earlier ruling, allowing the ODOT to move ahead with their plans.

ODOT has not sought to redirect semitrailers off the existing I-40 stretch of deteriorating overpasses. ODOT Director Gary Ridley said the current I-40 will "absolutely" survive through 2012, the new completion target date for the realignment, adding, "If we felt there was anything wrong that would cause us concern, we would close it, and we wouldn't think twice about it." However, in a filing with STB, Ridley urged a quick ruling because "new serious issues including cracks in fracture critical members are constantly being discovered and repaired. The condition and obsolescence of the existing bridges constitutes serious concern for the Department." Other highway connections, running east and west, include I-240 and I-44.

Under the original Environmental Impact Statement, residents of two neighborhoods were to be displaced by construction of the new Crosstown Expressway. Construction resulted in the demolition of 165 properties in the Walnut Grove and Riverside neighborhoods. The realignment will now directly result in reconstruction of 590 acres (2.4 km²) in Phase I and an additional 785 acres (3.2 km²) in Phase II, for a total of 1375 acres (5.6 km²) in the core of Oklahoma City.


Future land use (Core To Shore)

After the completion of the new I-40 Crosstown, the existing bridge will be demolished. While ODOT is responsible for the relocation of the I-40 Crosstown and the subsequent demolition of the existing structure, the city of Oklahoma City will take the lead in determining the future use of the land currently occupied by the existing crosstown. On June 20, 2006, the Oklahoma City Council announced a $387,000 contract for professional consulting services with the URS Corporation
URS Corp.
URS Corporation is an engineering design firm and a U.S. federal government contractor. Headquartered in San Francisco, California, URS is a full-service, global organization with offices located in the Americas, Europe and Asia-Pacific.-History:...
to "to recommend specific actions to facilitate redevelopment within the area impacted by the relocation of the downtown section of I-40, Reno Avenue, new I-40 alignment, Western Avenue and I-35/I-235"

On October 5, 2006, Oklahoma City Mayor Mick Cornett
Mick Cornett
Mick Cornett is the current Mayor of Oklahoma City, Oklahoma, United States. He also serves on notable positions including the national President of the Republican Mayors and Local Officials , and also serves on the Board of Trustees for the U.S. Conference of Mayors. He was also Chairman of the...
introduced the 'Core to Shore' project team which has the task of "planning and developing the area south of downtown and north of the Oklahoma River where Interstate 40 currently runs." This team consists of community leaders as well as representatives from URS Corp.