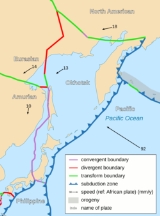 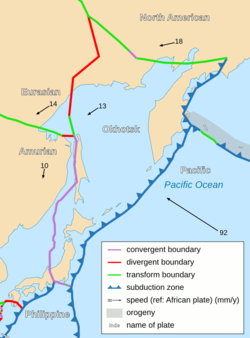 The Okhotsk Plate is a tectonic plate covering the Sea of Okhotsk
Sea of Okhotsk
The Sea of Okhotsk is a marginal sea of the western Pacific Ocean, lying between the Kamchatka Peninsula on the east, the Kuril Islands on the southeast, the island of Hokkaidō to the far south, the island of Sakhalin along the west, and a long stretch of eastern Siberian coast along the west and...
, the Kamchatka Peninsula
Kamchatka Peninsula
The Kamchatka Peninsula is a peninsula in the Russian Far East, with an area of . It lies between the Pacific Ocean to the east and the Sea of Okhotsk to the west...
, Sakhalin Island and Tōhoku and Hokkaidō
Hokkaido
, formerly known as Ezo, Yezo, Yeso, or Yesso, is Japan's second largest island; it is also the largest and northernmost of Japan's 47 prefectural-level subdivisions. The Tsugaru Strait separates Hokkaido from Honshu, although the two islands are connected by the underwater railway Seikan Tunnel...
in Japan
Japan
Japan is an island nation in East Asia. Located in the Pacific Ocean, it lies to the east of the Sea of Japan, China, North Korea, South Korea and Russia, stretching from the Sea of Okhotsk in the north to the East China Sea and Taiwan in the south...
. It was formerly considered a part of the North American Plate
North American Plate
The North American Plate is a tectonic plate covering most of North America, Greenland, Cuba, Bahamas, and parts of Siberia, Japan and Iceland. It extends eastward to the Mid-Atlantic Ridge and westward to the Chersky Range in eastern Siberia. The plate includes both continental and oceanic crust...
, but recent studies indicate that it is an independent plate, bounded on the north by the North American Plate. The boundary is a left-lateral
Sinistral
Sinistral and dextral are scientific terms that describe chirality or relative direction in a number of disciplines.The terms are derived from the Latin words for “left” and “right” ....
moving transform fault
Transform fault
A transform fault or transform boundary, also known as conservative plate boundary since these faults neither create nor destroy lithosphere, is a type of fault whose relative motion is predominantly horizontal in either sinistral or dextral direction. Furthermore, transform faults end abruptly...
, the Ulakhan Fault
Ulakhan Fault
The Ulakhan Fault is a left-lateral moving transform fault which runs along the boundary between two tectonic plates in northeast Asia, the North American Plate, and the Okhotsk Plate. It runs from a triple junction in the Chersky Range in the west, to another triple junction with the Aleutian...
. On the east, the plate is bounded by the Pacific Plate
Pacific Plate
The Pacific Plate is an oceanic tectonic plate that lies beneath the Pacific Ocean. At 103 million square kilometres, it is the largest tectonic plate....
at the Kuril-Kamchatka Trench
Kuril-Kamchatka Trench
The Kuril–Kamchatka Trench or Kuril Trench is an oceanic trench in the northwest Pacific Ocean. It lies off the southeast coast of Kamchatka and parallels the Kuril Island chain to meet the Japan Trench east of Hokkaido...
and the Japan Trench
Japan Trench
__notoc__The Japan Trench is an oceanic trench, a part of the Pacific Ring of Fire, in the floor of the northern Pacific Ocean off northeast Japan. It extends from the Kuril Islands to the Bonin Islands and is at its deepest. It is an extension of the Kuril-Kamchatka Trench to the north and the...
, on the south by the Philippine Sea Plate at the Nankai Trough
Nankai Trough
The Nankai Trough is a submarine trough located south of Japan's island of Honshū, extending approximately 900 km offshore. In plate tectonics, the Nankai Trough marks a subduction zone that is caused by subduction of the Philippine Sea Plate beneath Japan, part of the Eurasian plate...
, on the west by the Eurasian Plate
Eurasian Plate
The Eurasian Plate is a tectonic plate which includes most of the continent of Eurasia , with the notable exceptions of the Indian subcontinent, the Arabian subcontinent, and the area east of the Chersky Range in East Siberia...
, and possibly on the southwest by the Amurian Plate
Amurian Plate
The Amurian Plate is a proposed continental tectonic plate covering Manchuria, the Korean Peninsula, Western Japan, and Primorsky Krai...
.

The boundary between Okhotsk Plate and Amurian Plate might be responsible for many strong earthquakes that occurred in the Sea of Japan
Sea of Japan
The Sea of Japan is a marginal sea of the western Pacific Ocean, between the Asian mainland, the Japanese archipelago and Sakhalin. It is bordered by Japan, North Korea, Russia and South Korea. Like the Mediterranean Sea, it has almost no tides due to its nearly complete enclosure from the Pacific...
as well as in the Sakhalin
Sakhalin
Sakhalin or Saghalien, is a large island in the North Pacific, lying between 45°50' and 54°24' N.It is part of Russia, and is Russia's largest island, and is administered as part of Sakhalin Oblast...
island, such as the MW
Moment magnitude scale
The moment magnitude scale is used by seismologists to measure the size of earthquakes in terms of the energy released. The magnitude is based on the seismic moment of the earthquake, which is equal to the rigidity of the Earth multiplied by the average amount of slip on the fault and the size of...
7.1 (MS
Surface wave magnitude
The surface wave magnitude scale is one of the magnitude scales used in seismology to describe the size of an earthquake. It is based on measurements in Rayleigh surface waves that travel primarily along the uppermost layers of the earth...
7.5 according to other sources) earthquake of May 27, 1995
1995 Neftegorsk earthquake
The 1995 Neftegorsk earthquake was a 7.1Mw earthquake that devastated the town of Neftegorsk in northern Sakhalin Island, Russia on May 27 1995 at 23:03 local time ....
in northern Sakhalin. The earthquake devastated Neftegorsk
Neftegorsk, Sakhalin Oblast
Neftegorsk , called Vostok before 1970, was an oil-producing urban-type settlement in Sakhalin Oblast, Russia. It was devastated on May 28, 1995 by an earthquake measuring 7.6 on the Richter scale, killing over 2,000 people...
, and the town was not rebuilt after the earthquake.

The boundary between Okhotsk Plate and Pacific Plate is a subduction zone, where Pacific Plate subducts beneath the Okhotsk Plate. Many strong megathrust earthquake
Megathrust earthquake
Megathrust earthquakes occur at subduction zones at destructive plate boundaries , where one tectonic plate is forced under another. Due to the shallow dip of the plate boundary, which causes large sections to get stuck, these earthquakes are among the world's largest, with moment magnitudes ...
s occurred here, some of them among the largest on world record, including the Kamchatka earthquakes
Kamchatka earthquakes
3 earthquakes, which occurred off the coast of Kamchatka Peninsula in far eastern Russia in 1737, 1923 and 1952, were megathrust earthquakes and caused tsunamis. They occurred where the Pacific Plate subducts under the Okhotsk Plate at the Kuril-Kamchatka Trench. The depth of the trench at the...
of 1737 (estimated M9.0~9.3) and 1952 (M9.0). Such strong megathrust earthquakes can also occur near the Kuril Islands
Kuril Islands
The Kuril Islands , in Russia's Sakhalin Oblast region, form a volcanic archipelago that stretches approximately northeast from Hokkaidō, Japan, to Kamchatka, Russia, separating the Sea of Okhotsk from the North Pacific Ocean. There are 56 islands and many more minor rocks. It consists of Greater...
, as the M8.3 earthquake of November 15, 2006, Hokkaido
Hokkaido
, formerly known as Ezo, Yezo, Yeso, or Yesso, is Japan's second largest island; it is also the largest and northernmost of Japan's 47 prefectural-level subdivisions. The Tsugaru Strait separates Hokkaido from Honshu, although the two islands are connected by the underwater railway Seikan Tunnel...
, as the M8.3 earthquake of September 26, 2003 and the M9.0 2011 Tōhoku earthquake
2011 Tōhoku earthquake and tsunami
The 2011 earthquake off the Pacific coast of Tohoku, also known as the 2011 Tohoku earthquake, or the Great East Japan Earthquake, was a magnitude 9.0 undersea megathrust earthquake off the coast of Japan that occurred at 14:46 JST on Friday, 11 March 2011, with the epicenter approximately east...
off the coast of Honshu
Honshu
is the largest island of Japan. The nation's main island, it is south of Hokkaido across the Tsugaru Strait, north of Shikoku across the Inland Sea, and northeast of Kyushu across the Kanmon Strait...
.

GPS measurements and other studies show that the Okhotsk Plate is slowly rotating in a clockwise direction. Models indicate that it rotates 0.2 deg/Myr about a pole located north of Sakhalin
Sakhalin
Sakhalin or Saghalien, is a large island in the North Pacific, lying between 45°50' and 54°24' N.It is part of Russia, and is Russia's largest island, and is administered as part of Sakhalin Oblast...
.