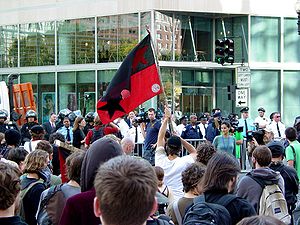 October Rebellion was the collective name for the series of protest
Protest
A protest is an expression of objection, by words or by actions, to particular events, policies or situations. Protests can take many different forms, from individual statements to mass demonstrations...
events surrounding the fall 2007 meetings of the World Bank
World Bank
The World Bank is an international financial institution that provides loans to developing countries for capital programmes.The World Bank's official goal is the reduction of poverty...
and International Monetary Fund
International Monetary Fund
The International Monetary Fund is an organization of 187 countries, working to foster global monetary cooperation, secure financial stability, facilitate international trade, promote high employment and sustainable economic growth, and reduce poverty around the world...
on October 19 – 20, 2007, in Washington, D.C.
Washington, D.C.
Washington, D.C., formally the District of Columbia and commonly referred to as Washington, "the District", or simply D.C., is the capital of the United States. On July 16, 1790, the United States Congress approved the creation of a permanent national capital as permitted by the U.S. Constitution....
, United States. The events were organized by the October Coalition. According to the October Coalition's call to action, the group demanded an end to all third world debt
Developing countries' debt
The debt of developing countries is external debt incurred by governments of developing countries, generally in quantities beyond the governments' political ability to repay...
using the financial institutions' own resources, the end to structural adjustment policies believed to prioritize profit over the lives of individuals, and an end to social and environmental issues caused by oil and gas production, mining, and certain kinds of infrastructure development.


Demonstration at Immigration and Customs Enforcement

The October Coalition called for "disruptive actions throughout Georgetown
Georgetown, Washington, D.C.
Georgetown is a neighborhood located in northwest Washington, D.C., situated along the Potomac River. Founded in 1751, the port of Georgetown predated the establishment of the federal district and the City of Washington by 40 years...
," in a march starting at 9:00 PM on October 19 from Washington Circle
Washington Circle
Washington Circle is a traffic circle in the Northwest quadrant of Washington, D.C., United States. It is the intersection of 23rd Street, K Street, New Hampshire Avenue, and Pennsylvania Avenue, N.W., on the border of the Foggy Bottom and West End neighborhoods. The through lanes of K Street...
in Foggy Bottom
Foggy Bottom
Foggy Bottom is one of the oldest late 18th and 19th-century neighborhoods in Washington, D.C. The area is thought to have received the name because its riverside location made it susceptible to concentrations of fog and industrial smoke, an atmospheric trait that did not prevent the neighborhood...
. In explaining their selection of Georgetown for a march, organizers stated on their Web site, "Georgetown, Washington's seat of power, is a playground for the rich. Its residents possess enormous wealth at the expense of the poor majority who live so close to them. They live so close, yet a world away, hidden in plain sight. Georgetown embodies neoliberalism. Georgetown is neoliberalism." A demonstrator at the event described the reason for going to Georgetown as being where the delegates were staying. Prior to the march, the organizers did not outline what specific actions would be taken, nor did they indicate whether or not the group would carry weapons, but encouraged participants to use "creativity" and a "diversity of tactics". According to The Hoya
The Hoya
The Hoya, the oldest and largest student newspaper of Georgetown University in Washington, DC, was founded in 1920. The Hoya prints an edition every Tuesday and Friday during the academic year and has a circulation of 6,500...
, it was suggested that 30th and M Streets
M Street (Washington, D.C.)
The name "M Street" refers to two major roads in the United States capital of Washington, D.C. Because of the Cartesian-coordinate-based street-naming system in Washington, the name M Street can be used to refer to any east-west street located twelve blocks north or south of the dome of the United...
NW would be a preliminary destination.

At the appointed time, an estimated 200 to 300 demonstrators, many wearing the black clothing and mask
Mask
A mask is an article normally worn on the face, typically for protection, disguise, performance or entertainment. Masks have been used since antiquity for both ceremonial and practical purposes...
s characteristic of a black bloc
Black bloc
A black bloc is a tactic for protests and marches, whereby individuals wear black clothing, scarves, ski masks, motorcycle helmets with padding, or other face-concealing items...
, gathered at Washington Circle before departing with a heavy police escort for Georgetown, via Pennsylvania Avenue
Pennsylvania Avenue
Pennsylvania Avenue is a street in Washington, D.C. that joins the White House and the United States Capitol. Called "America's Main Street", it is the location of official parades and processions, as well as protest marches...
and M Street NW. The march turned north at Wisconsin Avenue
Wisconsin Avenue (Washington, D.C.)
Wisconsin Avenue is a major thoroughfare in Washington, D.C., and its Maryland suburbs. It starts in Georgetown just north of the Potomac River, at an intersection with K Street under the Whitehurst Freeway...
, before reversing course and returning to M Street. Over the course of the march, newspaper boxes were overturned, objects were thrown, and trash cans were knocked over. Many storefronts were boarded in anticipation of the march. Two unboarded windows were broken at the intersection of Wisconsin Avenue and M Street. Two arrests were made, related to an incident where an officer was pushed from a scooter.

The event was marred by an accident involving a female bystander, who was walking with a group of friends when she was struck in the forehead by a brick thrown by a demonstrator. The woman was taken to a nearby hospital for treatment following the incident. The Georgetown march ended at approximately 10:30 PM, when, at 29th and M Streets, police ordered the demonstrators to disperse. Most complied with the order.


March to the World Bank

On October 20, 2007, approximately 500 demonstrators gathered at Franklin Square
Franklin Square (Washington, D.C.)
Franklin Square is a square in downtown Washington, D.C.. Named after Benjamin Franklin, it is bounded by K Street Northwest to the north, 13th Street NW on the east, I Street NW on the south, and 14th Street NW on the west. It is served by the McPherson Square station of the Washington Metro,...
for a rally and march to the World Bank headquarters at 18th and H Street
H Street (Washington, D.C.)
H Street is an east-west street in Washington, D.C.. It is also used as an alternate name for the Near Northeast neighborhood, as H Street is the neighborhood's main commercial strip.-History:...
s. The group consisted of a mix of people, including students, community activists, as well as anarchists dressed for a black bloc
Black bloc
A black bloc is a tactic for protests and marches, whereby individuals wear black clothing, scarves, ski masks, motorcycle helmets with padding, or other face-concealing items...
.

The protest was peaceful, with the exception of an incident in Murrow Park, across the street from the World Bank, where several demonstrators charged the line of police as a group of finance ministers arrived and crossed the police lines for mid-afternoon meetings. Police quickly came in carrying batons and shoving demonstrators, which sent some people running. However, according to Bob Exe, one of the demonstrators, the police line was never charged, but that "some pushing" may have occurred.

Following the scuffle with police, the People's Tribunal began, which consisted of a panel of six judges, and a line-up of people from countries affected by the policies of the World Bank and the IMF speaking.