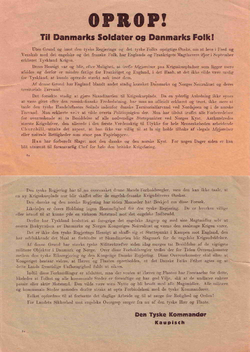 OPROP! was a German
Nazi Germany
Nazi Germany , also known as the Third Reich , but officially called German Reich from 1933 to 1943 and Greater German Reich from 26 June 1943 onward, is the name commonly used to refer to the state of Germany from 1933 to 1945, when it was a totalitarian dictatorship ruled by...
leaflet
Pamphlet
A pamphlet is an unbound booklet . It may consist of a single sheet of paper that is printed on both sides and folded in half, in thirds, or in fourths , or it may consist of a few pages that are folded in half and saddle stapled at the crease to make a simple book...
dropped over several Danish
Denmark
Denmark is a Scandinavian country in Northern Europe. The countries of Denmark and Greenland, as well as the Faroe Islands, constitute the Kingdom of Denmark . It is the southernmost of the Nordic countries, southwest of Sweden and south of Norway, and bordered to the south by Germany. Denmark...
cities in the Battle of Denmark
Battle of Denmark
The Battle of Denmark was the fighting that followed the German army crossing the Danish border on 9 April 1940 by land, sea and air. The German ground campaign against Denmark was the briefest on record in military history.-Motivation for invading Denmark:...
on April 9, 1940. The leaflets were signed by the head of Operation Weserübung Süd
Operation Weserübung
Operation Weserübung was the code name for Germany's assault on Denmark and Norway during the Second World War and the opening operation of the Norwegian Campaign...
, general Leonhard Kaupisch
Leonhard Kaupisch
Leonhard Kaupisch was a German General der Flieger whose military service spanned almost five decades. Kaupisch is most well known for his actions during World War II, primarily as Military Commander of Denmark....
. The text, written in a very broken but understandable Danish mixed with Norwegian, justified the German invasion as fraternally protecting Danish and Norwegian neutrality against British aggression, denounced Winston Churchill
Winston Churchill
Sir Winston Leonard Spencer-Churchill, was a predominantly Conservative British politician and statesman known for his leadership of the United Kingdom during the Second World War. He is widely regarded as one of the greatest wartime leaders of the century and served as Prime Minister twice...
as a warmongerer, and exhorted the Danish populace not to resist the German presence while an arrangement with the Danish government was being negotiated.

Kaupisch later told a Danish journalist that the German text to OPROP! was written by Adolf Hitler
Adolf Hitler
Adolf Hitler was an Austrian-born German politician and the leader of the National Socialist German Workers Party , commonly referred to as the Nazi Party). He was Chancellor of Germany from 1933 to 1945, and head of state from 1934 to 1945...
himself, after he had scrapped a draft which Kaupisch had made. It was also Hitler who arranged for the translation.

The OPROP! leaflet had a notable impact in regards to the Danish capitulation. When the German infantry arrived at the Amalienborg Palace
Amalienborg Palace
Amalienborg Palace is the winter home of the Danish royal family, and is located in Copenhagen, Denmark. It consists of four identical classicizing palace façades with rococo interiors around an octagonal courtyard ; in the centre of the square is a monumental equestrian statue of Amalienborg's...
in the morning of April 9, 1940, they were met with determined opposition from the King's Royal Guard
Den Kongelige Livgarde
The Royal Life Guards is an infantry regiment of the Danish Army, founded in 1658 by King Frederik III. It serves in two roles: as a front line combat unit, and as a guard/ceremonial unit to the Danish monarchy...
, which repulsed back the initial attack, suffering three wounded. This gave Christian X
Christian X of Denmark
Christian X was King of Denmark from 1912 to 1947 and the only King of Iceland between 1918 and 1944....
and his ministers time to confer with the Danish Army chief General William Wain Prior
William Wain Prior
William Wain Prior...
. As the discussions were ongoing, several formations of Heinkel He 111
Heinkel He 111
The Heinkel He 111 was a German aircraft designed by Siegfried and Walter Günter in the early 1930s in violation of the Treaty of Versailles. Often described as a "Wolf in sheep's clothing", it masqueraded as a transport aircraft, but its purpose was to provide the Luftwaffe with a fast medium...
and Dornier 17
Dornier Do 17
The Dornier Do 17, sometimes referred to as the Fliegender Bleistift , was a World War II German light bomber produced by Claudius Dornier's company, Dornier Flugzeugwerke...
bombers roared over the city dropping the OPROP! leaflets. Faced with the explicit threat of the Luftwaffe
Luftwaffe
Luftwaffe is a generic German term for an air force. It is also the official name for two of the four historic German air forces, the Wehrmacht air arm founded in 1935 and disbanded in 1946; and the current Bundeswehr air arm founded in 1956....
bombing the civilian population of Copenhagen
Copenhagen
Copenhagen is the capital and largest city of Denmark, with an urban population of 1,199,224 and a metropolitan population of 1,930,260 . With the completion of the transnational Øresund Bridge in 2000, Copenhagen has become the centre of the increasingly integrating Øresund Region...
, and only General Prior in favour of continuing the fighting, the Danish government capitulated in exchange for retaining political independence in domestic matters.
The source of this article is wikipedia, the free encyclopedia.  The text of this article is licensed under the GFDL.