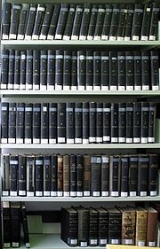 Encyclopedia
The Realencyclopädie der Classischen Altertumswissenschaft, commonly called the Pauly–Wissowa or simply RE, is a German
German language
German is a West Germanic language, related to and classified alongside English and Dutch. With an estimated 90 – 98 million native speakers, German is one of the world's major languages and is the most widely-spoken first language in the European Union....
encyclopedia
Encyclopedia
An encyclopedia is a type of reference work, a compendium holding a summary of information from either all branches of knowledge or a particular branch of knowledge....
of classical
Classical antiquity
Classical antiquity is a broad term for a long period of cultural history centered on the Mediterranean Sea, comprising the interlocking civilizations of ancient Greece and ancient Rome, collectively known as the Greco-Roman world...
scholarship. With its supplements it comprises over eighty volumes. 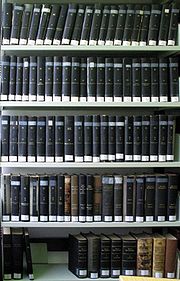 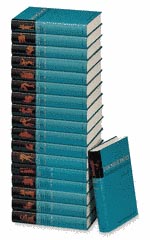 The first volume was published by August Pauly
August Pauly
August Friedrich von Pauly was a teacher who began the first edition of the classical encyclopedia Realencyclopädie der classischen Altertumswissenschaft, whose later editions are commonly known as the Pauly–Wissowa. Pauly died while working on the fourth volume....
in 1839. Pauly died in 1845, his work unfinished; Christian Waltz and Wilhelm Teuffel completed it in 1852. This first edition was six volumes. A second edition was worked on from 1861 and 1866, but never finished.

Each article was written by a recognized specialist in the relevant field, but unsurprisingly for a work spanning three generations, the underlying assumptions vary radically with the age of the article. Many early biographies were written by Friedrich Münzer
Friedrich Münzer
Friedrich Münzer was a German classical scholar noted for the development of prosopography, particularly for his demonstrations of how family relationships in ancient Rome connected to political struggles....
.

The price and size of Pauly–Wissowa have always been daunting, and so between 1964 and 1975 the J. B. Metzler’sche Verlagsbuchhandlung put out Der Kleine Pauly in five volumes.

An updated version called Der Neue Pauly, consisting of 18 volumes (although only 15 volumes were planned) and an index, appeared gradually from 1996 to 2003. Since 2004 supplement volumes also appear (7 are planned). An English edition, Brill’s New Pauly: "Encyclopaedia of the Ancient World", was published in 2006, with a chronological supplement in 2007.

The index to Pauly–Wissowa is available on CD-ROM
CD-ROM
A CD-ROM is a pre-pressed compact disc that contains data accessible to, but not writable by, a computer for data storage and music playback. The 1985 “Yellow Book” standard developed by Sony and Philips adapted the format to hold any form of binary data....
.