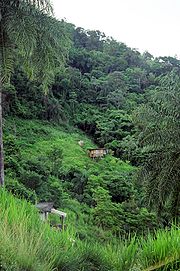 The Northern Range is the range of tall hills across the northern portion of Trinidad
Trinidad
Trinidad is the larger and more populous of the two major islands and numerous landforms which make up the island nation of Trinidad and Tobago. It is the southernmost island in the Caribbean and lies just off the northeastern coast of Venezuela. With an area of it is also the fifth largest in...
, the major island in the Republic of Trinidad and Tobago
Trinidad and Tobago
Trinidad and Tobago officially the Republic of Trinidad and Tobago is an archipelagic state in the southern Caribbean, lying just off the coast of northeastern Venezuela and south of Grenada in the Lesser Antilles...
. The hills rise abruptly from the lowlands of northern Trinidad (the so-called East-West Corridor
East-West Corridor
The East-West Corridor is the built-up area of north Trinidad stretching from the capital, Port of Spain, 15 miles east to Arima. The term was coined by economist and political philosopher Lloyd Best, after gleaning the works of a technocrat named Lynette Attwell. The Corridor includes such towns...
), but only the two tallest peaks, El Cerro del Aripo
El Cerro del Aripo
El Cerro del Aripo, at , is the highest point in the Republic of Trinidad and Tobago. It is part of the Aripo Massif and is located in the Northern Range on the island of Trinidad, northeast of the town of Arima.-References:...
and El Tucuche
El Tucuche
El Tucuche is the second highest peak in Trinidad's northern range and is noted for its interesting plateau shape.Its summit is home to the Trinidad endemic El Tucuche Golden Tree Frog , found only on El Tucuche and on Trinidad's highest peak El Cerro del Aripo...
top 900 m. The south-facing valleys run deep into the hills and support major rivers, while the north-facing valleys are generally short and are drained by smaller streams.

The Northern Range consists mainly of sedimentary rocks - schist
Schist
The schists constitute a group of medium-grade metamorphic rocks, chiefly notable for the preponderance of lamellar minerals such as micas, chlorite, talc, hornblende, graphite, and others. Quartz often occurs in drawn-out grains to such an extent that a particular form called quartz schist is...
s and limestone
Limestone
Limestone is a sedimentary rock composed largely of the minerals calcite and aragonite, which are different crystal forms of calcium carbonate . Many limestones are composed from skeletal fragments of marine organisms such as coral or foraminifera....
s; portions at the eastern end of the range are of volcanic origin. The hills are mostly forested, although deforestation
Deforestation
Deforestation is the removal of a forest or stand of trees where the land is thereafter converted to a nonforest use. Examples of deforestation include conversion of forestland to farms, ranches, or urban use....
and the formation of fire-savanna
Savanna
A savanna, or savannah, is a grassland ecosystem characterized by the trees being sufficiently small or widely spaced so that the canopy does not close. The open canopy allows sufficient light to reach the ground to support an unbroken herbaceous layer consisting primarily of C4 grasses.Some...
hs is one of the major environment
Natural environment
The natural environment encompasses all living and non-living things occurring naturally on Earth or some region thereof. It is an environment that encompasses the interaction of all living species....
al concerns in Trinidad.

The Northern Range runs from the Chaguaramas Peninsula in the west to Toco
Toco
Toco is the most northeasterly village on the island of Trinidad in the County of Saint David at the point where the Caribbean Sea and the Atlantic Ocean meet. Tobago lies only some 35 kilometers to the northeast which renders Toco the closest point in Trinidad to the sister island. The name Toco...
in the east. The eastern Northern Range (areas east of Arima
Arima
The Royal Borough of Arima is the fourth largest town in Trinidad and Tobago. Located east of the capital, Port of Spain, Arima supports the only organised indigenous community in the country, the Santa Rosa Carib Community and is the seat of the Carib Queen...
) remain most heavily forested. Portions west of Arima, especially the southern slopes and valleys, have been extensively deforested, since they lie immediately north of the most heavily populated parts of the island.