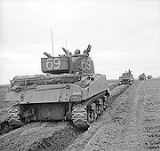 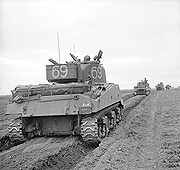 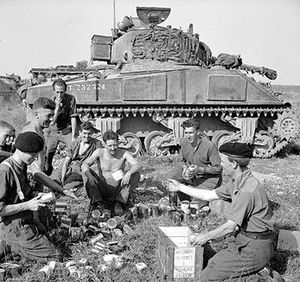 The Northamptonshire Yeomanry was a unit of the British Army
British Army
The British Army is the land warfare branch of Her Majesty's Armed Forces in the United Kingdom. It came into being with the unification of the Kingdom of England and Scotland into the Kingdom of Great Britain in 1707. The new British Army incorporated Regiments that had already existed in England...
formed in 1794 as volunteer cavalry
Cavalry
Cavalry or horsemen were soldiers or warriors who fought mounted on horseback. Cavalry were historically the third oldest and the most mobile of the combat arms...
, it later served in an armoured role before being reduced to squadron level in 1956. It ceased to have a separate existence in 1969.

On mobilisation in August 1914 the 1/1st Northamptonshire Yeomanry was attached to the Eastern Mounted Brigade past of the 1st Mounted Division
1st Mounted Division
The 1st Mounted Division was formed in August 1914 for the home defence of the United Kingdom. It was formed from existing mounted brigades of the Territorial Force, each of three regiments of Yeomanry....
.
In November 1914 they moved to France
France
The French Republic , The French Republic , The French Republic , (commonly known as France , is a unitary semi-presidential republic in Western Europe with several overseas territories and islands located on other continents and in the Indian, Pacific, and Atlantic oceans. Metropolitan France...
with the 8th Division they remained with the 8th Division until April 1915 , when the Regiment was split up with RHQ and B Squadron joining the 6th Division , A Squadron joining the 4th Division
4th Infantry Division (United Kingdom)
The 4th Infantry Division is a regular British Army division with a long history having been present at the Peninsular War the Crimean War , the First World War , and during the Second World War.- Napoleonic Wars :...
and C Squadron the 5th Division.
This lasted until May 1916 when the Regiment reformed becoming the 6th Corps Cavalry Regiment.
In November 1917 they were moved to Italy
Italy
Italy , officially the Italian Republic languages]] under the European Charter for Regional or Minority Languages. In each of these, Italy's official name is as follows:;;;;;;;;), is a unitary parliamentary republic in South-Central Europe. To the north it borders France, Switzerland, Austria and...
, becoming 14th Corps Cavalry.

The 2/1st Northamptonshire Yeomanry were formed in September 1914. In February 1915 they joined the 59th Division.
They were then also split up with the RHQ and A Squadron joining the 69th Division until June 1917. A Squadron was attached to the 67th Division  between October 1916 and June 1917, all units remained in England and were disbanded in 1917.

The 3/1st Northamptonshire Yeomanry was formed in 1915. They remained in the United Kingdom until being drafted into the 6th Reserve Cavalry Regiment in early 1917.

In November 1938 the formation of a Mechanised Cavalry Brigade (TA) was announced, to comprise three Cavalry Light Tank Regiments. The Northamptonshire Yeomanry was selected to form part of this Brigade and ordered to expand to full Regimental status. By early 1939 Regimental Headquarters and "A" Squadron were based at Northampton, with "B" Squadron at Daventry and "C" Squadron at Brackley.

This expansion coincided with the decision to increase the Territorial Army by forming duplicates of existing TA units. These duplicate units are often wrongly described as second-line, however they were not; the duplicate units were afforded equal status to their parent units and were destined to form part of the active field forces immediately upon mobilisation, whereas the second-line units of World War I had been intended to form reserve units for home defence.

As a result of this move the Northamptonshire Yeomanry was divided in May 1939 to form two Cavalry Light Tank Regiments;

1st Northamptonshire Yeomanry (TA) - Regimental Headquarters and "A" Sqn at Northampton, "B" Sqn at Daventry and "C" Sqn at Brackley.

2nd Northamptonshire Yeomanry (TA) - Regimental Headquarters and "A" Sqn at Northampton, "B" and "C" Sqns at Kettering.

Both Regiments formed part of 20th Light Armoured Brigade (TA) and were mobilised on 1 September 1939.

During World War II 1st Northants Yeo (TA) remained in the United Kingdom and from 1941 - 1942 were part of the Coats Mission
Coats Mission
From 1941 to 1942 a special British army unit existed for the purpose of evacuating the King and Queen and their immediate family in the event of German invasion. Led by Major James Coats, MC, Coldstream Guards, later Lieutenant-Colonel Sir James Coats, Bt, it comprised a company of the Coldstream...
, the plan to evacuate the Royal Family
Royal family
A royal family is the extended family of a king or queen regnant. The term imperial family appropriately describes the extended family of an emperor or empress, while the terms "ducal family", "grand ducal family" or "princely family" are more appropriate to describe the relatives of a reigning...
in the event of a German invasion. In 1944 now as a part of the 33rd Armoured Brigade
33rd Armoured Brigade (United Kingdom)
The 33rd Armoured Brigade was a British Army brigade active in 1944-45, in the 1970s, and in 1980-92.- Normandy :The brigade was formed in the UK on 17 March 1944 by re-designating of the 33rd Tank Brigade. The brigade took part in the Normandy campaign and landed on Gold Beach on 6 June 1944...
they participated in the Normandy Landings on D Day June 6. The brigade's three regiments which included the East Riding of Yorkshire Yeomanry
East Riding of Yorkshire Yeomanry
The East Riding of Yorkshire Yeomanry was a unit of the British Army from 1794–1956.The regiment was formed as volunteer cavalry in 1794 during the French Revolutionary Wars. It was converted to an armoured role in 1920. In 1956 it merged with two other Yorkshire yeomanry regiments to form...
and the 144 Regiment
East Lancashire Regiment
The East Lancashire Regiment was, from 1881 to 1958, an infantry regiment of the British Army. The regiment was formed under the Childers Reforms by the amalgamation of two 30th and 59th Regiments of Foot with the militia and rifle volunteer units of eastern Lancashire...
RAC, landed on Gold Beach
Gold Beach
Gold Beach was the code name of one of the D-Day landing beaches that Allied forces used to invade German-occupied France on 6 June 1944, during World War II....
in Normandy
Normandy
Normandy is a geographical region corresponding to the former Duchy of Normandy. It is in France.The continental territory covers 30,627 km² and forms the preponderant part of Normandy and roughly 5% of the territory of France. It is divided for administrative purposes into two régions:...
. Their role was to support any infantry who were in need of armour support, therefore the Brigade rarely fought as one entity. One of the occasions when the Brigade did undertake an operation on its own was at Le Mesnil-Patry , Rots on June 11, 1944.
Further battles they were involved in were around Caen
Caen
Caen is a commune in northwestern France. It is the prefecture of the Calvados department and the capital of the Basse-Normandie region. It is located inland from the English Channel....
, including Operation Charnwood
Operation Charnwood
Operation Charnwood was a Second World War Anglo-Canadian offensive that took place from 8–9 July 1944, during the Battle of Normandy. The operation was intended to at least partially capture the German-occupied French city of Caen , which was an important Allied objective during the opening stages...
7 July, the battle to capture Caen. On the July 16, 1944 it was involved in Operation Pomegranate , where it come under the command of the 59th (Staffordshire) Infantry Division.
On August 8, 1944 it was involved in Operation Totalize , a planned breakout from the Caen Salient. It was during Operation Totalize that Joe Ekins
Joe Ekins
Joe Ekins , is a retired World War II British Army veteran. He gained recognition for apparently killing the famous German tank commander, Michael Wittmann, the 4th top scoring tank ace in history, on August 8, 1944 near St. Aignan de Cramesnil, France...
a Sherman Tank gunner of the Northamptonshire Yeomanry gained recognition for killing the renowned German tank commander, Michael Wittmann
Michael Wittmann
Michael Wittmann was a German Waffen-SS tank commander during the Second World War. Wittmann would rise to the rank of SS-Hauptsturmführer and was a Knight's Cross of the Iron Cross holder....
, the 4th top scoring tank ace in history, on August 8, 1944 near St. Aignan de Cramesnil
Saint-Aignan-de-Cramesnil
Saint-Aignan-de-Cramesnil is a commune in the Calvados department in the Basse-Normandie region in northwestern France.-Population:-Personalities:...
, France
France
The French Republic , The French Republic , The French Republic , (commonly known as France , is a unitary semi-presidential republic in Western Europe with several overseas territories and islands located on other continents and in the Indian, Pacific, and Atlantic oceans. Metropolitan France...
.
They were briefly attached to the 51st (Highland) Division for the actions around the Battle of the Bulge
Battle of the Bulge
The Battle of the Bulge was a major German offensive , launched toward the end of World War II through the densely forested Ardennes mountain region of Wallonia in Belgium, hence its French name , and France and...

The Regiment was reformed and re-equipped with LVT 4 (Buffalo , amphibious armoured fighting vehicles) , for the Rhine crossing and was placed under the command of the 79th Armoured Division.

Both 1st and 2nd Northamptonshire Yeomanry (TA) were demobilised by 1946 and for a short period remained in a state of suspended animation. Then on January 1, 1947 the TA was reconstituted, the 1st and 2nd Northants Yeo were amalgamated and reformed as The Northamptonshire Yeomanry, RAC (TA). The Regiment was assigned to 44th (Home Counties) Infantry Division (TA) as its Divisional Armoured Reconnaissance Regiment. Recruiting for the Regiment began in May 1947 and by 1949 it comprised;

Regimental Headquarters and "A" Sqn at Northampton.
"B" Sqn at Kettering.
"C" Sqn at Brackley, with outlying Troops at Daventry and Towcester. In 1955 the Headquarters moved to Northampton, Brackley being reduced to a Troop location.

In 1950 the Regiment assumed an additional role as a mobile Anti-Tank Regiment, equipped with self-propelled anti-tank guns.

Reorganisations of the TA in 1956 resulted in the Regiment being reduced to a single Squadron as "D" (Northamptonshire Yeomanry) Squadron, The Inns of Court Regiment, RAC (TA). The Headquarters of this Regiment was in the City of London, whilst "D" Sqn was centred upon Northampton.

This state of affairs lasted until April 1961 when "D" Squadron was transferred to the Corps of Royal Engineers and reorganised to form 250th (Northamptonshire Yeomanry) Independent Field Squadron, RE (TA). It was assigned a role in support of the British Army of The Rhine (BAOR) and had its Squadron Headquarters and No.1 Troop at Northampton, No.2 Troop at Kettering and No.3 Troop at Brackley.

When the TA was reorganised into the Territorial & Army Volunteer Reserve (T&AVR) in April 1967 the Northamptonshire Yeomanry formed a successor unit as "A" (Northants Yeo) Company, The Northamptonshire Regiment Territorials. It continued the traditions of the old Regiment until 1969, when the Northants Territorials was reduced to a Cadre, effectively ending the history of the Yeomanry. In 1971 the cadre was reconstiuted as part of the Royal Anglian Regiment
Royal Anglian Regiment
The Royal Anglian Regiment is an infantry regiment of the British Army, part of the Queen's Division.The regiment was formed on 1 September 1964 as the first of the new large infantry regiments, through the amalgamation of the four regiments of the East Anglian Brigade.* 1st Battalion from the...
.

The Regiment had its own Light Aid Detachment of the Royal Electrical and Mechanical Engineers, formed at Northampton in 1947. Sections were later formed at Kettering and Brackley attached to the outlying Squadrons. When the Regiment was reduced to Squadron size in 1956 it lost its own L.A.D, which was redesignated as a Platoon of 169th (London) Infantry Workshops, REME (TA) and was centred upon Kettering, thus becoming part of 56th (London) Infantry Division (TA). In April 1961 this Platoon was transferred to form The "B" Vehicles Platoon of 104th Medium Workshops, REME (TA).

Upon the formation of the T&AVR, 104th Med Wksps was reformed into part of 118th Recovery Company, REME (V) at Northampton and Corby.
The source of this article is wikipedia, the free encyclopedia.  The text of this article is licensed under the GFDL.