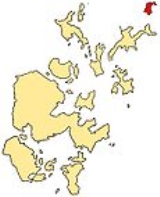 Encyclopedia
North Ronaldsay is the northernmost of the Orkney Islands
Orkney Islands
Orkney also known as the Orkney Islands , is an archipelago in northern Scotland, situated north of the coast of Caithness...
, Scotland
Scotland
Scotland is a country that is part of the United Kingdom. Occupying the northern third of the island of Great Britain, it shares a border with England to the south and is bounded by the North Sea to the east, the Atlantic Ocean to the north and west, and the North Channel and Irish Sea to the...
and with an area of 2.7 square miles (7 km²) is the fourteenth largest.

North Ronaldsay lies around 4 kilometres (2.5 mi) north of its nearest neighbour, Sanday
Sanday, Orkney
Sanday is one of the inhabited islands in the Orkney Islands, off the north coast of Scotland. With an area of , it is the third largest of the Orkney Islands. The main centres of population are Lady Village and Kettletoft. Sanday can be reached by Orkney Ferries or plane from Kirkwall on the...
at . The island is around 5 kilometres (3.1 mi) long along its length and is defined by two large sandy bays; Linklet Bay on the eastern shoreline and South Bay at the south. The west of the island is very rocky with many skerries
Skerry
A skerry is a small rocky island, usually defined to be too small for habitation. It may simply be a rocky reef. A skerry can also be called a low sea stack....
. Low lying and exposed, the island's climate is extremely changeable and frequently inclement. The surrounding waters are stormy and treacherous, and have been a notorious 'graveyard' for ships (hence the unusually early provision of a lighthouse on the island).

Hollandstoun at the south of the island is the most sizable settlement lying roughly equidistant from the airfield and the pier. The island is also home to a bird observatory
Bird observatory
A bird observatory is a centre for the study of bird migration and bird populations. They are usually focused on local birds, but may also include interest in far flung areas. Most bird observatories are small operations with a limited staff, many volunteers and a not-for-profit educational status...
.

According to the Orkneyinga Saga
Orkneyinga saga
The Orkneyinga saga is a historical narrative of the history of the Orkney Islands, from their capture by the Norwegian king in the ninth century onwards until about 1200...
, Torf-Einarr
Torf-Einarr
Einarr Rögnvaldarson, Torf-Einarr or Turf-Einar was one of the Norse Earls of Orkney. His rise to power is related in sagas which apparently draw on verses of Einarr's own composition for inspiration...
the 10th century Norse Earl of Orkney
Earl of Orkney
The Earl of Orkney was originally a Norse jarl ruling Orkney, Shetland and parts of Caithness and Sutherland. The Earls were periodically subject to the kings of Norway for the Northern Isles, and later also to the kings of Alba for those parts of their territory in mainland Scotland . The Earl's...
killed Hálfdan Longlegs on North Ronaldsay in revenge for Hálfdan and his brother Gudrød Ljome's slaying of Rögnvald Eysteinsson, Torf-Einarr's father. Hálfdan and Gudrød, who were the sons of King Harald Finehair of Norway had trapped Rögnvald in his house and set it alight. Harald, apparently appalled by his sons' actions, overthrew Gudrød and restored Rögnvald's lands to his son, Thorir Rögnvaldarson, whilst Hálfdan fled westwards to Orkney and displaced Torf-Einarr. From a base in Caithness
Caithness
Caithness is a registration county, lieutenancy area and historic local government area of Scotland. The name was used also for the earldom of Caithness and the Caithness constituency of the Parliament of the United Kingdom . Boundaries are not identical in all contexts, but the Caithness area is...
, Torf-Einarr resisted Hálfdan's occupation of the islands. After a battle at sea, and a ruthless campaign on land, Torf-Einarr spied Hálfdan hiding on North Ronaldsay. The sagas claim that Hálfdan was captured, and sacrificed to Odin
Odin
Odin is a major god in Norse mythology and the ruler of Asgard. Homologous with the Anglo-Saxon "Wōden" and the Old High German "Wotan", the name is descended from Proto-Germanic "*Wodanaz" or "*Wōđanaz"....
as a blood-eagle.

Flights link the island with Kirkwall
Kirkwall
Kirkwall is the biggest town and capital of Orkney, off the coast of northern mainland Scotland. The town is first mentioned in Orkneyinga saga in the year 1046 when it is recorded as the residence of Rögnvald Brusason the Earl of Orkney, who was killed by his uncle Thorfinn the Mighty...
on the Orkney Mainland, as does a weekly ferry
Ferry
A ferry is a form of transportation, usually a boat, but sometimes a ship, used to carry primarily passengers, and sometimes vehicles and cargo as well, across a body of water. Most ferries operate on regular, frequent, return services...
operated by Orkney Ferries
Orkney Ferries
Orkney Ferries is a company operating inter-island ferry services in Orkney, to the north of mainland Scotland.-History:The company is owned by the Orkney Islands Council and was established in 1960 as the Orkney Islands Shipping Company....
. 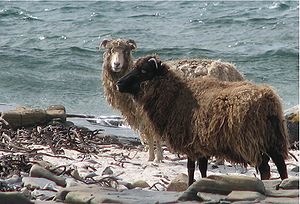 The main industries on the island are crofting
Crofting
Crofting is a form of land tenure and small-scale food production unique to the Scottish Highlands, the Islands of Scotland, and formerly on the Isle of Man....
and sheep farming, where unique North Ronaldsay sheep
North Ronaldsay sheep
The North Ronaldsay is a breed of sheep living on North Ronaldsay, the northernmost of the Orkney Islands, Scotland. They are one survivor of a type of sheep formerly found across the islands of Orkney and Shetland , belonging to the Northern European short-tailed sheep group of breeds.They are...
are largely farmed collectively. Tourism
Tourism
Tourism is travel for recreational, leisure or business purposes. The World Tourism Organization defines tourists as people "traveling to and staying in places outside their usual environment for not more than one consecutive year for leisure, business and other purposes".Tourism has become a...
also plays an important role.
The island has a population of 60, roughly half of whom are descended from native islanders and half are new islanders, who have come to live there. There is great interest in attracting new families with young children in order to keep the school open, since that is vital for the economy.

Established in 1987, the observatory's main purpose is to conduct long-term monitoring of bird populations and migration. North Ronaldsay is well-known as one of the best bird watching sites in the country during the Spring and Autumn migration periods. The quantity and variety of birds that can be seen at these times is often spectacular!

Dennis Head in the north east of the island is home to an historic lighthouse known as the Old Beacon
Dennis Head Old Beacon
Dennis Head Old Beacon is a ruined lighthouse on the island of North Ronaldsay, Orkney, Scotland. It featured on the 2006 BBC television series Restoration Village finishing in third place. The beacon and keepers' houses are protected as category A listed buildings.The tower was completed in 1789...
. The light was first established in 1789 by Thomas Smith
Thomas Smith (engineer)
Thomas Smith was a Scottish businessman and early lighthouse engineer. Born in Broughty Ferry, Dundee, his father drowned in Dundee harbour when he was young...
. It was to be the first of many island lighthouses for Smith (he had previously worked on the lights at Kinnaird Head
Kinnaird Head
Kinnaird Head is a headland projecting into the North Sea, within the town of Fraserburgh, Aberdeenshire on the east coast of Scotland. It is the site of the first lighthouse in Scotland to be lit by the Commissioners of Northern Lights...
and Mull of Kintyre
Mull of Kintyre
The Mull of Kintyre is the southwesternmost tip of the Kintyre Peninsula in southwest Scotland. From here, the Antrim coast is visible and an historic lighthouse, the second commissioned in Scotland, guides shipping in the intervening North Channel...
). Smith received assistance with the North Ronaldsay light from Ezekiel Walker and from his stepson Robert Stevenson
Robert Stevenson (civil engineer)
Robert Stevenson FRSE MInstCE FSAS MWS FGS FRAS FSA was a Scottish civil engineer and famed designer and builder of lighthouses.One of his finest achievements was the construction of the Bell Rock Lighthouse.-Early life:...
.

In 1809 with the construction of other nearby lighthouses it was decided that the North Ronaldsay light was no longer required and it was extinguished. The round stone tower was retained as a sea-mark, however, and the original beacon chamber at the top replaced by a vaulted roof capped by a remarkable ball finial. The stone spiral staircase which once led to the beacon was demolished. The original keepers' houses, roofless but largely complete, survive below the tower. In 2006, it was one of the neglected buildings selected for the Restoration
Restoration (TV series)
Restoration, Restoration, Restoration is a set of BBC television series where viewers decided on which listed building that was in immediate need of remedial works was to win a grant from Heritage Lottery Fund...
TV series.

However a new lighthouse was built nearby just 43 years later in 1852. The modern lighthouse lies at the north of the island at Point of Sinsoss and boasts Britain's tallest land based lighthouse tower. The old fog siren with notable red trumpet was replaced by a electric diaphragm type horn. That horn was discontinued in favor of a Tyfon horn consisting of 8 mini trumpets installed on the building that once housed the fog siren. The Tyfon horn gives 3 blasts every 60 seconds. The electric beeper horn is now lying flat on the ground next to the fog signal building. The fog signal is still in service today.