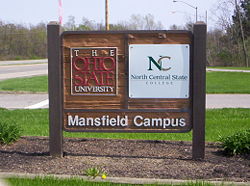 North Central State College is a two-year state college, located in Mansfield
Mansfield, Ohio
Mansfield is a city in the U.S. state of Ohio and the county seat of Richland County. The municipality is located in north-central Ohio in the western foothills of the Allegheny Plateau, approximately southwest of Cleveland and northeast of Columbus....
, Ohio
Ohio
Ohio is a Midwestern state in the United States. The 34th largest state by area in the U.S.,it is the 7th‑most populous with over 11.5 million residents, containing several major American cities and seven metropolitan areas with populations of 500,000 or more.The state's capital is Columbus...
. It is located on the 644 acres (2.6 km²) Mansfield Campus with The Ohio State University
Ohio State University, Mansfield Campus
The Ohio State University at Mansfield is a regional campus of The Ohio State University located in Mansfield, Ohio. It was founded in 1958 as a land-grant college. Its campus is situated in the western foothills of the Allegheny Plateau, the North Central Ohio region, with easy access to Columbus...
. NCSC offers associate's degree
Associate's degree
An associate degree is an undergraduate academic degree awarded by community colleges, junior colleges, technical colleges, and bachelor's degree-granting colleges and universities upon completion of a course of study usually lasting two years...
s and certification programs in a number of career fields including business, computers, engineering, health science and public service, technology and workforce development.

In 1961, the Mansfield, Ohio, Board of Education established Mansfield School of Technology, the predecessor of North Central State College. This institution's primary purpose was to provide local residents with technical training so that they could advance in the workplace or secure better careers. In 1968, the Ohio Board of Regents authorized Mansfield School of Technology to become North Central Technical College. This new institution expanded its programs beyond Mansfield to include residents of Ashland, Crawford, and Richland Counties. As the college continued to grow and offered a wider array of courses, the institution became known, in 1999, as North Central State College. North Central State College shares facilities with The Ohio State University at Mansfield. The college also offered courses in Shelby, Ohio. In 2005, North Central State College offered nearly thirty Associate degree and thirty certificate degree programs.
The College has articulation
Articulation (education)
In Australia and United States education, articulation or more specifically course articulation, refers to the process of comparing the content of courses that are transferred between postsecondary institutions such as TAFE institutes, colleges or universities...
agreements with a number of four-year institutions in Ohio for students who wish to transfer to other institutions and continue their education without the loss of credits earned.