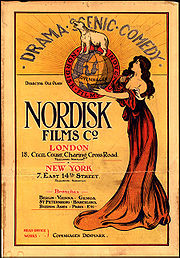 In 1992 it merged with the Egmont
Egmont Group
The Egmont Group is a media corporation founded and rooted in Copenhagen, Denmark. The business area of Egmont has traditionally been magazine publishing but has over the years evolved to comprise media generally....
media group and operates today as electronic media production and distribution group that employs 1,090 people in six countries. The total revenues in 2003 amounted to approximately € 345 million. Today, Nordisk Film is the oldest movie production company in operation in the world. Egmont Nordisk Film is the largest producer and distributor of electronic entertainment in the Nordic region. Nordisk Film incorporates all parts of the value chain in the electronic entertainment world: development, production, marketing and distribution.

The company produces and co-produces national and international feature films in Denmark
Denmark
Denmark is a Scandinavian country in Northern Europe. The countries of Denmark and Greenland, as well as the Faroe Islands, constitute the Kingdom of Denmark . It is the southernmost of the Nordic countries, southwest of Sweden and south of Norway, and bordered to the south by Germany. Denmark...
, Norway
Norway
Norway , officially the Kingdom of Norway, is a Nordic unitary constitutional monarchy whose territory comprises the western portion of the Scandinavian Peninsula, Jan Mayen, and the Arctic archipelago of Svalbard and Bouvet Island. Norway has a total area of and a population of about 4.9 million...
and Sweden
Sweden
Sweden , officially the Kingdom of Sweden , is a Nordic country on the Scandinavian Peninsula in Northern Europe. Sweden borders with Norway and Finland and is connected to Denmark by a bridge-tunnel across the Öresund....
, which are distributed to cinemas around the Nordic countries, including Nordisk Film Cinemas in Denmark and Norway with approximately 16,000 seats. The films are also distributed internationally for viewing in cinemas, on video and on television. Additionally, Nordisk Film produces animated content and feature films.

In summer of 2010, it was announced that they will distribute Denmark's first 3-D film
3-D film
A 3-D film or S3D film is a motion picture that enhances the illusion of depth perception...
, a CGI adaptation of the Olsen Gang
Olsen Gang
The Olsen Gang is a fictional Danish criminal gang in the movies of the same name. The gang's leader is the criminal genius and habitual offender Egon Olsen. The other members of the gang are Benny and Kjeld . The gang members are harmless and never use violence...
produced by A. Film A/S
A. Film A/S
A. Film A/S is a Danish animation studio based in Copenhagen, Denmark. It produces traditional and CGI animation for feature films, television, advertising and games...
. It is probable that the film may be released in Real D 3D

Nordisk Film Interactive has exclusive distribution rights to Sony
Sony
, commonly referred to as Sony, is a Japanese multinational conglomerate corporation headquartered in Minato, Tokyo, Japan and the world's fifth largest media conglomerate measured by revenues....
PlayStation
PlayStation
The is a 32-bit fifth-generation video game console first released by Sony Computer Entertainment in Japan on December 3, .The PlayStation was the first of the PlayStation series of consoles and handheld game devices. The PlayStation 2 was the console's successor in 2000...
products in the Nordic countries
Nordic countries
The Nordic countries make up a region in Northern Europe and the North Atlantic which consists of Denmark, Finland, Iceland, Norway and Sweden and their associated territories, the Faroe Islands, Greenland and Åland...
, and is thereby responsible for a substantial business area in Nordisk Film.

Egmont Nordisk Film's TV departments develop and produce some of the most popular TV programmes in the Nordic countries and sell their TV programmes worldwide. Its commercial production company, Locomotion, is behind many commercials for screening in cinemas and on television and also produce music videos both for the Nordic and the international market.

Nordisk Film Distribution handles and distributes the rights to own productions, a number of local films as well as independent productions. In addition to this, Nordisk Film has a co-operation with Sony Pictures Entertainment
Sony Pictures Entertainment
Sony Pictures Entertainment, Inc. is the television and film production/distribution unit of Japanese multinational technology and media conglomerate Sony...
in regards to theatrical distribution. Egmont Nordisk Film is behind approximately one in every 5 theatrical films and their Video Distribution is a major player in the Nordic countries and the TV Distribution not only handles the sales and distribution of film rights and entertainment formats in the Nordic countries, they also manage the sales of rights around the world for the majority of Scandinavia’s most well-known film producers.
The source of this article is wikipedia, the free encyclopedia.  The text of this article is licensed under the GFDL.