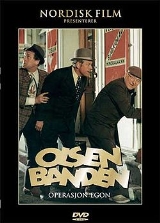 Encyclopedia
The Olsen Gang is a fictional Danish
Denmark
Denmark is a Scandinavian country in Northern Europe. The countries of Denmark and Greenland, as well as the Faroe Islands, constitute the Kingdom of Denmark . It is the southernmost of the Nordic countries, southwest of Sweden and south of Norway, and bordered to the south by Germany. Denmark...
criminal gang in the movies of the same name. The gang's leader is the criminal genius and habitual offender Egon Olsen
Egon Olsen
Egon Olsen is a fictional character in the Danish film series The Olsen Gang and the Norwegian film series Olsenbanden. He is portrayed by Ove Sprogøe in the Danish movies and by Arve Opsahl in the Norwegian versions...
. The other members of the gang are Benny and Kjeld (Kjell in Norwegian). The gang members are harmless and never use violence. A Norwegian version of the movies (a total of 14 from 1968 to 1999) were also made, sometimes produced simultaneously with the Danish ones. Later, Sweden also produced their own version: Jönssonligan.

Most of the movies start with Egon coming out of jail and being enthusiastically welcomed by Benny and Kjeld. The three men will then have a beer together in the living room of Kjeld's dilapidated home in a run-down Valby
Valby
' is one of the 10 official districts of Copenhagen, Denmark. Located in the southwestern corner of Copenhagen Municipality, it is a heterogeneous mixture of different types of housing - including apartment blocks, terraced housing, areas with single-family houses and allotments, as well as remains...
neighbourhood. Egon will inform his friends of his latest plan for making them all millionaires (for example, eluding an alarm system to steal some crown jewels that happen to be on display in Copenhagen) and instruct them to provide the necessary equipment. The plans usually feature everyday artefacts such as Lego
Lego
Lego is a line of construction toys manufactured by the Lego Group, a privately held company based in Billund, Denmark. The company's flagship product, Lego, consists of colorful interlocking plastic bricks and an accompanying array of gears, minifigures and various other parts...
, party balloons, cigarettes etc., which are combined to work like Rube Goldberg machine
Rube Goldberg machine
A Rube Goldberg machine, contraption, device, or apparatus is a deliberately over-engineered or overdone machine that performs a very simple task in a very complex fashion, usually including a chain reaction...
s, and clever social engineering
Social engineering (security)
Social engineering is commonly understood to mean the art of manipulating people into performing actions or divulging confidential information...
. Egon often serves time with lawyers or executives who provide him with the information he needs, such as duty rosters for the national public record office.

Egon's plans often bring the gang into perilously close contact with white-collar criminals
White-collar crime
Within the field of criminology, white-collar crime has been defined by Edwin Sutherland as "a crime committed by a person of respectability and high social status in the course of his occupation" . Sutherland was a proponent of Symbolic Interactionism, and believed that criminal behavior was...
from the Danish business (and political) elite. For example, in one episode some well-connected people try to make money out of the so-called "butter mountain", a huge amount of butter bought up and stored by the EEC
European Economic Community
The European Economic Community The European Economic Community (EEC) The European Economic Community (EEC) (also known as the Common Market in the English-speaking world, renamed the European Community (EC) in 1993The information in this article primarily covers the EEC's time as an independent...
(now the EU) to keep prices up. Egon Olsen learns about this from a lawyer who is serving prison time, and the gang interferes with the plan to secure the millions for themselves. But as always, Egon – after having succeeded with a genius plan – loses because he underestimates the power and unscrupulousness of these people.

Egon is usually arrested in the end because the police cannot get to the "big fish" and have to find a scapegoat. Superintendent Jensen (Hermansen in Norwegian) tells his younger colleague, inspector Holm: "The only thing the police can do when the real big criminals come by is offer them protection!" This kind of social satire is one of the defining features of the Olsen Gang films.

In the early episodes, harsh language and soft-erotica (temptingly dressed women) were more freely used than in later versions, which were censored to suit youngsters.

The Olsen Gang have been made in Norwegian and Swedish
Sweden
Sweden , officially the Kingdom of Sweden , is a Nordic country on the Scandinavian Peninsula in Northern Europe. Sweden borders with Norway and Finland and is connected to Denmark by a bridge-tunnel across the Öresund....
(Jönssonligan
Jönssonligan
Jönssonligan, literally the Jönsson League, is featured in a series of comedic Swedish films. The gang consists of the criminal genius Charles Ingvar "Sickan" Jönsson, hence the name, and his two companions "Dynamit-Harry" and Ragnar Vanheden...
) versions too. The movies differ a bit from each other, but they follow a generally similar formula to the Danish films. The original, Danish movies were popular in the former GDR and Eastern Europe
Eastern Europe
Eastern Europe is the eastern part of Europe. The term has widely disparate geopolitical, geographical, cultural and socioeconomic readings, which makes it highly context-dependent and even volatile, and there are "almost as many definitions of Eastern Europe as there are scholars of the region"...
.

The Norwegian versions of the movies also have another character, 'Dynamite Harry', as the little brother of Benny Frandsen – he is the demolition expert (although his nerves are very easily shaken due to years of having dealt with explosives and alcohol). Harry made an appearance in six Norwegian films, played by Harald Heide-Steen Jr.
Harald Heide-Steen Jr.
Harald Heide-Steen Jr. was a Norwegian actor, comedian and singer. He was the son of Harald Heide Steen. During the 1960s, Harald Heide-Steen. Jr made the radio programs Hørerøret, Sugerøret and Pusterøretat at NRK with Gunnar Haugan and Rolv Wesenlund.Harald Heide-Steen Jr...
. He also appeared in two early Danish Olsen Gang movies, then played by Preben Kaas
Preben Kaas
Preben Kaas was a Danish film actor. He appeared in 55 films between 1943 and 1980.He was born in Aalborg, Denmark and died in Denmark.Preben Kaas was married to Anne Marie Lie and Lisbet Dahl...
. In the Swedish Jönssonligan movies Harry showed up in the second movie, and became a regular member of the gang from the next installment on, since the actor who played the original member, a Finn named Rocky, had died. In the Swedish version, Egon was replaced by Charles-Ingvar "Sickan" Jönsson, with a slightly different costume and mannerisms, and in later films when the actor Gösta Ekman
Gösta Ekman
Hans Gösta Gustaf Ekman is a Swedish actor.-Biography:One of Sweden's most appreciated, respected and popular actors; Gösta Ekman started his career in theatre but has also appeared in several Swedish films, including the Jönssonligan series...
got tired of the character, yet other leaders, who never became as popular as "Sickan". Benny's part was taken by "(Ragnar) Vanheden", a small-timer from Stockholm
Stockholm
Stockholm is the capital and the largest city of Sweden and constitutes the most populated urban area in Scandinavia. Stockholm is the most populous city in Sweden, with a population of 851,155 in the municipality , 1.37 million in the urban area , and around 2.1 million in the metropolitan area...
. 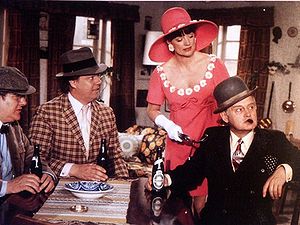 The first 13 movies were directed by Erik Balling, while Tom Hedegaard and Morten Arnfred
Morten Arnfred
Morten Arnfred is a Danish film director and screenwriter. His 1983 film Der er et yndigt land was entered into the 33rd Berlin International Film Festival, where it won an Honourable Mention...
directed the fourteenth and final Olsen Gang movie. The scripts were written by Balling and Henning Bahs
Henning Bahs
Henning Bahs was a Danish screenwriter and special effects designer. He wrote for 41 films between 1960 and 2002...
, who also worked as a production designer
Production designer
In film and television, a production designer is the person responsible for the overall look of a filmed event such as films, TV programs, music videos or adverts. Production designers have one of the key creative roles in the creation of motion pictures and television. Working directly with the...
.

Several elements recur in the movie series. Usually, can note the main sponsor by looking at the villain's cars, the security cars, the police cars, the gang's car, and so on. Usually, Toyota has been the main sponsor of the movie series, supplying the movies with civilian cars parked on the sidewalks, Crowns
Toyota Crown
The Toyota Crown is a line of full-size luxury sedans by Toyota. The range was primarily available in Japan and some other Asian countries, originally designed to serve as a taxi...
as taxis, Toyota Cressida
Toyota Cressida
The Toyota Cressida was a mid-size sedan marketed by Toyota from December 1976 to February 1993 through four generations. It was the flagship sedan of Toyota in the United States. The same chassis with slightly different bodies was available in other countries as the Toyota Mark II, Toyota Chaser...
as police cars, Hiace as security vans and money transports, and so on. There have been exceptions, notably Olsenbandens aller siste kupp (The Olsen-Gangs very last coup) from 1982, which was sponsored by Datsun
Datsun
Datsun was an automobile marque. The name was created in 1931 by the DAT Motorcar Co. for a new car model, spelling it as "Datson" to indicate its smaller size when compared to the existing, larger DAT car. Later, in 1933 after Nissan Motor Co., Ltd...
. 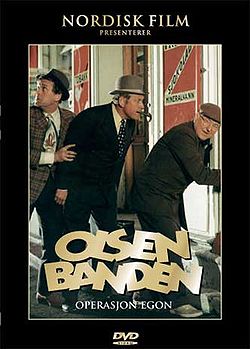 Most of the Norwegian movies have been digitally restored. The discs include English & Norwegian Subtitles, 16:9 format and Dolby Digital 1.0 surround sound.