A blimp, or non-rigid airship, is a floating airship
Airship
An airship or dirigible is a type of aerostat or "lighter-than-air aircraft" that can be steered and propelled through the air using rudders and propellers or other thrust mechanisms...
without an internal supporting framework or keel. A non-rigid airship differs from a semi-rigid
Semi-rigid airship
Semi-rigid airships are airships with a partial framework. These often consist of a rigid, or occasionally, flexible, keel frame along the long axis under the aerodynamic hull envelope. The partial framework can also be located inside the hull...
airship and a rigid airship
Rigid airship
A rigid airship is a type of airship in which the envelope retained its shape by the use of an internal structural framework rather than by being forced into shape by the pressure of the lifting gas within the envelope as used in blimps and semi-rigid airships.Rigid airships were produced and...
(e.g., a Zeppelin
Zeppelin
A Zeppelin is a type of rigid airship pioneered by the German Count Ferdinand von Zeppelin in the early 20th century. It was based on designs he had outlined in 1874 and detailed in 1893. His plans were reviewed by committee in 1894 and patented in the United States on 14 March 1899...
) in that it does not have any rigid structure, neither a complete framework nor a partial keel, to help the airbag maintain its shape. Rather, these aircraft
Aircraft
An aircraft is a vehicle that is able to fly by gaining support from the air, or, in general, the atmosphere of a planet. An aircraft counters the force of gravity by using either static lift or by using the dynamic lift of an airfoil, or in a few cases the downward thrust from jet engines.Although...
rely on both a higher pressure of the lifting gas
Lifting gas
Because of the Archimedes' principle, a lifting gas is required for aerostats to create buoyancy. Its density is lower than that of air . Only certain lighter than air gases are suitable as lifting gases.- Hot Air :...
(usually helium
Helium
Helium is the chemical element with atomic number 2 and an atomic weight of 4.002602, which is represented by the symbol He. It is a colorless, odorless, tasteless, non-toxic, inert, monatomic gas that heads the noble gas group in the periodic table...
) inside the envelope and the strength of the envelope itself.

Since blimps keep their shape with internal overpressure, typically the only solid parts are the passenger car (gondola) and the tail fins
Empennage
The empennage , also known as the tail or tail assembly, of most aircraft gives stability to the aircraft, in a similar way to the feathers on an arrow...
. A non-rigid airship that uses heated air instead of a light gas (such as helium) as a lifting medium is called a hot-air airship
Thermal airship
A thermal airship is an airship that generates its lift via the difference in density due to a temperature differential between the gas inside its envelope and the ambient air. Currently all thermal airships use hot air, as used in a hot air balloon, as their lifting gas...
.

Volume changes of the lifting gas, due to temperature changes, is balanced using ballonet
Ballonet
A Ballonet is a air-filled flexible container that is located inside the envelope of a non-rigid or semi-rigid airship. Such an airship can have one or more ballonets, commonly one fore and one aft...
s (air bags), in order to maintain the overpressure. Without sufficient overpressure, the blimp loses its ability to be steered and top speed is degraded. The propeller air stream can be used to inflate the hull. In some models, such as the Skyship 600
Skyship 600
The Skyship 600 is a modern airship, originally designed by British company Airship Industries, and now owned and operated by Airship Management Services and Skycruise Switzerland AG.The first Skyship 600 made its maiden flight on 6 March 1984....
, differential ballonet inflation can provide a measure of pitch trim
Flight dynamics
Flight dynamics is the science of air vehicle orientation and control in three dimensions. The three critical flight dynamics parameters are the angles of rotation in three dimensions about the vehicle's center of mass, known as pitch, roll and yaw .Aerospace engineers develop control systems for...
control.

The engines driving the propellers are usually directly attached to the gondola, and in some models are partly steerable.

Modern blimps launch somewhat heavier than air (overweight), in contrast to historic blimps. The missing lift is provided by lifting the nose and using engine power. Some types also use steerable propellers or ducted fan
Ducted fan
A ducted fan is a propulsion arrangement whereby a fan, which is a type of propeller, is mounted within a cylindrical shroud or duct. The duct reduces losses in thrust from the tip vortices of the fan, and varying the cross-section of the duct allows the designer to advantageously affect the...
s. Operating in a state heavier than air avoids the need to dump ballast
Buoyancy compensator (aviation)
The static buoyancy of airships during a trip is not constant. It is therefore necessary to take measures to control the buoyancy and thus the altitude, the so-called buoyancy compensation.-Changes which have an effect on buoyancy:...
at lift-off and also avoids the need to lose costly lifting gas on landing. 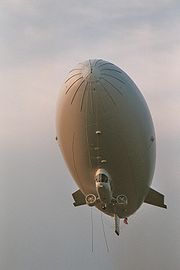 The term "blimp" is reportedly onomatopoeic, the sound the airship makes when one taps the envelope (balloon
Balloon
A balloon is an inflatable flexible bag filled with a gas, such as helium, hydrogen, nitrous oxide, oxygen, or air. Modern balloons can be made from materials such as rubber, latex, polychloroprene, or a nylon fabric, while some early balloons were made of dried animal bladders, such as the pig...
) with a finger. Although there is some disagreement among historians, credit for coining the term is usually given to Lt. A.D. Conningham of the British Royal Navy
Royal Navy
The Royal Navy is the naval warfare service branch of the British Armed Forces. Founded in the 16th century, it is the oldest service branch and is known as the Senior Service...
in 1915.

A 1943 etymology published in the New York Times confirms the British origin during the First World War when the British were experimenting with lighter-than-air craft. The initial non-rigid aircraft was called the A-limp; and a second version called the B-limp was deemed more satisfactory.

A different derivation is given by Barnes & James in Shorts
Short Brothers
Short Brothers plc is a British aerospace company, usually referred to simply as Shorts, that is now based in Belfast, Northern Ireland. Founded in 1908, Shorts was the first company in the world to make production aircraft and was a manufacturer of flying boats during the 1920s, 1930s, and 1940s...
Aircraft since 1900:
An oft-repeated, but false, etymology is that the United States military initially had two classes of aircraft: A-rigid and B-limp, hence "blimp". In fact,

The B class blimps were patrol airships operated by the United States Navy during and shortly after World War I. The Navy learned a great deal from the DN-1
DN-1 (airship)
-See also:...
fiasco. The result was the very successful B-type airships. Dr. Jerome Hunsaker was asked to develop a theory of airship design, Lt. John H. Towers returned from Europe having inspected British designs, the Navy sought bids for 16 blimps from American manufacturers. On 4 February 1917 the Secretary of the Navy directed that 16 nonrigid airships of Class B be procured. [1] Ultimately Goodyear built 9 envelopes, Goodrich built 5 and Curtiss built the gondolas for all of those 14 ships. Connecticut Aircraft contracted with U.S. Rubber for its two envelopes and with Pigeon Fraser for its gondolas. The Curtiss-built gondolas were modified JN-4 fuselages and were powered by OX-5 engines. The Connecticut Aircraft blimps were powered by Hall-Scott engines.

In 1930 a former German airship officer, Captain Anton Heinen, working in the US for the US Navy on it dirigible fleet attempted to design a build a four place blimp called the family air yacht for private fliers which if placed in production the inventor claimed would be priced below $10,000 and easier to fly than a fixed wing aircraft. It was unsuccessful.

There are several blimps worldwide. Some examples include: