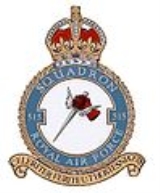 Encyclopedia
No. 515 Squadron RAF was a squadron of the Royal Air Force
Royal Air Force
The Royal Air Force is the aerial warfare service branch of the British Armed Forces. Formed on 1 April 1918, it is the oldest independent air force in the world...
formed during the Second World War. It stood at the brink of Electronic countermeasures
Electronic countermeasures
An electronic countermeasure is an electrical or electronic device designed to trick or deceive radar, sonar or other detection systems, like infrared or lasers. It may be used both offensively and defensively to deny targeting information to an enemy...
(ECM) warfare, jamming enemy radar installations from October 1942. This was first done as only such squadron in the RAF, but later in the war together with other squadrons of No. 100 Group RAF
No. 100 Group RAF
No. 100 Group was a special duties group within RAF Bomber Command.It was formed on 11 November 1943 to consolidate the increasingly complex business of electronic warfare and countermeasures within one organisation. The group was responsible for the development, operational trial and use of...
. The squadron disbanded after VE day
Victory in Europe Day
Victory in Europe Day commemorates 8 May 1945 , the date when the World War II Allies formally accepted the unconditional surrender of the armed forces of Nazi Germany and the end of Adolf Hitler's Third Reich. The formal surrender of the occupying German forces in the Channel Islands was not...
, when the need for such a specialised squadron had evaporated.

The squadron was formed from the Defiant Flight, also known as the Special Duties Flight at RAF Northolt
RAF Northolt
RAF Northolt is a Royal Air Force station situated in South Ruislip, east by northeast of Uxbridge in the London Borough of Hillingdon, West London. Approximately north of London Heathrow Airport, the station also handles a large number of private civil flights...
on 1 October 1942. The Flight, was equipped with former Defiant Mk.II
Boulton Paul Defiant
The Boulton Paul Defiant was a British interceptor aircraft that served with the Royal Air Force early in the Second World War. The Defiant was designed and built by Boulton Paul Aircraft as a "turret fighter", without any forward-firing guns. It was a contemporary of the Royal Navy's Blackburn Roc...
fighters, as part of No. 11 Group RAF
No. 11 Group RAF
No. 11 Group was a group in the Royal Air Force for various periods in the 20th century, finally disbanding in 1996. Its most famous service was during 1940 when it defended London and the south-east against the attacks of the Luftwaffe during the Battle of Britain.-First World War:No. 11 Group was...
in Fighter Command
RAF Fighter Command
RAF Fighter Command was one of three functional commands of the Royal Air Force. It was formed in 1936 to allow more specialised control of fighter aircraft. It served throughout the Second World War, gaining recognition in the Battle of Britain. The Command continued until 17 November 1943, when...
to perform radar jamming duties with Moonshine and Mandrel. They rebased to RAF Heston later that month, and began to be re-equipped with the Beaufighter Mk.IIf
Bristol Beaufighter
The Bristol Type 156 Beaufighter, often referred to as simply the Beau, was a British long-range heavy fighter modification of the Bristol Aeroplane Company's earlier Beaufort torpedo bomber design...
in May 1943.

The squadron transferred in December 1943 to No. 100 Group RAF
No. 100 Group RAF
No. 100 Group was a special duties group within RAF Bomber Command.It was formed on 11 November 1943 to consolidate the increasingly complex business of electronic warfare and countermeasures within one organisation. The group was responsible for the development, operational trial and use of...
in Bomber Command
RAF Bomber Command
RAF Bomber Command controlled the RAF's bomber forces from 1936 to 1968. During World War II the command destroyed a significant proportion of Nazi Germany's industries and many German cities, and in the 1960s stood at the peak of its postwar military power with the V bombers and a supplemental...
, and moved to RAF Little Snoring
RAF Little Snoring
RAF Little Snoring was a World War II era RAF Heavy Bomber airfield located just to the north of the Norfolk village of Little Snoring. The airfield remains open for general aviation use-Operational units and aircraft:* Heavy Conversion...
. There they re-equipped with Mosquito Mk.VI
De Havilland Mosquito
The de Havilland DH.98 Mosquito was a British multi-role combat aircraft that served during the Second World War and the postwar era. It was known affectionately as the "Mossie" to its crews and was also nicknamed "The Wooden Wonder"...
s in March 1944, and operated these for the remainder of the war. At the end of its existence 515 squadron had operated 1,366 operational sorties with the Mosquito with a loss of 21 aircraft. The squadron was disbanded at Little Snoring on the 10 June 1945, most of its crew going on to No. 627 Squadron RAF
No. 627 Squadron RAF
No. 627 Squadron was a Royal Air Force Mosquito aircraft pathfinder bomber squadron that operated during the Second World War.-History:The squadron was formed on 12 November 1943 at RAF Oakington from part of 139 Squadron. It was equipped with the de Havilland Mosquito twin-engined fighter-bomber...
.