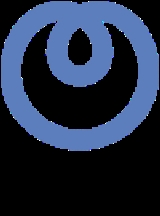 Encyclopedia
, commonly known as NTT, is a Japanese telecommunications company headquartered in Tokyo, Japan. Ranked the 31st in Fortune Global 500
Fortune Global 500
The Fortune Global 500 is a ranking of the top 500 corporations worldwide as measured by revenue. The list is compiled and published annually by Fortune magazine....
, NTT is the largest telecommunications company in Asia
Asia
Asia is the world's largest and most populous continent, located primarily in the eastern and northern hemispheres. It covers 8.7% of the Earth's total surface area and with approximately 3.879 billion people, it hosts 60% of the world's current human population...
, and the second-largest in the world in terms of revenue
Revenue
In business, revenue is income that a company receives from its normal business activities, usually from the sale of goods and services to customers. In many countries, such as the United Kingdom, revenue is referred to as turnover....
.

While NTT is listed on Tokyo, Osaka, Nagoya, Fukuoka, Sapporo, New York, and London stock exchanges, the Japanese government
Government of Japan
The government of Japan is a constitutional monarchy where the power of the Emperor is very limited. As a ceremonial figurehead, he is defined by the 1947 constitution as "the symbol of the state and of the unity of the people". Power is held chiefly by the Prime Minister of Japan and other elected...
still owns roughly one-third of NTT's shares
Share (finance)
A joint stock company divides its capital into units of equal denomination. Each unit is called a share. These units are offered for sale to raise capital. This is termed as issuing shares. A person who buys share/shares of the company is called a shareholder, and by acquiring share or shares in...
, regulated by the NTT Law (Law Concerning Nippon Telegraph and Telephone Corporation, Etc.). 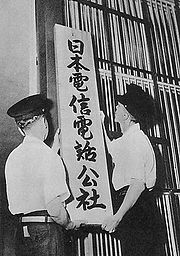 Established as a monopoly government-owned corporation
Government-owned corporation
A government-owned corporation, state-owned company, state-owned entity, state enterprise, publicly owned corporation, government business enterprise, or parastatal is a legal entity created by a government to undertake commercial activities on behalf of an owner government...
in 1953, was privatized
Privatization
Privatization is the incidence or process of transferring ownership of a business, enterprise, agency or public service from the public sector to the private sector or to private non-profit organizations...
in 1985 to encourage competition in the telecom market. In 1987, NTT made the largest stock offering
Initial public offering
An initial public offering or stock market launch, is the first sale of stock by a private company to the public. It can be used by either small or large companies to raise expansion capital and become publicly traded enterprises...
to date, at US$36.8 billion.

Because NTT owns most of the last mile
Last mile
The "last mile" or "last kilometer" is the final leg of delivering connectivity from a communications provider to a customer. The phrase is therefore often used by the telecommunications and cable television industries. The actual distance of this leg may be considerably more than a mile,...
, it enjoys oligopolistic
Oligopoly
An oligopoly is a market form in which a market or industry is dominated by a small number of sellers . The word is derived, by analogy with "monopoly", from the Greek ὀλίγοι "few" + πόλειν "to sell". Because there are few sellers, each oligopolist is likely to be aware of the actions of the others...
control over land lines in Japan. In order to weaken NTT, the company was divided into a holding company (NTT) and three telecom companies (NTT East, NTT West, and NTT Communications) in 1999. The NTT Law regulating NTT East and West requires them to serve only short distance communications and obligates them to maintain telephone service all over the country. They are also obligated to lease their unused optical fiber (dark fiber
Dark fiber
A dark fiber or unlit fiber is an unused Optical fiber, available for use in fiber-optic communication.The term dark fiber was originally used when referring to the potential network capacity of telecommunication infrastructure, but now also refers to the increasingly common practice of leasing...
) to other carriers at regulated rates. NTT Communications is not regulated by the NTT Law.

In July 2010, NTT and South Africa
South Africa
The Republic of South Africa is a country in southern Africa. Located at the southern tip of Africa, it is divided into nine provinces, with of coastline on the Atlantic and Indian oceans...
n IT company Dimension Data Holdings announced an agreement of a cash offer from NTT for Dimension Data's entire issued share capital, in £2.12bn ($3.24bn) deal.