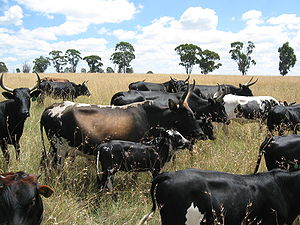 The Nguni cattle breed is indigenous to southern Africa
Africa
Africa is the world's second largest and second most populous continent, after Asia. At about 30.2 million km² including adjacent islands, it covers 6% of the Earth's total surface area and 20.4% of the total land area...
. A hybrid of indigenous and Indian cattle they were introduced by the Bantu tribes of southern Africa from the north of the continent. They are medium sized, adapted to grazing on the Highveld
Highveld
The Highveld is a high plateau region of inland South Africa which is largely home to the largest metropolitan area in the country, the Gauteng City Region, which accounts for one-third of South Africa's population.-Location and description:...
.

Nguni cattle
Cattle
Cattle are the most common type of large domesticated ungulates. They are a prominent modern member of the subfamily Bovinae, are the most widespread species of the genus Bos, and are most commonly classified collectively as Bos primigenius...
are known for their fertility and resistance to diseases, being the favourite breed amongst the indigenous Bantu people of Southern Africa (South Africa
South Africa
The Republic of South Africa is a country in southern Africa. Located at the southern tip of Africa, it is divided into nine provinces, with of coastline on the Atlantic and Indian oceans...
, Swaziland
Swaziland
Swaziland, officially the Kingdom of Swaziland , and sometimes called Ngwane or Swatini, is a landlocked country in Southern Africa, bordered to the north, south and west by South Africa, and to the east by Mozambique...
, Namibia
Namibia
Namibia, officially the Republic of Namibia , is a country in southern Africa whose western border is the Atlantic Ocean. It shares land borders with Angola and Zambia to the north, Botswana to the east and South Africa to the south and east. It gained independence from South Africa on 21 March...
, Zimbabwe
Zimbabwe
Zimbabwe is a landlocked country located in the southern part of the African continent, between the Zambezi and Limpopo rivers. It is bordered by South Africa to the south, Botswana to the southwest, Zambia and a tip of Namibia to the northwest and Mozambique to the east. Zimbabwe has three...
, Botswana
Botswana
Botswana, officially the Republic of Botswana , is a landlocked country located in Southern Africa. The citizens are referred to as "Batswana" . Formerly the British protectorate of Bechuanaland, Botswana adopted its new name after becoming independent within the Commonwealth on 30 September 1966...
and Angola
Angola
Angola, officially the Republic of Angola , is a country in south-central Africa bordered by Namibia on the south, the Democratic Republic of the Congo on the north, and Zambia on the east; its west coast is on the Atlantic Ocean with Luanda as its capital city...
). They are characterised by their multicoloured skin, which can present many different patterns, but their noses are always black-tipped. They are a principal form of Sanga cattle
Sanga cattle
Sanga cattle is the collective name for indigenous cattle of South Africa. They are sometimes identified as a subspecies with the scientific name Bos taurus africanus. These cattle originated in East Africa, probably western Ethiopia, and have spread west and south...
, which originated as hybrids of Zebu
Zebu
Zebu , sometimes known as humped cattle, indicus cattle, Cebu or Brahmin cattle are a type of domestic cattle originating in South Asia, particularly the Indian subcontinent. They are characterised by a fatty hump on their shoulders, drooping ears and a large dewlap...
and humpless cattle in East Africa. Protein analyses have shown that they are a combination of Zebu (Bos indicus) and Bos taurus, the European and indigenous African species. They are characterized by low cervico-thoracic humps, in front of the front legs, instead of the high thoracic humps of pure Zebu. Besides the various colour patterns, these animals present a variety of horn shapes. All different combinations were catalogued in the beginning of the century by a South African herd-master. This work inspired the Nguni Cattle Register, a compilation of terms to describe in full a Nguni cow or bull. The cattle are medium sized, with bulls weighing between 500 kg and 600 kg, while cows weigh between 300 kg and 400 kg.

The ancestors of Nguni cattle were brought by the Xhosa, Zulu and Swazi people, during their migration to South Africa
South Africa
The Republic of South Africa is a country in southern Africa. Located at the southern tip of Africa, it is divided into nine provinces, with of coastline on the Atlantic and Indian oceans...
between 600 and 700 AD. Since then, these animals have played an important social and economic role in the development of these societies and are used as a bride's dowry. The number of animals held by a village or individual determined much of their importance to the rest of the world. King Shaka
Shaka
Shaka kaSenzangakhona , also known as Shaka Zulu , was the most influential leader of the Zulu Kingdom....
of the Zulus understood this cultural and economic importance and seized control of the Nguni herds on his dominions. Shaka also bred the Ngunis according to colour patterns in order to produce skins for the several regiments of his army, henceforward recognized by them. His elite personal guard was recognised by pure white, from animals of the royal herd, the inyonikayiphumuli.

The colour of those breeds of cattle
Cattle
Cattle are the most common type of large domesticated ungulates. They are a prominent modern member of the subfamily Bovinae, are the most widespread species of the genus Bos, and are most commonly classified collectively as Bos primigenius...
have many different patterns such as white
White
White is a color, the perception of which is evoked by light that stimulates all three types of color sensitive cone cells in the human eye in nearly equal amounts and with high brightness compared to the surroundings. A white visual stimulation will be void of hue and grayness.White light can be...
, brown
Brown
Brown is a color term, denoting a range of composite colors produced by a mixture of orange, red, rose, or yellow with black or gray. The term is from Old English brún, in origin for any dusky or dark shade of color....
, golden yellow, black
Black
Black is the color of objects that do not emit or reflect light in any part of the visible spectrum; they absorb all such frequencies of light...
, dappled, or spotty
Spotty
Spotty may refer to:* Sharptooth houndshark, a fish Triakis megalopterus* Australian spotted mackerel, a fish Scomberomorus munroi* New Zealand spotty, a fish Notolabrus celidotus* Superted's sidekick...
.
The source of this article is wikipedia, the free encyclopedia.  The text of this article is licensed under the GFDL.