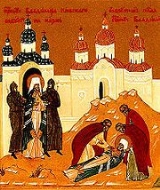 Encyclopedia
The title of New Martyr or Neomartyr of the Eastern Orthodox Church
Eastern Orthodox Church
The Orthodox Church, officially called the Orthodox Catholic Church and commonly referred to as the Eastern Orthodox Church, is the second largest Christian denomination in the world, with an estimated 300 million adherents mainly in the countries of Belarus, Bulgaria, Cyprus, Georgia, Greece,...
was originally given to martyr
Martyr
A martyr is somebody who suffers persecution and death for refusing to renounce, or accept, a belief or cause, usually religious.-Meaning:...
s who died under heretical
Heresy
Heresy is a controversial or novel change to a system of beliefs, especially a religion, that conflicts with established dogma. It is distinct from apostasy, which is the formal denunciation of one's religion, principles or cause, and blasphemy, which is irreverence toward religion...
rulers (the original martyrs being under pagans
Paganism
Paganism is a blanket term, typically used to refer to non-Abrahamic, indigenous polytheistic religious traditions....
). Later the Church added to the list those martyred under Islam
Islam
Islam . The most common are and .   : Arabic pronunciation varies regionally. The first vowel ranges from ~~. The second vowel ranges from ~~~...
and various modern regimes, especially Communist ones, which espoused state atheism
State atheism
State atheism is the official "promotion of atheism" by a government, sometimes combined with active suppression of religious freedom and practice...
. Officially, the era of the New Martyrs begins with the fall of Constantinople
Fall of Constantinople
The Fall of Constantinople was the capture of the capital of the Byzantine Empire, which occurred after a siege by the Ottoman Empire, under the command of Ottoman Sultan Mehmed II, against the defending army commanded by Byzantine Emperor Constantine XI...
in 1453. Among those commemorated are not only those who gave their lives in martyrdom, but also those who are accounted as confessor
Confessor
-Confessor of the Faith:Its oldest use is to indicate a saint who has suffered persecution and torture for the faith, but not to the point of death. The term is still used in this way in the East. In Latin Christianity it has come to signify any saint, as well as those who have been declared...
s for the Orthodox Faith.

In the Orthodox Church, the third Sunday after Pentecost
Pentecost
Pentecost is a prominent feast in the calendar of Ancient Israel celebrating the giving of the Law on Sinai, and also later in the Christian liturgical year commemorating the descent of the Holy Spirit upon the disciples of Christ after the Resurrection of Jesus...
is known as the "Commemoration of All New Martyrs of the Turkish Yoke."

In the Russian Orthodox Church
Russian Orthodox Church
The Russian Orthodox Church or, alternatively, the Moscow Patriarchate The ROC is often said to be the largest of the Eastern Orthodox churches in the world; including all the autocephalous churches under its umbrella, its adherents number over 150 million worldwide—about half of the 300 million...
, the Sunday closest to January 25 (February 7 on the Gregorian Calendar
Gregorian calendar
The Gregorian calendar, also known as the Western calendar, or Christian calendar, is the internationally accepted civil calendar. It was introduced by Pope Gregory XIII, after whom the calendar was named, by a decree signed on 24 February 1582, a papal bull known by its opening words Inter...
) is the "Sunday of the Holy New Martyrs and Confessors of Russia." The date of January 25 was chosen because that was the date in 1918 of the martyrdom of St. Vladimir (Bogoiavlensikii)
Vladimir, Metropolitan of Moscow
Vladimir ; baptismal name: Vasily Nikiforovich Bogoyavlensky was Metropolitan of Kiev and Gallich , Metropolitan of Moscow ....
, Metropolitan
Metropolitan bishop
In Christian churches with episcopal polity, the rank of metropolitan bishop, or simply metropolitan, pertains to the diocesan bishop or archbishop of a metropolis; that is, the chief city of a historical Roman province, ecclesiastical province, or regional capital.Before the establishment of...
of Kiev
Kiev
Kiev or Kyiv is the capital and the largest city of Ukraine, located in the north central part of the country on the Dnieper River. The population as of the 2001 census was 2,611,300. However, higher numbers have been cited in the press....
, who is referred to as the "Protomartyr of the communist yoke in Russia."

The feast of "All New Martyrs of Serbia" is celebrated on June 15 (June 28 on the Gregorian calendar).

New Martyrs of the Boxer Rebellion