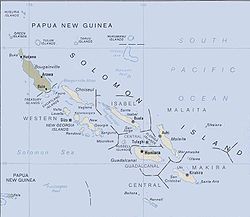 New Georgia Sound is the body of water that runs approximately through the middle of the Solomon Islands
Solomon Islands
Solomon Islands is a sovereign state in Oceania, east of Papua New Guinea, consisting of nearly one thousand islands. It covers a land mass of . The capital, Honiara, is located on the island of Guadalcanal...
. The Sound is bounded by Choiseul Island
Choiseul Island
Choiseul Island, native name Lauru, is the largest island of the Choiseul Province, Solomon Islands, at .-Description:This island is named after Étienne François, duc de Choiseul....
, Santa Isabel Island
Santa Isabel Island
Santa Isabel Island is the longest in the Solomon Islands, South Pacific, and the largest in the group of islands in Isabel Province.-Location and geographic data:...
, and Florida Island to the north, and by Vella Lavella
Vella Lavella
Vella Lavella is an island in the Western Province of the Solomon Islands. It lies to the west of New Georgia, but is considered one of the New Georgia Group...
, Kolombangara
Kolombangara
Kolombangara is an island in the New Georgia Islands group of the Solomon Islands in the southwestern Pacific Ocean...
, New Georgia
New Georgia
New Georgia is the largest island of the Western Province of the Solomon Islands.-Geography:This island is located in the New Georgia Group, an archipelago including most of the other larger islands in the province...
, and the Russell Islands
Russell Islands
The Russell Islands are two small islands, as well as several islets, of volcanic origin, in the Central Province of the Solomon Islands. They are located approximately 48 km northwest from Guadalcanal. The islands are partially covered in coconut plantations, and have a copra and oil factory at...
to the south. Bougainville
Bougainville Island
Bougainville Island is the main island of the Autonomous Region of Bougainville of Papua New Guinea. This region is also known as Bougainville Province or the North Solomons. The population of the province is 175,160 , which includes the adjacent island of Buka and assorted outlying islands...
and Guadalcanal
Guadalcanal
Guadalcanal is a tropical island in the South-Western Pacific. The largest island in the Solomons, it was discovered by the Spanish expedition of Alvaro de Mendaña in 1568...
define western and eastern ends of the sound, respectively.

During World War II
World War II
World War II, or the Second World War , was a global conflict lasting from 1939 to 1945, involving most of the world's nations—including all of the great powers—eventually forming two opposing military alliances: the Allies and the Axis...
the Sound was known as "the Slot" by Allied
Allies
In everyday English usage, allies are people, groups, or nations that have joined together in an association for mutual benefit or to achieve some common purpose, whether or not explicit agreement has been worked out between them...
combatants due to its geographical shape and the amount of warship traffic that traversed it. The Japanese naval efforts to resupply their garrison on Guadalcanal were referred to as the Tokyo Express
Tokyo Express
The Tokyo Express was the name given by Allied forces to the use of Imperial Japanese Navy ships at night to deliver personnel, supplies, and equipment to Japanese forces operating in and around New Guinea and the Solomon Islands during the Pacific campaign of World War II...
. A large number of naval battles
Solomon Islands campaign
The Solomon Islands campaign was a major campaign of the Pacific War of World War II. The campaign began with Japanese landings and occupation of several areas in the British Solomon Islands and Bougainville, in the Territory of New Guinea, during the first six months of 1942...
were fought in and around the sound during 1942 and 1943, between the Imperial Japanese Navy
Imperial Japanese Navy
The Imperial Japanese Navy was the navy of the Empire of Japan from 1869 until 1947, when it was dissolved following Japan's constitutional renunciation of the use of force as a means of settling international disputes...
, and the allied forces of the United States Navy
United States Navy
The United States Navy is the naval warfare service branch of the United States Armed Forces and one of the seven uniformed services of the United States. The U.S. Navy is the largest in the world; its battle fleet tonnage is greater than that of the next 13 largest navies combined. The U.S...
, Royal Australian Navy
Royal Australian Navy
The Royal Australian Navy is the naval branch of the Australian Defence Force. Following the Federation of Australia in 1901, the ships and resources of the separate colonial navies were integrated into a national force: the Commonwealth Naval Forces...
, and Royal New Zealand Navy
Royal New Zealand Navy
The Royal New Zealand Navy is the maritime arm of the New Zealand Defence Force...
.