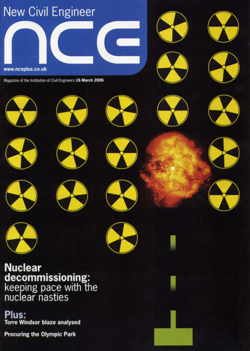 New Civil Engineer is the weekly magazine of the Institution of Civil Engineers
Institution of Civil Engineers
Founded on 2 January 1818, the Institution of Civil Engineers is an independent professional association, based in central London, representing civil engineering. Like its early membership, the majority of its current members are British engineers, but it also has members in more than 150...
, (ICE) the UK charter
Charter
A charter is the grant of authority or rights, stating that the granter formally recognizes the prerogative of the recipient to exercise the rights specified...
ed body that oversees the practice of civil engineer
Civil engineer
A civil engineer is a person who practices civil engineering; the application of planning, designing, constructing, maintaining, and operating infrastructures while protecting the public and environmental health, as well as improving existing infrastructures that have been neglected.Originally, a...
ing in the UK. It is published by EMAP
EMAP
Emap Limited is a British media company, specialising in the production of business-to-business magazines, and the organisation of business events and conferences...
who acquired the title and editorial control from the ICE in 1995. Available in print and online after the appropriate subscription has been taken out (it is free for members of the ICE), the magazine is aimed at professionals in the civil engineering industry. It contains news from the industry, analysis of recent news and issues, letters from subscribers, a directory of companies, with listings arranged by the company’s area of work, and an appointments section. It also occasionally has details of university courses and graduate positions.