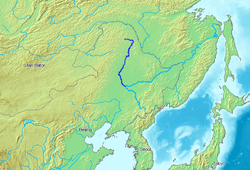 Nen River or Nenjiang or Nonni (Manchu
Manchu language
Manchu is a Tungusic endangered language spoken in Northeast China; it used to be the language of the Manchu, though now most Manchus speak Mandarin Chinese and there are fewer than 70 native speakers of Manchu out of a total of nearly 10 million ethnic Manchus...
: Non ula) is a river in Northeast China
Northeast China
Northeast China, historically known in English as Manchuria, is a geographical region of China, consisting of the three provinces of Liaoning, Jilin and Heilongjiang. The region is sometimes called the Three Northeast Provinces...
. The Nen River flows through the northern part of Heilongjiang
Heilongjiang
For the river known in Mandarin as Heilong Jiang, see Amur River' is a province of the People's Republic of China located in the northeastern part of the country. "Heilongjiang" literally means Black Dragon River, which is the Chinese name for the Amur. The one-character abbreviation is 黑...
Province and the northeastern section of Inner Mongolia
Inner Mongolia
Inner Mongolia is an autonomous region of the People's Republic of China, located in the northern region of the country. Inner Mongolia shares an international border with the countries of Mongolia and the Russian Federation...
, some parts of the river forming the border between the two regions. At 1370 kilometres (850 mi) in length, the Nen River is the longest tributary of the Songhua River
Songhua River
The Songhua or Sunggari River is a river in Northeast China, and is the largest tributary of the Heilong River , flowing about from Changbai Mountains through Jilin and Heilongjiang provinces. The river drains of land, and has an annual discharge of .As the Second Songhua River, it joins the...
.

The Nen River flows in the general southern direction in a wide valley between the Greater Khingan
Greater Khingan
The Greater Khingan Range , also called the Greater Hing'an Range or Greater Hinggan Range, is a volcanic mountain range in the northeastern part of the People's Republic of China. The range extends roughly 1,200 km from north to south, narrowing towards the south...
and the Lesser Khingan
Lesser Khingan
Lesser Khingan is a mountain range in China's Heilongjiang Province and the adjacent parts of Russia's Amur Oblast and Jewish Autonomous Oblast....
mountain ranges in the west and east, respectively, and meets the Second Songhua River
Second Songhua River
The Second Songua River is a tributary of the Songhua River in Jilin Province, China. The river meets the Songhua and Nen Rivers near Songyuan and has several tributaries to include the First Dao, the Second Dao, Huifa, Yinma, Yitong and Lafa Rivers. It is interrupted by the Baishan, Hongshi and...
near Da'an
Da'an
Da'an is a fictional character in the science fiction television series Earth: Final Conflict, played by Leni Parker. He is a member of the Taelon race, an androgynous race of energy beings...
to form the Songhua River .

Major tributaries of the Nen River include:


Cities on the Nen River

During the Qing Dynasty
Qing Dynasty
The Qing Dynasty was the last dynasty of China, ruling from 1644 to 1912 with a brief, abortive restoration in 1917. It was preceded by the Ming Dynasty and followed by the Republic of China....
the Nenjiang provided an important communication route between southern Manchuria
Manchuria
Manchuria is a historical name given to a large geographic region in northeast Asia. Depending on the definition of its extent, Manchuria usually falls entirely within the People's Republic of China, or is sometimes divided between China and Russia. The region is commonly referred to as Northeast...
and the cities of Qiqihar
Qiqihar
- Subdivisions :Qiqihar is divided into 16 divisions: 7 districts , 8 counties and 1 county-level city .-Economy:...
and Mergen
Nenjiang County
Nenjiang County is a county under the administration of Heihe City in northwestern Heilongjiang province, Northeast China. It is located on the river of the same name , which also forms part of the provincial border with Inner Mongolia, more than southwest of the urban area of Heihe...
, both of which served at various points as capitals of the Qing Heilongjiang. A portage road connected the upper reaches of the Nenjiang with Aigun
Aigun
Aigun was a historic town of China in northern Manchuria, situated on the right bank of the Amur River, some 30 km south from the central urban area of Heihe .The Chinese name of the town, which literally means "Bright Jade", is a transliteration of the original Manchu Aigun was a historic...
on the Amur as well.